As usual it seems I am behind on my audiobook reviews since they are just ones I'm listening to for fun, not for tours or anything.  Four of them below are part of a series, but really, they all kind of equal one book when put together because they are shorter stories.


Shopping for a Billionaire #1 by Julia Kent: 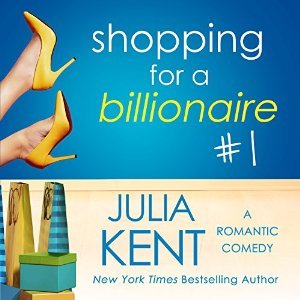 I loved the books I read by Julia Kent starting with Fluffy, so I thought I'd better get back to reading this series which I had heard of and seen around a lot, but never got to.  I saw it was available in Audible Escapes, so I got it that way to check it out. And I really adored it!  So funny all the things that Shannon got into.  And I loved that there was a reference to Sam Heughan in the book, because all of us Outlander show fans adore him.  It was a blast and so much fun, but it was very short, I guess maybe these are serials?  So anyway, that was my main issue with it, was the length.

Here is the blurb from Goodreads:
When mystery shopper Shannon Jacoby meets billionaire Declan McCormick with her hand down a toilet in the men's room of one of his stores, it's love at first flush in this hilarious new romantic comedy from New York Times bestselling author Julia Kent.


Shopping for a Billionaire #2 by Julia Kent: 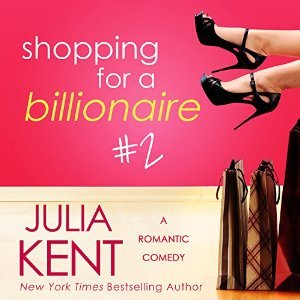 This next part of the story had some really good pop culture quotes and references. For example, loved the Glee references, Caddyshack, and even Ivan Denisovitch bit.  That last one is a book the students at my school read every year for their summer reading, so it was funny to hear a book I'd never even heard about until I got here be referenced like that.  Not to mention there was a hilarious tampon joke in the story as well.  Once again, I'd wished it was longer!

Here is the blurb from Goodreads:
New York Times bestselling author Julia Kent continues her Shopping for a Billionaire series as mystery shopper Shannon and (near) billionaire Declan explore a relationship (and each other).

The pair deal with a jealous ex-boyfriend, a new perk at work that makes Shannon rethink her job, and a cat that offers up quite a present when Declan takes Shannon out for their first non-business date.

**Part 1 can be found in A Sweet Life, a New York Times bestselling, 14-author boxed set. All proceeds from that boxed set go to diabetes research.**

Shopping for a Billionaire #3 by Julia Kent: 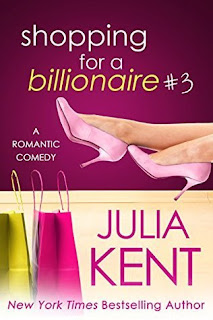 This book started out pretty good, but it got kind of boring about halfway through.  Toward the end however, it picked back up and I was eager to start the final book and find out how everything was going to go.

Here is the blurb from Goodreads:
I don't turn every date into a medical emergency, but when I do, I nearly castrate my man... Shannon and Declan's first real date ends with an ambulance trip and yet another test of their madcap relationship. Ex-boyfriend Steve insists on dinner with Shannon while Declan is overseas on business, but a surprise return leads to plenty of romance as Declan whisks her away for a ride over Boston (in more ways than one...). Just as life and love look good, a misunderstanding takes on a sinister tone as a conspiracy brews to keep them apart. Julia Kent's hilarious Shopping series continues. Part 3 of a 4-part series.

Shopping for a Billionaire #4 by Julia Kent: 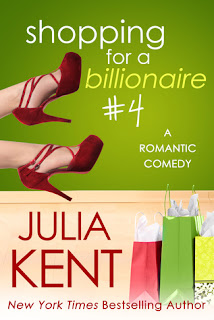 So we got a lot of the things that totally irritate me in romance books, the jumping to conclusions, not knowing why someone is acting the way they are. And then the stupid reasons for not dating someone.  But, Kent makes all of that okay in my book in the end because of the hilarious situations she puts the characters in.  I mean the luxury shopping job at the hotel, all of that was so funny!  The vibrator that took off out the window, the trash can dumping on the car, so funny.  Now I think those Dr. Pimple Popper type of shows are disgusting, so I don't get why people would watch that when they were depressed. Because ewwwwwww!!!   But in the end, the whole series wrapped up perfectly for me.  That's why I ended up with a 4.5 instead of just a 4 star rating for this one.  Now I know I'll have to find all the other books that are extras for this series and catch up with Shannon and Declan.

Here is the blurb from Goodreads:
A confusing fight, a garbage-covered car, and a mom who shares her past as a stripper all drive Shannon to the edge of madness. When her big shot at mystery shopping luxury properties leads to another crazy toilet incident, it’s Declan to the rescue...but can they take the “plunge”? The Shopping series from New York Times bestselling author Julia Kent reaches its conclusion with heart, heat, and hilarity. 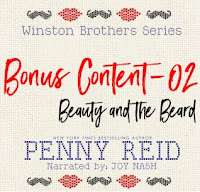 I loved this really short story about Ashley packing up and waiting for Drew to come help move her to live with him.  All of it was sweet, and also we definitely got the steam at the end.  While it was still pretty darn short, there was so much of what I love in a Penny Reid book, that I had to give it the full 5 star rating.

Here is the blurb from Goodreads:
Beauty and the Beard is a short originally included in the lminited release Scenes from the City in 2015. It is now included in Neanderthal Seeks Extra Yarns. 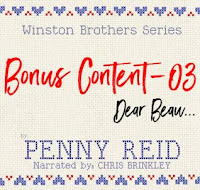 Very, very, very short.  A letter for sure.  Fun, but just too short. When it comes to anything to do with the Winston brothers, I will always want more.

Here is the blurb from Goodreads:
In 2017 Kindle Direct Publishing posted a call for goodbye letters from characters and I felt inspired to write this letter from Duane to Beau before Duane leaves for Italy. 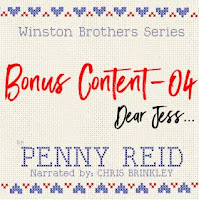 Still pretty short.  A letter for sure.  I liked it a little better than the letter to Beau, maybe the romance comes through better since this was to his woman.


Here is the blurb from Goodreads:
In 2016 True Story Book Blog requested I write a love note for a blog feature from one of my characters. I wrote this letter from Duane to Jess while they are in Italy.

The A.I. Who Loved Me by Alyssa Cole: 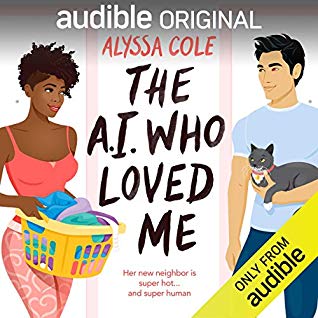 So it took me a bit to get into it.  I'm not sure we really needed all the different narrators they had for this.  Because on some of the chapters, the main narrator just did all the voices.  I did love when we got Mindy Kaling though to do the house's A.I. system voice.  At times I did get a bit bored because the narrator's voices were kind of slow at times, or maybe it was how the story was written.  There were also sound effects from flashbacks, something weird that you don't usually hear in audiobooks, so that pulled me out of the story a bit too.  Overall I enjoyed it, but don't know if this is one author who I should read the physical books instead of listening to them on audio, if they are available as print books that is.

Here is the blurb from Goodreads:
A captivating romantic comedy with a thrilling sci-fi twist by award-winning author Alyssa Cole!

Trinity Jordan leads a quiet, normal life: working from home for the Hive, a multifunctional government research center, and recovering from the incident that sent her into a tailspin. But the life she’s trying to rebuild is plagued by mishaps when Li Wei, her neighbor’s super sexy and super strange nephew, moves in and turns things upside down. Li Wei’s behavior is downright odd—and the attraction building between them is even more so. When an emergency pulls his aunt away from the apartment complex, Trinity decides to keep an eye on him…and slowly discovers that nothing is what it seems. For one thing, Li Wei isn’t just the hot guy next door—he’s the hot A.I. next door. In fact, he’s so advanced that he blurs the line between man and machine. It’s up to Trinity to help him achieve his objective of learning to be human, but danger is mounting as they figure out whether he’s capable of the most illogical human behavior of all…falling in love.


The Hook-Up Experiment by Emma Hart: 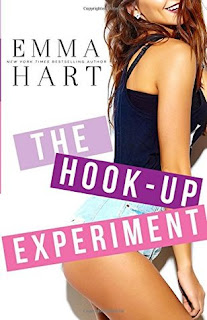 I feel like really this is part of a series with one of the first Emma Hart books I read, The Upside to Being Single.  And if you read the whole synopsis below, it does say that our main character, Peyton, is in that story.  But I guess it isn't technically a part of a series with that one.  Doesn't matter though because I still loved it!  The characters were so great.  A lot of things about Peyton totally reminded me of myself.  Also, I think her bet is possible, three times without falling in love, but not with someone you already have such a history with!  Someone you'd had a crush on, and then when we find out he has a daughter?  An adorable little daughter?  How is that not just totally something you wouldn't automatically fall in love with?  There was so much fun in this story, and I totally loved the scenes with Chloe and Peyton's brother as well, so I can't wait to read their story at some point too.  Once again Emma Hart totally makes me love her stories and pretty much has sealed herself as one of my all-time favorite authors, probably auto-buy!

Here is the blurb from Goodreads:
1. Hate-screw my high school nemesis.
2. Remember to hate him.
3. Prove my brother wrong.
It should be easy.
It isn’t.

As the owner of Pick-A-D*ck, New Orleans’ premier hook-up website, my job is simple. Connect two people for a no-strings, no-expectations hook-up. The plus for my clients is that I’m the one who gets to sift through the d*ck pics—except this time, they're required.

My problem? My brother, co-owner of Pick-A-D*ck’s sister dating site, doesn’t believe it’s possible to hook up with someone three times and not fall in love.
I disagree. I know it’s possible.

And my disagreement is exactly how I end up reconnected with my high school nemesis, Elliott Sloane. The guy who asked me to junior prom and then stood me up. Who egged my car when I rejected him, and convinced my senior homecoming date to ghost me.

It should be easy to hate-screw him. If only he was still that person, instead of a hot-as-hell single dad, working as a builder to make ends’ meet, fighting for custody of his daughter.

(The Hook-Up Experiment is book one of the Experiment duet. If you've read The Upside to Being Single, this is Peyton's story.)
Posted by Lisa Mandina at 7:00 AM