Back to joining up with the Waiting on Wednesday Posts, and the Can't Wait Wednesday posts hosted by Wishful Endings.  The amount of good looking books coming out is back up at the beginning of the year! 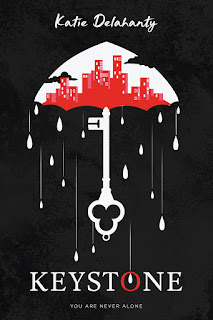 Sounds very appropriate for the social media issues of today.  Plus, what a cool cover!  I should be posting a review of this on Saturday!

When Ella Karman debuts on the Social Stock Exchange, she finds out life as a high-profile "Influencer" isn't what she expected. Everyone around her is consumed by their rankings, in creating the smoke and mirrors that make them the envy of the world.

But then Ella’s best friend betrays her, her rankings tank, and she loses—everything.

Leaving her old life behind, she joins Keystone, a secret school for thieves, where students are being trained to steal everything analog and original because something—or someone—is changing history to suit their needs.

Partnered with the annoyingly hot—and utterly impossible—Garrett Alexander, who has plenty of his own secrets, Ella is forced to return to the Influencer world, while unraveling a conspiracy that began decades ago.

One wrong move and she could lose everything—again. 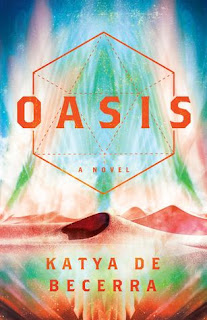 Read this for a blog tour and HERE is my review.

The oasis saved them. But who will save them from the oasis?

Alif had exciting summer plans: working on her father’s archaeological dig site in the desert with four close friends . . . and a very cute research assistant. Then the sandstorm hit.

With their camp wiped away, Alif and the others find themselves lost on the sands, seemingly doomed . . . until they find the oasis. It has everything they need: food, water, shade—and mysterious ruins that hide a deadly secret. As reality begins to shift around them, they question what’s real and what’s a mirage.

The answers turn Alif and her friends against one another, and they begin to wonder if they’ve truly been saved. And while it was easy to walk into the oasis, it may be impossible to leave . . .

Katya de Becerra’s new supernatural thriller hides a mystery in plain sight, and will keep you guessing right up to its terrifying conclusion. 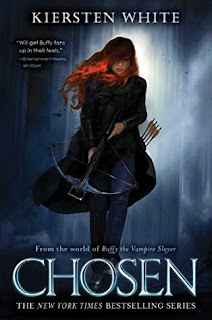 Because I need all things to do with Buffy and of course I loved the first book.  Finished reading before this post and HERE is my review!

Nina continues to learn how to use her slayer powers against enemies old and new in this second novel in the New York Times bestselling series from Kiersten White, set in the world of Buffy the Vampire Slayer.

Now that Nina has turned the Watcher’s Castle into a utopia for hurt and lonely demons, she’s still waiting for the utopia part to kick in. With her sister Artemis gone and only a few people remaining at the castle—including her still-distant mother—Nina has her hands full. Plus, though she gained back her Slayer powers from Leo, they’re not feeling quite right after being held by the seriously evil succubus Eve, a.k.a. fake Watcher’s Council member and Leo’s mom.

And while Nina is dealing with the darkness inside, there’s also a new threat on the outside, portended by an odd triangle symbol that seems to be popping up everywhere, in connection with Sean’s demon drug ring as well as someone a bit closer to home. Because one near-apocalypse just isn’t enough, right?

The darkness always finds you. And once again, it’s coming for the Slayer. 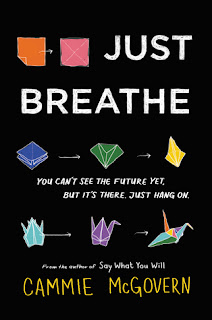 From the critically acclaimed author of A Step Toward Falling and Say What You Will comes a new YA standalone about mental health, chronic illness, and two teenagers learning to deal with both while falling for each other, perfect for fans of Five Feet Apart.

David Sheinman is the popular president of his senior class, battling cystic fibrosis.

Jamie Turner is a quiet sophomore, struggling with depression.

The pair soon realizes that they can be their true selves with each other, and their unlikely friendship develops into something so much more. But neither Jamie nor David can bring themselves to reveal the secrets that weigh most heavily on their hearts—and their time for honesty may be running out. 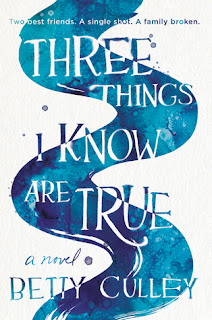 This moving debut novel in verse about a teenage girl dealing with the aftermath of an accident that nearly takes her brother’s life is a stunning exploration of grief and the power of forgiveness.

The reminder is always there—a dent on the right side of Jonah’s forehead. The spot you’d press when you felt a headache coming on. The bullet tore away bone, the way dynamite blasts rock—leaving a soft crater.

Life changes forever for Liv when her older brother, Jonah, accidentally shoots himself with his best friend Clay’s father’s gun. Now Jonah needs round-the-clock care just to stay alive, and Liv seems to be the only person who can see that her brother is still there inside his broken body.

With Liv’s mom suing Clay’s family, there are divisions in the community that Liv knows she’s not supposed to cross. But Clay is her friend, too, and she refuses to turn away from him—just like she refuses to give up on Jonah. 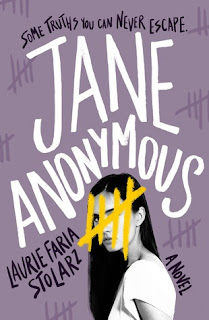 This one sounds like it could be intense and emotional.

Bestselling author Laurie Faria Stolarz returns with Jane Anonymous, a gripping tale of a seventeen-year-old girl’s kidnapping and her struggle to fit back into her life after she escapes.

Then, “Jane” was just your typical 17-year-old in a typical New England suburb getting ready to start her senior year. She had a part-time job she enjoyed, an awesome best friend, overbearing but loving parents, and a crush on a boy who was taking her to see her favorite band. She never would’ve imagined that in her town where nothing ever happens, a series of small coincidences would lead to a devastating turn of events that would forever change her life. 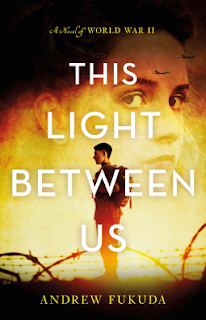 I am really starting to read more of this aspect of World War II, and this one sounds good.

From award-winning YA author Andrew Fukuda comes The Light Between Us, a powerfully affecting story of World War II about the unlikeliest of pen pals--a Japanese American boy and a French Jewish girl--as they fight to maintain hope in a time of war.

"I remember visiting Manzanar Camp in California and standing in the windswept plains where over ten thousand internees were once imprisoned, their voices cut off. I remember how much I wanted to write a story that did right by them. Hopefully this book delivers."--Andrew Fukuda

In 1935, ten-year-old Alex Maki from Bainbridge Island, Washington is disgusted when he's forced to become pen pals with Charlie Levy of Paris, France--a girl. He thought she was a boy. In spite of Alex's reluctance, their letters continue to fly across the Atlantic--and along with them the shared hopes and dreams of friendship. Until the Japanese attack on Pearl Harbor and the growing Nazi persecution of Jews force them to confront the darkest aspects of human nature.

From the desolation of an internment camp on the plains of Manzanar to the horrors of Auschwitz and the devastation of European battlefields, the only thing they can hold onto are the memories of their letters. But nothing can dispel the light between them. 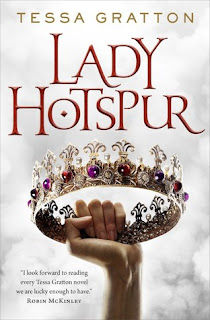 So, I love this author.  And to be completely honest, I haven't completely finished the book that this is a companion to, it is sitting by my bedside. But I know I'll want to read this one, and since it isn't a sequel exactly, I can do it without finishing the first one.

Hal was once a knight, carefree and joyous, sworn to protect her future queen Banna Mora. But after a rebellion led by her own mother, Caleda, Hal is now the prince of Lionis, heir to the throne. The pressure of her crown and bloody memories of war plague her, as well as a need to shape her own destiny, no matter the cost.

Lady Hotspur, known as the Wolf of Aremoria for her temper and warcraft, never expected to be more than a weapon. She certainly never expected to fall in love with the fiery Hal or be blindsided by an angry Queen’s promise to remake the whole world in her own image—a plan Hotspur knows will lead to tragedy.

Banna Mora kept her life, but not her throne. Fleeing to Innis Lear to heal her heart and plot revenge, the stars and roots of Innis Lear will teach her that the only way to survive a burning world is to learn to breathe fire.

These three women, together or apart, are the ones who have the power to bring the once-powerful Aremoria back to life—or destroy it forever. 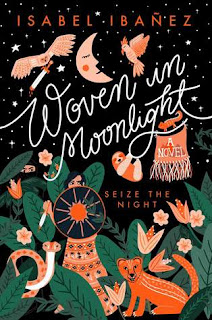 I love stories like this that introduce me to history and cultures that I may not be familiar with. And that cover is so gorgeous!

A lush tapestry of magic, romance, and revolución, drawing inspiration from Bolivian politics and history.

Ximena is the decoy Condesa, a stand-in for the last remaining Illustrian royal. Her people lost everything when the usurper, Atoc, used an ancient relic to summon ghosts and drive the Illustrians from La Ciudad. Now Ximena’s motivated by her insatiable thirst for revenge, and her rare ability to spin thread from moonlight.

When Atoc demands the real Condesa’s hand in marriage, it’s Ximena’s duty to go in her stead. She relishes the chance, as Illustrian spies have reported that Atoc’s no longer carrying his deadly relic. If Ximena can find it, she can return the true aristócrata to their rightful place.

She hunts for the relic, using her weaving ability to hide messages in tapestries for the resistance. But when a masked vigilante, a warm-hearted princess, and a thoughtful healer challenge Ximena, her mission becomes more complicated. There could be a way to overthrow the usurper without starting another war, but only if Ximena turns her back on revenge—and her Condesa. 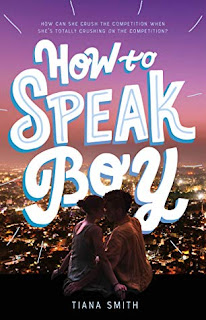 Quinn and Grayson have been fierce speech and debate rivals for years. They can't stand one another, either in competition or in real life.

But when their AP Government teacher returns their school assignments to the wrong cubbies, they begin exchanging anonymous notes without knowing who the other is.

Despite their differences, the two come together through their letters and find themselves unknowingly falling for the competition. Before the state tournament, the two of them need to figure out what they want out of life, or risk their own future happiness. After all, what’s the point of speech and debate if you can't say what's in your heart?


Final Thoughts:
Whew!  2020 is starting off with a lot of new and great sounding books!  Have you read any of these yet?  Are they on your TBR?  And hey, while you're here, you should go try to win some of my ARCs from Cleaning Up My TBR Post HERE.  The US only giveaway is open till Friday at midnight, there are even some 2019 ARCs that can be one of your two choices.