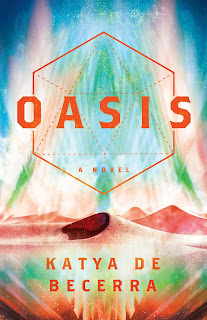 
The oasis saved them. But who will save them from the oasis?


Alif had exciting summer plans: working on her father’s archaeological dig site in the desert with four close friends . . . and a very cute research assistant. Then the sandstorm hit.


With their camp wiped away, Alif and the others find themselves lost on the sands, seemingly doomed . . . until they find the oasis. It has everything they need: food, water, shade—and mysterious ruins that hide a deadly secret. As reality begins to shift around them, they question what’s real and what’s a mirage.


The answers turn Alif and her friends against one another, and they begin to wonder if they’ve truly been saved. And while it was easy to walk into the oasis, it may be impossible to leave . . .


Katya de Becerra’s new supernatural thriller hides a mystery in plain sight, and will keep you guessing right up to its terrifying conclusion.

My Review:
I've been intrigued for this one since I first saw it.  And overall I really enjoyed the book.  In the end it had the kind of vague/not definite ending that while can be okay, and I know a lot of people like, I'm not the hugest fan of.  I kind of like my endings tied up in little bows as much as possible.  Or at least to know what happened.  But the whole story up to that point was so good that I could barely put it down.  I loved the dig site parts, and the friendships and tension between the group was well done also.  There were some twists and turns that I didn't see coming, and that is something that I do really like in a story.  It was good to get the back stories of some of the characters to understand their motivation, but I do feel like we needed more about one of them, Luke, and maybe also Minh.  The oasis itself was fascinating and how the author described it was very vivid and kept you guessing at what was next.  The possible alien/ancient god aspect was a little iffy for me, I almost needed a little more of that.  I had a hard time deciding what to rate this.  I wavered between a 3.5 and 4 star rating.  In the end I am giving this 4 stars, because what happened at the end may just be a personal issue that I had, and I can see that a lot of other people might enjoy that, and it was very well written, and had a lot that kept me turning pages as fast as I could hoping to find out all the answers. 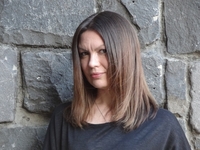 Katya de Becerra was born in Russia, studied in California, lived in Peru, and then stayed in Australia long enough to become a local. She was going to be an Egyptologist when she grew up, but instead she earned a PhD in Anthropology and now works as a university lecturer and a researcher. Katya is a short version of her real name, which is very long and gets mispronounced a lot. What The Woods Keep was her first novel (out now), which is followed by another standalone Oasis in 2020. She has also authored and co-authored academic articles, book chapters, guest posts and opinion pieces.