Blog Tour Review with Giveaway: You Too? - 25 Voices Share Their #MeToo Stories - Edited by Janet Gurtler 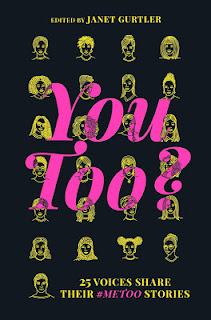 When #MeToo went viral, Janet Gurtler was among the millions of people who began to reflect on her past experiences. Things she had reluctantly accepted—male classmates groping her at recess, harassment at work—came back to her in startling clarity. She needed teens to know what she had not: that no young person should be subject to sexual assault, or made to feel unsafe, less than or degraded.

You Too? was born out of that need. By turns thoughtful and explosive, these personal stories encompass a wide range of experiences and will resonate with every reader who has wondered, “Why is this happening to me?” or secretly felt that their own mistreatment or abuse is somehow their fault—it’s not. Candid and empowering, You Too? is written for teens, but also an essential resource for the adults in their lives—an urgent, compassionate call to listen and create change.