Gah!  This time of the school year is so busy, and with the weather getting nicer, it's harder to stay as ahead on my blog and reviews as I'd like. BUT, hey, I'm keeping up, kind of, by getting all the reviews of romances that are not part of a blog tour in this post! 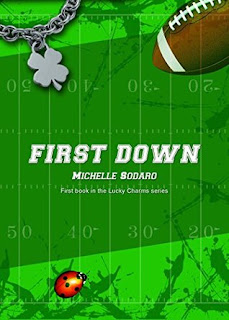 This is an author who used to be a good friend of mine.  She was an inspiration for me to write myself and actually I credit her for the reason I finished my first story ever the year she and I did NaNoWriMo as writing buddies.  However, our friendship suffered a couple years ago when she did not like the reviews I'd posted of her books.  In fact she told me I didn't need to bother to review any more of her books.  But this was a series I'd been very interested in, and so I took a chance and went ahead and bought a copy to read.  In the end, I feel like this book was definitely better than the others I'd read before, I could see improvements. But it started with some of the same issues I often have with self-published books, and ended with some of those same things.  In a way, I got about halfway through the book and was ready to post a review that would be really good, because I was sucked in and not noticing the things that had bothered me before. But then, towards the end, the final third or so, it changed right back to the issues.  Lots of buts in my review it seems.  So let's add one more. BUT, the banter between characters had a few really good moments.  I loved the swear jar, and I definitely loved having something taking place in my hometown of KC.  I enjoyed the book enough to bump it to a 3.5 stars, although if it had carried through the improvement to the end, I'd have probably given it 4 stars.  I did enjoy it enough that I do want to read book 2, especially since it is set with a Kansas City Royal's baseball player, my really favorite sport and team.

Here is the blurb from Goodreads:
Josh Matthews had a childhood he would rather forget...and he never really knew what it meant to be in a family or to call a place home. His circle of friends are the closest he has come to a family as are his teammates on the Kansas City Chiefs. He is their quarterback and loves playing football. When he sees a fan holding a sign up in the first regular season game, his superstitious teammates tease him that she could be his lucky charm. Dillon Winters knows all to well how being star-struck can hurt you. She got away from her ex-husband and is working hard to take care of her daughter, Lilly. She goes to a football game to drum up business for her bar and meets Josh Matthews, who makes her realize that giving love a second chance can fulfill her life in ways she didn't even know she was missing. 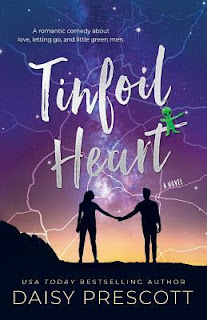 Now, my rating on this is a depends rating.  You see, the author gave us two different endings.  Based on the synopsis below, you might think this is a bit of a science fiction/alien visitor type of story.  And you might be right. Depending on which ending you choose to go with.  Me, I loved the Believer ending, which would make it 5 stars for me.  But if she had just gone with the Skeptic ending, well, then it would have been only 4 stars.  So I compromised with the 4.5 stars finally.  From the minute I picked this one up though, I was hooked.  I wish I'd gone ahead and read it last summer right after I bought it at Book Bonanza, so that I could have stayed up all night reading it on a summer night with no school the next morning.  Instead, I waited, and there you go.  Loved the humor, the story, the angst, the setting of the story, all of it.  There was even one line that just kept me laughing out loud for quite a while after, even as I continued reading:  "The unicorn of orgasms".

And since I got to meet the author at Book Bonanza last summer, I'll share that photo (even as horrible as I look!): 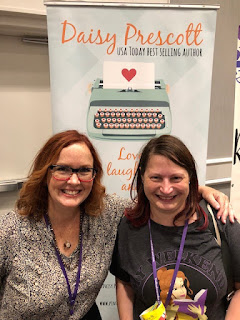 My father was abducted by aliens.
Or so I believed for the last eighteen years.

After my mother's death, I moved to Roswell, capital of all things alien. I’m going to find out the truth and nothing will stop me . . . except Boone Santos.

Compared to the intergalactic tinfoil hat brigade, he's a god amongst mere mortals. Too handsome for his own good (and mine), with a grumpy arrogance, and the most beautiful smile ever—he smashes my plan to pieces like a UFO crashing into the desert.

I need a tinfoil hat for my heart.

Do I believe in aliens? I’m not sure.
What do I believe? I’m not going to fall in love with Boone. Definitely not . . .

All Broke Down (Rusk University #2) by Cora Carmack: 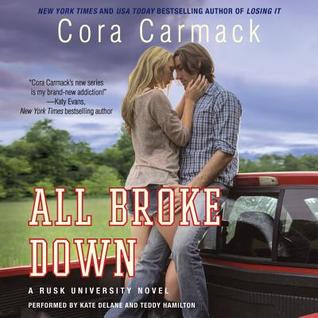 It's been a while since I listened to the first book in this series, but I had purchased this on Audible a while back, and decided I was in the mood to listen to it.  And boy am I glad I did, this one was so good!  One thing that was really funny for me as I listened, was at the beginning when I was getting so annoyed with one character going on and on describing stuff, and then the author totally wove that moment into the story so that her spacing out was annoying or causing issues for another character.  I loved chapter 7, it was extremely hot!  And then there was a lot of back and forth between the characters that fit perfectly for the most part, enough that it didn't even annoy me when it was a usual type of issue you see.  Then something happened at the end to one of the other characters, and I'm guessing that is who one of the next books will be about, and I'll need to read it soon!  Another great book from this author!

Dylan fights for lost causes. Probably because she used to be one.

Environmental issues, civil rights, education—you name it, she's probably been involved in a protest. When her latest cause lands her in jail for a few hours, she meets Silas Moore. He's in for a different kind of fighting. And though he's arrogant and not at all her type, she can't help being fascinated with him.

Yet another lost cause.

Football and trouble are the only things that have ever come naturally to Silas. And it's trouble that lands him in a cell next to do-gooder Dylan. He's met girls like her before—fixers, he calls them, desperate to heal the damage and make him into their ideal boyfriend. But he doesn't think he's broken, and he definitely doesn't need a girlfriend trying to change him. Until, that is, his anger issues and rash decisions threaten the only thing he really cares about, his spot on the Rusk University football team.

Dylan might just be the perfect girl to help.

Because Silas Moore needs some fixing after all. 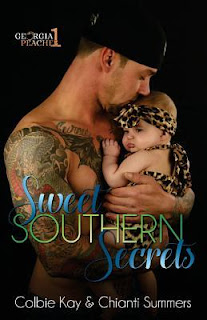 I purchased this one last year when I got to meet the authors at Kinky in Kansas City, a romance author convention that sadly is going to not go on after this coming summer.  The authors of this book were the hosts of this convention.  This awesome convention is where I met Amy Daws for the first time, as well as the cover model Jonny James, just to name a few of the awesome people!  But anyway, I hadn't read these two authors before, so I purchased this book.  Now, normally I'm not the biggest fan of the baby on the cover like this one, that often turns me away. But the synopsis sounded most like what I'd be interested in reading so I bought it.  This book had the same things about it that my friend's book has that I know has to do with self-publishing.  That is where the 3 stars comes in.  It was an okay story, although I guess I didn't read the synopsis that well, because the whole baby plotline was not what I had assumed it was going to be, it went a whole different direction.  I don't know if these are authors I'll read more in the future by or not, but I won't say that I won't.  It would be fun to see where the other Georgia Peaches stories take them.

Here is the blurb from Goodreads:
Dex Mitchell has wanted to play baseball for as long as he can remember. His life was going exactly as it should until a failing grade threatens it all. Dex has no choice, but to go looking for help and where better to look than the quiet girl that sits next to him. If Dex can get her to agree, he might end up needing her for a whole lot more than just tutoring.

Callie Fisher is scared, timid, and being held captive by a night that turned horribly wrong. She's happy being invisible to people around her. Except for the guy that sits next to her. He's always noticed her and now he needs her help. What Callie thinks is supposed to just be a couple lessons in the stars turns into a whole lot of unexpected. Callie never anticipated that agreeing to help Dex would in turn help her also.

These two come together when they need it most, but as the rules change can they still win the game or will secrets give them a loss?
Posted by Lisa Mandina at 7:00 AM