Blog Tour Author Interview with Giveaway: The Isle of Gold by Seven Jane

Praise for THE ISLE OF GOLD

“Part fairytale, part fantasy, part romance, Jane’s debut is full of colorful characters [and] a plot that will thrill the heart of any lover of magic, legends, and epic adventure.” —Booklist

"Jane weaves a tale of myth and magic . . . This tempting novel will entrance." —Publishers Weekly

"A delightful, well researched and evocative historical fantasy that succeeds in bringing a fascinating era to life.” —Midwest Book Review 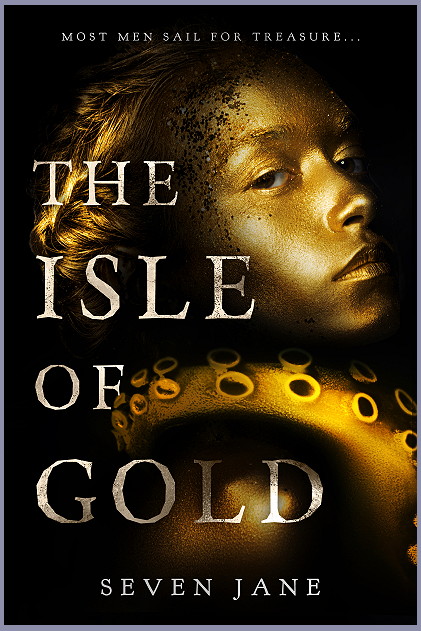 Mystery, Myth and Magic Meet in an Epic Adventure of Two Women Lost at Sea—
and the Secret that Binds Them Together

The year is 1716—the Golden Age of Pirates. An orphan who sleeps in the dusty kitchens of a quayside brothel, Merrin Smith is desperate to unravel the secrets of her past and find the truth about the events that brought her to the Caribbean island of Isla Perla as a child. Disguised as a sailor, and with the help of her longtime friend Claudette, Merrin joins the crew of the pirate ship Riptide, helmed by the notorious Captain Erik Winters. Tenacious and rumored a madman, Winters is known as much for his ruthlessness as for his connection to the enigmatic and beautiful proprietress of the Goodnight Mermaid, Evangeline Dahl, who vanished from Isla Perla two summers before.

At sunset the Riptide sails for the mythical island of Bracile, a place hidden between air and sea and that exists only for a moment every two years, and which has never returned any man who has sailed for its shores. The journey will be perilous and long, and it will take Merrin far away from the only home she’s ever known. Because she can read, Merrin will serve as the Captain’s apprentice, deciphering old texts for clues to the island’s whereabouts as the ship sails through haunted, frozen waters and into the very heart of the ocean. As she struggles to navigate the rough, seafaring life aboard a pirate ship, Merrin must keep her identity hidden from the scrupulous gaze of not only Captain Winters, but also Mister Brandon Dunn, the ship’s surly, legend-spouting quartermaster, and Tom Birch, the charming boatswain Merrin can’t help but feel drawn to.

As the Riptide makes its way to Bracile, Merrin begins to suspect that the men she has worked so hard to deceive may in fact be more connected to her than she would have imagined, and that perhaps her own past might have more to do with the Dunn’s legends and myths than she ever could have guessed.

In The Isle of Gold [Black Spot Books, October 9, 2018] Merrin Smith must face perilous waters, cursed sea goddesses, and the embodiments of some of the ocean’s most terrifying legends as she not only struggles to survive her journey, but to find the answers to the mysteries of her past.

A story where history meets fantasy, The Isle of Gold is an epic, emotional adventure of two women—one desperate to save herself, and the other determined to be rescued—and the secret which binds them together.


1.     What does your writing process look like? Do you know the whole story when you start?  Or do you just start writing and go with it (seat of the pants writing)?  If you plan it out, how do you do that?  Outline, notecards, post-it-notes, etc.?
a.     Since I write primarily historical or mythology-driven fantasy, I tend to do a lot of research and I have a really hard time not wanting to include all the random facts I learn about something. This leads me to be a heavy plotter, but sometimes my characters take over and I find myself letting them lead the story. I use a lot of spreadsheets and have been known to hoard Post-It notes.

2.    Do you edit as you go, or wait till you're finished before you edit?  How many times would you say you go over it yourself before having another set of eyes look it over?
a.     Editing is a daily process for me. I always begin a new writing session with an edit of the previous session. This helps me get into the story, and do a bit of continuous improvement after I’ve had a bit to sit away and come back with a fresh perspective. I always do a full round of edits when I’m done with a project, before turning it over to my trusted beta readers and, eventually, my agent or editor.

3.    Are you part of a writers group that gets together and helps each other with their writing?
a.     Not really a group—I am far too disorganized and antisocial for that. But I do have author friends that I am very close to, and since we’re a bunch of night owls we tend to seek each other out when we’re writing…mostly just so we don’t feel bad about procrastinating. I do stay involved with the Women’s Fiction Writers Association, where I am involved with the back end, and with author/blogger groups online.

4.    Is there a specific pirate or pirate story that inspired you?
a.     Well of course I love Treasure Island, but more modernly I am a huge fan of James L. Nelson’s Brethren Coast series. They’re incredible historical fiction, and James might even be a better researcher than me!

5.    What are your favorite:
a.     Favorite what? Since there was no category, I’ll tell you three favorite local foods from some of my favorite vacation haunts, in case you ever find yourself in any of these places. First, there’s a little coffee shop in Bar Harbor, Maine called The Independent, which sells a blueberry-infused coffee under the label Coffee By Design. Buy it in whole bean. In Calabash, North Carolina, there is a little ice cream shop called Calabash Creamery that hand-makes makes the most incredible ice cream I’ve ever tasted. Try the banana split. Lastly, there’s a gluten-free, vegan bakery in Seattle’s Fremont district, about a block from the statue of the troll under the bridge. Try the cinnamon rolls…and, literally, everything else they’ve got out.


“For as long as men have sailed the ocean, they have told stories about the sea,” says Jane. “It’s a place of mystery, myth, and magic—and this makes The Isle of Gold a perfect setting for an epic adventure that is not only a tale of historical fiction, but of the very evolution of a woman’s spirit as she seeks to find herself in a world of unpredictability and uncertainty.”

“There is an old saying that ‘the cure for anything is saltwater—tears, sweat, or the sea.’ In The Isle of Gold, Merrin’s journey requires all three.”

You can purchase The Isle of Gold at the following Retailers: 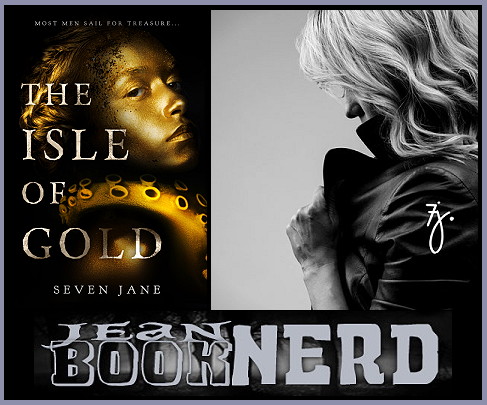 Seven Jane is an author of dark fantasy and speculative fiction. Her debut novel, The Isle of Gold, was published by Black Spot Books in October 2018.

Seven is a member of The Author's Guild and Women's Fiction Writing Association. She writes a weekly column for WFWA's Industry News​ newsletter, and is a regular contributor to The Nerd Daily.

She is represented by Gandolfo Helin and Fountain Literary Management and supported by Smith Publicity.