Still not sure about that title idea.  Oh well.  Right now is about getting reviews done before November and NaNoWriMo starts, so I don't feel like those are hanging over my head and I can get some writing done!  These are all three adult contemporary romances.

King of Code by C.D. Reiss: 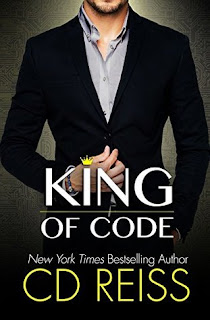 Not exactly sure where to start with this one, as it was different than expected.  I decided to tackle this as the next of my enormous TBR of free e-books because the author is supposed to be at Book Bonanza last year.  I really did like this book a lot.  I'm afraid that my mini-review may not come off that way however. First of all, it was all done from the male viewpoint, and I feel like so many romances are usually done either all from the female point of view, or go back and forth between them, not just the man's story.  So that took me off guard a bit at first.  But in a way that was refreshing and made the story even more interesting to read and kept my attention for that uniqueness.  It was a very dirty, sexy book.  You have to really be okay with that to enjoy it.  I know that there were a few things I didn't like, for example, the noises that it had Harper making. Sure, sure, I know that real noises during sex are weird sounding, there is even a line in the movie Dogma that makes me laugh because of how true it is.  However I kind of feel like in a romance, we can make the noises a little less realistic?  Maybe?  Just me?  Oh well.  Not a biggie.  And then I did feel like it was just one thing after another, piled on top of each other until the tower was ready to fall and upset every little bit they'd built up and created.  Overall a good book, and I look forward to reading more by this author, as well as meeting them next August at BB19.

Here is the blurb from Goodreads:
Taylor Harden is a tech hero on the edge of fame and untold wealth, until a hacker freezes his company and holds it hostage.Harper doesn't want much from Taylor.All he has to do to get his company back is teach her how to please a man. Step by step, and for every step she'll unlock a piece of his system.Kissing unlocks a partition.Touching unlocks another.Using your mouth to…How far is this crazy woman going to go?They hate each other. They can't keep away from each other. They're decoding each other with every step, until all Harper's secrets are revealed, and Taylor risks losing his heart as well as his company. 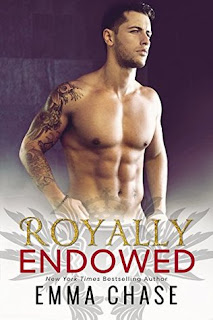 I had owned the paperback of this for awhile, but then decided to try the audiobook.  Unfortunately the male narrator was the same as who does Hardin on the After series audiobooks, I think, and so I had trouble hearing him as this character.  So even though I started listening in April, I didn't get around to picking up the paperback to finish it until September.   Once I did that, though, it was a very quick read.  While it was interesting to see how Ellie and Logan got together finally, their romance a very edgy and drawn out one, probably just a little lacked due to not having any true royalty as a part of them.  But not enough to be truly disappointing or make the story not good.  Logan had a background that was dark and led into so many twisting points in the story.  And it was great to have the two of them with their own types of connections to our other characters from the first two books so that we could still get our fill of the royals.  Good, even if not my favorite of the bunch.  Also, I posted my review of the 4th book earlier this week, had a deadline thanks to a review tour, but if you read that review, you'll understand it didn't matter to read out of order, even though I didn't.

Here is the blurb from Goodreads:
Logan St. James is a smoldering, sexy beast. Sure, he can be a little broody at times—but Ellie Hammond’s willing to overlook that. Because, have you seen him?? Sexy. As. Hell. And Ellie’s perky enough for both of them.For years, she’s had a crush on the intense, gorgeous royal security guard—but she doesn’t think he ever saw her, not really. To Logan, Ellie was just part of the job—a relative of the royal family he’d sworn to protect. Now, at 22 years old and fresh out of college, she’s determined to put aside her X-rated dreams of pat-downs and pillow talk, and find a real life happily ever after. The Queen of Wessco encourages Ellie to follow in her sister’s footsteps and settle down with a prince of her own. Or a duke, a marquis…a viscount would also do nicely. But in the pursuit of a fairy tale ending, Ellie learns that the sweetest crushes can be the hardest to let go.
***
Logan St. James grew up on the wrong side of the tracks, in a family on the wrong side of the law. But these days, he covers his tattoos and scars with a respectable suit. He’s handsome, loyal, brave, skilled with his hands and…other body parts. Any woman would be proud to call him hers. But there’s only one woman he wants. For years he’s watched over her, protected her, held her hair back when she was sick, taught her how to throw a punch, and spot a liar.He dreams of her. Would lay down his life for her. But beautiful Ellie Hammond’s off-limits. Everybody knows the bodyguard rules: Never lose focus, never let them out of your sight, and never, ever fall in love. 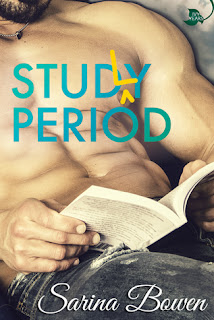 So, I started reading this as part of the author's newsletter.  I rarely convince myself to do that, but something about this one got me interested enough to read it.  It was my first story by this author, but I'm now sure it will not be my last.  I guess maybe it was originally published back in March in the newsletter, but I just signed up recently and she must have decided to share it again.  I'm glad that she did.  It could possibly be that it was a hockey player in the book, and I'd just attended my first hockey game ever right about the time I found it.  It was a great story, and then there was even one day that it had such a major cliffhanger I was immediately joining the author's Facebook fan group to tell her how much I was hanging on it and she was killing me!  LOL.  A cute fun short story.  Sounds like as series I'll have to look into soon!  Now, if it sounds like one you want to read, I believe you can click the link on the Goodreads info page, or maybe sign up for her newsletter yourself.

Here is the blurb from Goodreads:
There are 1016 people in the freshman class at Harkness College. I can’t be the only socially awkward nerd girl virgin among them. Right?
It’s time I learn to talk to guys without blushing and stammering. So I take a confidence-building job at the student tutoring center. Twelve bucks an hour, plus human interaction. What could go wrong?
A fun-loving French Canadian hockey hunk, that’s what.
When Pepe Gerault sits down at my tutoring table, my brain shuts off and my mouth goes right into hyperdrive. Even the sound of my name on his lips—Josephine—gives me a mini orgasm.
I want to hand him my V-card. But all I manage to hand him is…my thesaurus. And my dignity. All seems lost, until I hatch a plan to get him alone…
Posted by Lisa Mandina at 6:30 AM