The first two months of summer have flown by, and as expected, my amount of reading time has totally decreased from this summer, although if you remember what I posted in my July wrap-up, I didn't get as much reading done as I wanted this summer either.  I'm so far behind on my ARCs from ALA, as well as some that some publishers sent me unsolicited, but that I did want to try to read.  August was too busy for a wrap-up post really, and while September has been busy as well, since I am not quite finished with the series I need to review, and was told I mainly needed to post those reviews on Amazon and Goodreads and  Barnes and Noble more than my blog, I thought I'd go ahead and do a wrap-up post for today, and then share each of those books individually on other sites, and then one big review post for all three here when I'm done with the 2nd and 3rd.

Just this last week of September I have had some really exciting times, meeting some authors and also a favorite reality tv celebrity.  This past Tuesday the first Wahlburgers restaurant in our area opened up, and I took the day off work to go wait in line and eat there.  My hope was to meet Donnie Wahlberg from NKOTB, and his brother Paul, the chef, who I've gotten to know from watching the Wahlburgers reality tv show.  No Donnie, but Paul was there, and I got a selfie with him! 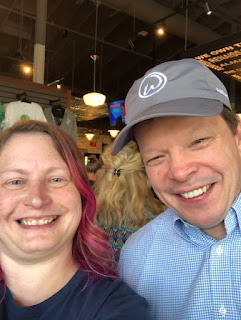 And the food was just as good as I remembered from when I got to eat at the Wahlburgers in Orlando back in 2017.  Just look at this picture, it's Donnie's choice of the BBQ Bacon cheeseburger with no avocado spread or jalapenos.  And then I got the onion strings this time instead of the sweet potato tater tots.  I also had their "adult" cherry cola, which was made with Mexican coca cola, and as you can see, they brought the soda left in the bottle out for you to add if you wanted or drink the rest of. 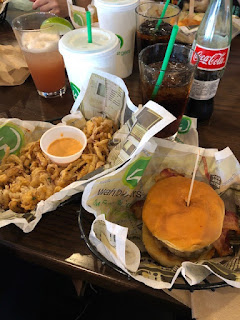 Then, we had Juliana Zobrist, wife of former KC Royals baseball player Ben Zobrist, at the bookstore where I work on Thursday night, promoting her new book, Pull it Off.  She was so nice and sweet, and so I had to buy a book and get it autographed, and also get my picture with her. 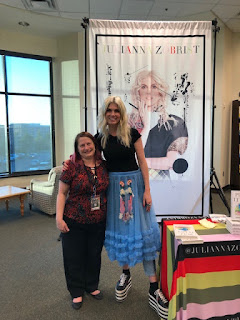 The most exciting event of this past week though, or at least tied with the Wahlburgers opening, was an author panel we held at my bookstore on Saturday.  There were 5 awesome YA authors there, and I got to be the moderator for the panel!  Of course they were all books I wanted to read, and one of the authors I already have met and read and love her books!  First here is a shot of me with all the authors:  Miranda Asebedo, Sarah Henning, Natalie C. Parker, Megan Bannen, and Tessa Gratton. 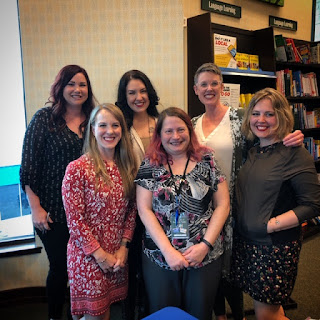 Okay, then I got my books signed and got a picture with each individual author.  Starting with Megan Bannen, author of The Bird and the Blade.  I haven't read it yet, although have had it sitting in my house for over a month now.  It's such a small world because she is neighbors with my co-librarian, and also will be coming to speak at my school in December! 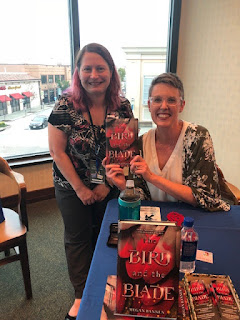 Next was Miranda Asebedo, author of The Deepest Roots.  Now I already had an ARC of her book, but didn't get to it before the panel.  See reasons in top paragraph.  But I love that her book is set in Kansas, and from what she said, her next book will be set there as well.  While I'm officially from and live in Missouri, we are right on the border of Kansas, and I work in Kansas, and my stepdad is from Kansas, so I have family there, and I count it as kind of my home state part two.  I also had a chance to talk to her husband and her daughters while the other attendees were meeting the authors, and it was great to hear about the life of an author, especially a debut author, who used to be a teacher! 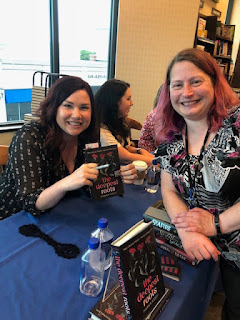 The author in the middle of the row was another new to me author, Natalie C. Parker, author of Seafire.  Another book I've been excited to read, but had to buy a copy to get signed.  I didn't realize she was married to Tessa Gratton, but that was definitely fun to have a married couple as part of the panel.  She was really nice, and I look forward to reading her book! 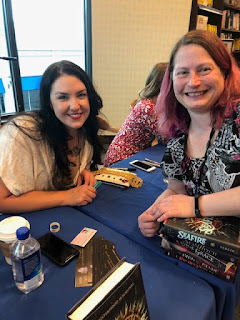 The fourth author on the panel was Sarah Henning, who wrote Sea Witch.  If you've followed me for a while, you know that I love fairy tale retellings, and a lot of the time I do love it when they take the viewpoint of the villain to make us feel for them as a person, not just an evil entity.  Once again I didn't have a copy to read beforehand, but I now own a copy and can't wait to read it.  I have to share one of Sarah's answers to the question about what she finds the most difficult about writing along with what she finds the most rewarding part of writing.  She compared it to a wedding cake.  Your first draft is a beautiful wedding cake, and then you give it to the editor and other readers and they make it so you have to smash it into pieces, and then you have to take that smashed up cake and fix it into an even prettier wedding cake with more frosting and fondant.  One of my favorite stories during the panel, surely nothing to do with how much I love wedding cake.  Also, she started her writing on her phone, while riding a stationary bike.  Wow! (Never mind the photo bombing by Tessa Gratton in the picture!) 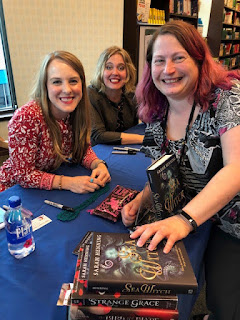 And thanks to that lovely photo-bomb above, you can probably guess that the final author on the panel that I got to talk to was Tessa Gratton.  I've been a big fan of hers since she first came to KC, back in 2011 I think, with Maggie Stiefvater and Brenna Yovanoff.  I even invited her to come speak to the Young Writers group at my school a couple years ago when I found out she lived in Kansas.  Of course now I know that all of these wonderful women live in Kansas, so I may reach out to more of them!  Here I am with Tessa in the picture below.  I felt like I had to promise her that I wasn't stalking her, since I did invite her to my school a few years ago, then see her at ALA this summer. 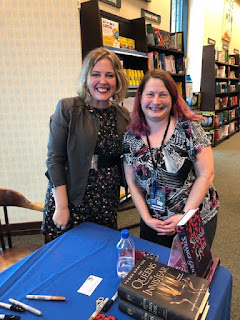 So much awesomeness in this past week!


Alright, let's get some stats! 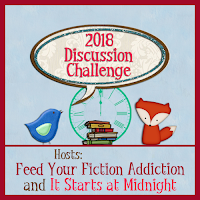 My goal was 4 for the year, and I got one more done this month, Don't Judge a Book By Its Cover, or a Narrator by Their Voice.  So, halfway done for the year.  Two more posts in 3 months, I can do it, right? 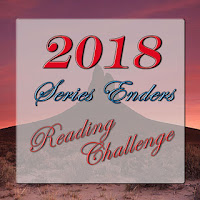 My goal for this was 6, and I finished back in July, when I got up to a total of 8.  I did have two more, one in August, and one in September: 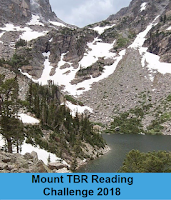 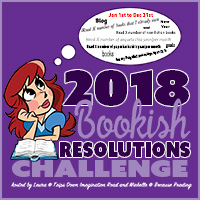 1.  Still working on editing my short story.  I have decided on what I think my NaNoWriMo idea will be this year.  I need to do some outlining though.  I might be going to an editing conference put on by Carina Press at the end of October, it all depends on if I can get someone to watch my dogs that weekend.

2.  Goal 2 was reading books that my friends recommended.  I brought home the graphic novels my friend suggested I read to decide if I liked DC or Marvel actual comics better, without taking into account the movies.  I started the Captain America one.  Kinda bored by it.  Haven't finished.

3.  Still working on the cutting back of blog tours.  I have started getting those ARCs posted on my calendar which does help keep me from signing up for tours.  But it doesn't necessarily mean I'm getting all those ARCs finished like I plan.  Now, this final thought leads into a quick one month challenge I signed up for in August:

Echoes by Alice Reeds and Bruja Born (Brooklyn Brujas #2) by Zoraida Cordova both HERE.
A Touch of Gold by Annie Sullivan
The Dark Beneath the Ice by Amelinda Bérubé
That's Not What Happened by Kody Keplinger
Kiss Me in Paris by Catherine Rider

Okay, other things going on in my life right now include that I'm selling my house.  I'm going to continue living here and renting it for about a year. Then I'll be ready to start looking for a new house so that I can move. And I'll have the money from selling my house sitting in the bank ready to put down.  I'm getting even more stressed about my part time job. As much as I love the bookstore, the number of people they have working has decreased to where I am sometimes the only person working our two floor store for customer service.  We have a cashier, and someone in cafe, as well as a manager.  But it's not enough.  I wish I could afford to quit, but I'll be hanging on for a while longer.

I mentioned about the construction at school.  Let's just say it was NOT all completed by the time school started and they are still working on it.  The circulation desk we were supposed to get replaced is still there.  They might get the new one out to us in October, but most likely not until December.  Things are a little crazy at school, with a new superintendent, and other changes going on, it seems like things are just constantly changing.  Oh well, I still love being a librarian, and my school is still an awesome school.

I'm looking forward to finally getting fall weather, tired of the summer heat.  Although it seems the first week of October is going back to the 80 degree temps.  Boo.

So, how was your September?  Are you a fan of fall weather, if you live in a part of the world that is going into that season?