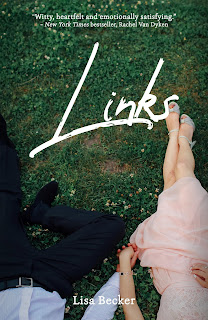 Just re-released is Lisa Becker's second chance romance, Links, which New York Times bestselling author Rachel Van Dyken called "Witty, heartfelt and emotionally satisfying."
In high school, Charlotte Windham went through a typical ugly duckling phase - glasses and all, while harboring a crush on Garrett Stephens, the school's athletic heartthrob. Fifteen years later, Charlotte and Garrett have a chance encounter at a Los Angeles restaurant. However, this time around, Charlotte has leveled the playing field. She’s a bestselling novelist and no longer “Glasses,” the humiliating nickname Garrett gave her. She’s a catch and, thanks to corrective eye surgery, it’s not just her eyes that see better…so does her heart! Garrett hasn’t fared poorly either, transforming from teen heartbreaker to adult lothario and is now a successful professional golfer suffering from a possible career-ending injury. Can Charlotte forgive Garrett for his past ways, and more recent Don Juan lifestyle?  And, can Garrett change his ways for a second chance with Charlotte, who may just be perfect for him?
Find Links exclusively on Amazon: https://www.amazon.com/dp/B07HCSF7G9

My Review:
My rating:  4 stars
I am finding that I really do like books that we get both of the main characters' viewpoints, chapter by chapter, and this fits into that perfectly.  We get both Charlotte and Garrett's thoughts in basically alternating chapters.  Because of this, it makes you a little irritated with Charlotte at being so hesitant.  Although I understand her trepidation, having been in the same types of situations as a nerdy high school girl with crushes on the cute, popular guys.  But you're definitely rooting for Garrett, as he has become a pretty good guy, even to the point of realizing what he did when he was younger was stupid, or at least he knew it was part of being a stupid teenage male.  The grown up Garrett is all about doing what he can to convince Charlotte he is a good guy and truly interested in her, by getting to be friends with her first.  But even when he can tell that the two of them are definitely starting to feel as if they are more than friends, he has to fight to get her to see him that way.  While you can see how she might get the right idea with the last little hang-up at the end, I felt that she definitely overreacted, especially after getting to know Garrett as well as she did, and after how he'd told her how he felt about her and wanted more than friendship.

Overall it was a very sweet and easy summer read.  It had a little bit of sex, but not a ton.  It really got into a lot of situations, and I feel like Charlotte was pretty realistic in how she handled it all.  I loved when she got to get back at a college frenemy, as well as Chapter 48, and the very last chapter.  If you're looking for a perfect summer read, this is one you should pick up.

If you want to check out the original post, which includes and interview with the author, you can go HERE.