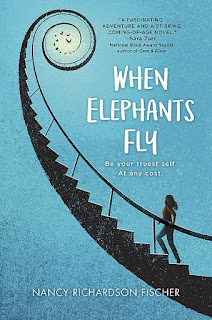 There are some battles worth fighting even if it means losing yourself.

T. Lily Decker is a high school senior with a twelve-year plan: avoid stress, drugs, alcohol and boyfriends, and take regular psych quizzes administered by her best friend, Sawyer, to make sure she's not developing schizophrenia.Genetics are not on Lily's side.

When she was seven, her mother, who had paranoid schizophrenia, tried to kill her. And a secret has revealed that Lily's odds are even worse than she thought. Still, there's a chance to avoid triggering the mental health condition, if Lily can live a careful life from ages eighteen to thirty, when schizophrenia most commonly manifests.

But when a newspaper internship results in Lily witnessing a mother elephant try to kill her three-week-old calf, Swifty, Lily can't abandon the story or the calf. With Swifty in danger of dying from grief, Lily must choose whether to risk everything, including her sanity and a first love, on a desperate road trip to save the calf's life, perhaps finding her own version of freedom along the way.

Praise for WHEN ELEPHANTS FLY"Nancy Richardson Fischer has managed to combine so many important topics-family, mental illness, extinction, animal welfare, and adolescence-into an accessible, moving and extraordinary story." ―Ellen C. O'Connell, Executive Vice President, Global, Space for Giants"This book was an absolute pleasure to read. I encourage everyone to read this inspirational book and discuss mental illness and tolerance and the need to improve wildlife protection." ―Katie Rowe, Pritzker Genius Award nominee, Co-founder Reteti Elephant Sanctuary"This moving coming-of-age adventure story is a captivating page-turner that crescendos to a valiant and surprisingly delightful conclusion filled with hope for both humans and elephants." ―Patricia Sims, Filmmaker, When Elephants Were Young. Founder, World Elephant Day"When Elephants Fly is a compelling read, beautifully threading the complex relationship between mothers and daughters, mental illness and elephants." ―National Book Award finalist Carrie Arcos"Not only does this book show the reader the perils of keeping elephants in zoos and having them perform in circuses, it does it with heart, grace, and imagination." ―Nina Berry, author of The Notorious Pagan Jones and the Otherkinseries"Unlike anything I've read before in YA, When Elephants Fly is both a fascinating adventure and a stirring coming-of-age novel. There are few clear heroes or villains, and no easy answers for Lily as she moves into an uncertain future. The bond between elephant and girl is deftly wrought-reminiscent of Alec and the Black in Walter Farley's classic, The Black Stallion, but for an older, contemporary audience." ―Sara Zarr, author of Gem & Dixie

My Review:
I started out this one a little unsure how I would feel about it, but by the end of the book I was so glad I was able to just sit and read with no interruptions, because this was such a page-turner.  There were so many different aspects to this story.  So many things that tugged at my heart.  Not only the big things talked about in the synopsis, the fact that Lily is worried about schizophrenia taking over her life and the baby elephant, Swift Jones - or Swifty, whose mom has rejected her, but also Lily's best friend Sawyer who has a family that does not support him, even going so far as to forcing him to move out.  And then there is the circus that takes ownership of the Swifty, and while there are the issues that you'd imagine with a circus and animals, there are even more things going on behind the scenes and between the family members that run it.  Not to mention that Lily finds out things about her dad and mom's relationship, and comes to realize just why her father was doing the things he was the way he did after her mom was gone.

I learned a lot about elephants, and a lot about schizophrenia as well.  I knew that schizophrenia was a complicated and oftentimes scary mental illness, but didn't realize all the types there were, and just all the ways it could manifest.  I also didn't know how much it could be overcome in some cases, and that it wasn't a set cure of just taking medicine and being okay.

It was actually a little nice bit of a break to get a girl that was as innocent as Lily was, boyfriend-wise, sexually, etc., and to get a story that fit that type of a teenager perfectly.  I feel like I'd been pretty close to that aspect in my teen years.  So I enjoyed the way that was done in the book.  By the end I was just so into the story I couldn't put it down, and finished it really quickly, hoping that they'd be able to save Swifty, and that other things would resolve themselves as well. 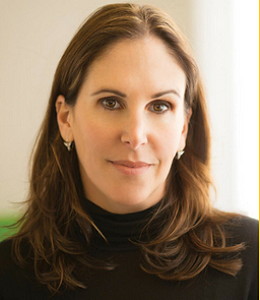 I was born on the east coast and went to Cornell University. After college I worked as a writer for Ringling Bros. Barnum and Bailey Circus. It was a fun first job and I learned how to write quickly, and also that when elephants sneeze on you it's very (VERY) messy. After a year in the circus, I moved out west. I lived in Aspen, Colorado where I skied as much as possible and worked as a waitress in a Mexican restaurant. Great experience but I learned that waitressing is hard (HARD) and I'm not very good at it.

After Aspen, I moved to San Francisco, California where I worked as a writer for University of California, San Francisco and wrote freelance for LucasFilm. At UCSF I learned that sitting in a cubicle under fluorescent lights dulls my soul. LucasFilm taught me that writing freelance, especially fiction, is fun (FUN). So I headed to graduate school in Boulder, Colorado to further hone my skills.

For the first part of my freelance writing career I wrote sport autobiographies. I'd visit and travel with an athlete like Monica Seles, Bela Karolyi, Nadia Comaneci or Apolo Ohno and then write their book. It was a terrific job, but after ten years and tons of incredible experiences I got tired of writing other peoples' stories and not my own.

Today I live in the Pacific Northwest with my amazing husband, Henry, and our mostly loveable (but sometimes vorpal) Vizsla, Boone. When I'm not conjuring a story, I love to kite-board, bike, ski or plan adventures with Boone and Henry, who both make me laugh for different reasons and who are the best partners in fun a gal could ever imagine. 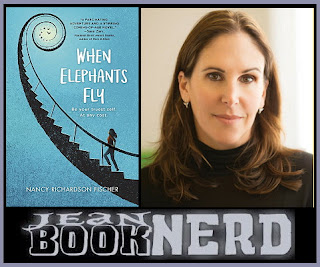 -  3 Winners will receive a Copy of WHEN ELEPHANTS FLY by Nancy Ricgardson Fischer.
ENDS: OCTOBER 8, 2018

Check out the rest of the tour HERE.
Posted by Lisa Mandina at 7:01 AM