Rhys Wyatt is as arrogant as he is beautiful, and Ivy Bishop has been infatuated with him forever. The night Ivy makes her move, it ends horribly, leaving her utterly heartbroken.

Three years later, Ivy is dating Blaine Wyatt; Rhys’s loving and tender younger brother. With Rhys and their past somewhat out of her mind, everything about her relationship with Blaine seems perfect. But when Blaine leaves Ivy alone all summer; neither of them anticipated Rhys to return, or him and Ivy to be stuck living under the same roof…

Rhys never believed Ivy would be all grown up and everything he’s ever wanted – gorgeous, perfectly alluring, and an infuriatingly tempting beauty he has to keep his hands off of. But the more they try to resist each other, the more intense their urges become, until one night changes everything, and Wyatt brothers will never be the same.

EXCERPT:
IVY
I pushed open the front door, tossed my keys onto the entryway table and flicked on a light switch.

I let out a shrill scream and whipped around, even though I immediately recognized his smooth deep voice. Rhys sat on a bench along the opposite wall leaning back, legs apart and spread, with his muscular arms crossed in front of his chest. My green eyes locked with his blue ones, but his bare chest had my gaze slowly creeping below his neckline. My eyes travelled downwards to see tattooed forearms, a pair of gray sweat pants hanging loosely around his hips, and finally his bare feet.

I pressed my palms down on the table behind me to keep from melting to the floor. “What the hell are you still doing here?” I sputtered.

An amused grin curled on his lips, but he didn’t budge as if he were inviting me to straddle his open legs. “Where were you?” he repeated.

“Why are you sitting here in the dark?” I shot back, even though my voice was shaky.

“Do you always answer a question with a question?” He stroked the five o’clock shadow grown in around his lips with his thumb and index finger.  He slouched down further on the bench like he was getting comfy.

“No, not always.” I said, finally able to gain my composure.

“Come on Ivy, don’t make me ask you again.” His smug smile made want to whip off one of Missy’s cowboy boots I was wearing and chuck it at him.

He slowly uncrossed his arms and pressed his palms flat against the bench beneath him on either side of long muscular legs. He leaned forward and tilted his head to the side with a cocky grin. “Your shift must have ended at least three hours ago.”

I just stood still welling up with irritation. What the hell was he still doing here? He bit down on his bottom lip and tucked his shoulder length hair behind his ears. Even though he looked scruffy and older, he still had the same boyish good looks I remembered falling in love with. His new appearance suited him better than his once clean-shaven face hidden under a baseball cap.

“It’s none of your business.” I pulled off my boots in case I really did need them for ammo.

“When my brother’s girlfriend gets dropped off by Charlie three hours after her shift ended, I think it’s more than my business. Especially when she stumbles in wearing the world’s shortest skirt.” Rhys’s gaze trailed up my legs as he rose to his feet. He was much taller than I remembered, and I had to tilt my chin upwards to meet his stare.

“I was at an employee bonfire behind the bunkhouse. I wanted to leave, so Charlie offered to drive me to the ranch. If I would’ve known you were still here, I would’ve rather slept in a dumpster than be graced with your presence.” I spun around to separate myself from his intense stare and headed off in the direction of the guest bedroom.

Who the hell did Rhys Wyatt think he was talking to me like that?

Rhys’s hand closed around my elbow, and my body trembled at his touch. I wasn’t expecting every tiny hair to stand on edge when his warm fingers melted into my skin but they did.

“No one knows I’m back in Moose Creek, and I’d like to keep it that way… for now.” Rhys’s voice lowered to a murmur. He gently tugged my backside against his hard groin and whispered in my ear. “Trust me. I don’t want to be here anymore than I want your little body floating around and bumping into me every which way I turn. When you walked in on me last night -” He stopped from continuing his sentence and paused. He let out a warm tense breath and growled against my ear. “This situation isn’t ideal for either of us. So keep your distance and don’t you dare tell anyone I’m back.”

I sucked a sharp breath. It felt like my knees were about to buckle. How could I let my body react to him like this?

“What are you hiding from?” I asked through clenched teeth.

Rhys released my elbow from his death grip. “I’m not hiding.”

I slowly turned around and watched his smooth muscular back arch as he ran both his hands through his brown hair. His chest was so defined that I wanted to reach out and trace my fingers around his prefect pecks. His eyes fell closed and he let out an angry noise from his throat.

“I’m not leaving, Ivy. I’m staying in Moose Creek for the summer and I’m living at the ranch. I’d really appreciate you keeping my presence to yourself right now. That means not telling Blaine either. I don’t need anyone asking questions, especially not Blaine.”  When his eyes finally opened they softened. Rhys slowly moved his bare feet across the hardwood floors and I stood frozen in place, mesmerized by his tight body stalking in my direction. He stopped inches in front of me and ran a hand through his thick dark hair. “Do you understand?” he asked.

I stood speechless for a moment until he lifted his eyes to meet mine. I expected them to be filled with a proud and pompous smile, but there was something vulnerable in them that I had never seen in him before. His chest rose up and down and his lips stayed slightly parted.

“Goodnight Ivy,” he whispered and disappeared down the hallway. 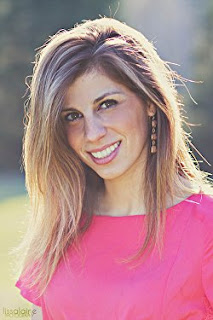 Amanda Cowen can be found eating cupcakes, singing off-key, or watching a good RomCom when she isn't trapped on her computer writing stories. She is an "It's Always Sunny in Philadelphia" fanatic, a hater of roller-coasters and a country music junkie. She lives in Thunder Bay, ON where the summers are short and the winters are long.
Amanda would love to hear from her readers. Become a fan on Facebook, follow her on Instagram @authoramandacowen, or follow her on Goodreads.