Book Blitz with Giveaway: Not Her Gargoyle by Annie Nicholas

Ruby is done with jerks, dead-end jobs, and eviction notices. Everyone else she knows is finding ways out of this crappy neighborhood, so why can’t she? Since opportunities refuse to fall from the sky, Ruby makes her own. To hell with the little voice in her heart whispering about love. She never met a man she wanted to keep…then she met a gargoyle. Men were boring after all.

Nick was a con, a thief, and a rogue. He couldn’t keep a dime in his pocket even if it was glued. Then he met a ruby. Not one from the earth but one of flesh and blood. And ass. Let’s not forget the ass. Stealing her heart was now all he wanted.

He has a plan that could make both their dreams come true. It only involves an itsy-bitsy risk. All they must do is rob a witch.

Oh, and avoid the dragons.

Grab your copy for only 99¢ during release week only!

EXCERPT:
A distant dragon roar made Nick miss a wing beat. He swirled out of control for a second and caught his balance. One of them was close and he bet it was Eoin. Masquerading as a human would help Nick avoid recapture. He increased his speed, heading back to the apartment.

Landing on Ruby’s fire escape, he found the window cracked open for him. He smiled at the small gesture of kindness. She was one of the sweetest women. He recalled how fiercely she’d protected her sister from the vampire and himself when they had invaded the apartment. That felt like forever ago. She had been ready to fight them both. Brave and beautiful and kind.

Once more he wondered why she didn’t have a mate.

Nick climbed inside and found her on the couch, feet propped on the coffee table as she watched the evening news. Three empty bottles of beer sat next to the couch.

She gave him a huge grin and waved him over. “Come sit with me.”

The couch seemed too small for the two of them so he sat on the floor in front of her instead, leaning his back against it.

“Look.” She pointed to the television. “More gargoyles.”

His brothers were on the evening news, flying over the city’s port. “Yeah, I know them.” The dragon would hear about this if he wasn’t already watching. Nick hoped his brothers would lie quiet for a few days so Eoin wouldn’t blast them from the skies.

Ruby draped herself over his shoulders and handed him a beer, rubbing her face on his skin. “You’re very warm.” She snuggled closer between his wings, her arms lazily circling his neck from behind. “Can you shoot flames like the dragons?”

He snorted and took a sip of beer. “No. Are you drunk?” He eyed the bottles. There were only three. Then again, she was much smaller than a gargoyle. Maybe three was all it took.

“Nah, but I’m feeling good.” She sighed and seemed to melt against him. “I had an awful day.”

He reached behind and scratched her scalp with the tips of his claws like he would any family member in distress. He knew from experience that it felt good. He’d had a bad day too. Touching her made him feel better.

She moaned in his ear and it sent shivers down his spine. She bent over his shoulder more, giving him better access to her head. “That feels great.”

He undid the pins holding her hair and allowed it to cascade over his chest before continuing to massage her scalp. “What happened?” She felt so soft and tiny. Delicate like an angel. A brief whiff of her sweet smell and he struggled with the urge to bury his nose into her hair.

“What do you mean?” Her voice was muffled against his skin. Sleepy.

“Why was today so awful?”

“My boss sold the diner. I might be unemployed soon and my landlord is pressuring for rent.”

Nick finished his beer, absentmindedly scratching Ruby’s head. Stalking her boss until he changed his mind on selling the diner would probably end up with the police being called. Killing him was not Nick’s style. “Who’s the new owner?” He moved his hands to her shoulders and gently massaged the knots. Maybe they could be convinced to keep Ruby as an employee.

“The right side is worse than the left. Oh God, right there. Don’t stop.”

Those breathless pleas made him shudder. His wings reflexively expanded. She was setting off instinctual triggers. He breathed through the strong urge to carry her away somewhere dark and secluded. Teach her a thing or two about gargoyle anatomy. The desire to show her exactly how good he was at making women scream grew. The good kind of scream. Not the bad kind. Well, he could make them do that, too.

“I don’t know about the diner. I imagine I’ll meet them soon. My boss says that my job is secure—”

“That’s good news.” He ran long strands of red hair under his nose. Closing his eyes, he inhaled deeply. So, he didn’t have to beat anyone.

“It is, but it’s also a lie. I’ve been through this before. The shifters are trying to clean up this area. They are building shifter oriented neighborhoods close to here and investors are gobbling up every available building.”

“They are planning to make this neighborhood nicer?” That meant safer. Shifters were territorial and the majority responsible citizens. Any criminals in the area would be smart to move. He scratched his chin. Most shifters didn’t care for his kind.

“Nicer means more expensive. It means my landlord can increase the rent, which means I’m going to have to move just like everyone else.”

This wasn’t the Ruby he remembered. She seemed deflated draped over his body in defeat. “But you could find a better job at one of these new businesses.”

“That’s if I can find a job. The last place I worked was a biker bar. The new owners renovated the place, it became an after-work lounge for hipsters. Then I was fired because I didn’t fit their expectations as a bartender.” 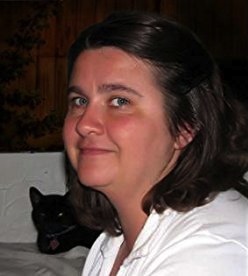 Annie Nicholas writes paranormal romance with a twist. She has courted vampires, hunted with shifters, and slain a dragon's ego all with the might of her pen. Riding the wind of her imagination, she travels beyond the restraints of reality and shares them with anyone wanting to read her stories. Mother, daughter, and wife are some of the other hats she wears while hiking through the hills and dales of her adopted state of Vermont.