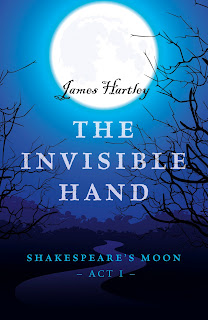 
The Invisible Hand is about a boy, Sam, who has just started life at a boarding school and finds himself able to travel back in time to medieval Scotland. There he meets a girl, Leana, who can travel to the future, and the two of them become wrapped up in events in Macbeth, the Shakespeare play, and in the daily life of the school. The book is the first part of a series called Shakespeare´s Moon. Each book is set in the same boarding school but focuses on a different Shakespeare play.


1.     What does your writing process look like? Do you know the whole story when you start?  Or do you just start writing and go with it (seat of the pants writing)?  If you plan it out, how do you do that?  Outline, notecards, post-it-notes, etc.?

It´s a bit of a mix, to be honest. I only really start when I have a clear idea of how the book starts but although I plan and think I know how the book´s going to end, I´m flexible. If I come up with a better idea for the end as I write, I change it. Sometimes things you think are going to work very well don´t and I like to adapt. For me, if I am too rigid and plan everything out before I even start writing I get bored – that´s when I start to count words and it turns into a job. I like telling myself the story the first time I write and one of the key parts of enjoying a story is not quite knowing what will happen next – I try to keep that in mind when I write.
I don´t use post-its or any set method but, like every writer, I think, I write and find notes everywhere in the house (most indecipherable). I also walk around supermarkets and streets mouthing, “Ah! He says that and she goes there…” like a madman.

3.     How long have you been writing?  What tips do you have for aspiring writers?

Since I was about five or six, I think. I would say, keep going, especially if you get decent feedback from teachers, family or strangers who read things you write. Read a lot, don´t be jealous of other writers, enjoy writing, take rejection on the chin and listen to criticism. If you´re thinking of making a career of it, have a Plan B just to keep you ticking over.

4.     What time period would you like to visit if time travel was possible like in your story?  If you had to be dropped into the events of any of Shakespeare's plays, which would you choose?

For me, prehistory. Around the time the Neanderthals were dying out – or being wiped out – by homo sapiens. When humans lived in caves and culture was developing. I think it would have been an amazing time, a fascinating thing to see – especially life in the caves, the early human religions and societies.
As for Shakespeare´s plays, probably Macbeth, as in The Invisible Hand. I love all the gothic stuff: the dark moors and castles and witches and prophecies. I put wreckers in The Invisible Hand, too, people who used to lure boats into land in storms and then run down to the beach to steal from the wrecks. So, yep, Macbeth, if there was one play.

5.  What are your favourite:

Books/authors/genres - Most of my favourite authors are dead. Living writers I like are Donna Tartt and Michel Faber. I love non-fiction, history, rock music, art and science. In fiction, I´ll read anything and everything – I don´t read one particular genre and I can´t read the same type of book again and again.

Movies/TV Shows – I don’t want TV, really, only sport. I have two young kids and they monopolise it. I love movies, pretty much anything.

Music – again, anything, but mostly rock n roll, pop, blues, metal, things like that. I like a bit of classical, grime, flamenco, hip-hop too. I´m from Liverpool so the Beatles are pretty much in my blood. I really think no-one´s bettered them yet.

Food/Writing snack – No food when writing. Maybe tea or water. Just write, do the writing, then eat!