Blog Tour with Author Interview and Giveaway: Sneaking Out (Chased #1) by Chuck Vance

Could you sleep next to a murderer?

Luke Chase—yes, that Luke Chase, a modern hero ripped from the headlines—didn’t mean to get caught up in Mrs. Heckler’s murder. He just wanted to hook up with the hot new British girl at St. Benedict’s, and if that meant sneaking out to the woods after hours, then so be it. But little did he know someone would end up dead right next to their rendezvous spot, and his best friend and roommate Oscar Weymouth would go down for it. With suspects aplenty and a past that’s anything but innocent, Luke Chase reluctantly calls on his famous survival skills to find the true killer.

For fans of “A Study in Charlotte” and boarding school lit, “Sneaking Out” (book one in the “Chased” series) immerses readers in the privileged prep school world, with a mystery that exposes the dark side of life on a residential high school campus.

Luke stood up and held out a hand to help Pippa up. He didn’t let go after she rose, and he clasped it firmly as they walked together. It didn’t feel awkward—he’d already held her hand a couple of times. He felt protective. They walked along in silence.

They passed a mailbox, its hinge squeaking in the wind. The wind had picked up a plastic bag, which was scraping along the road, dancing with the fallen leaves. Every noise was amplified.

Luke pulled Pippa toward him to avoid a ditch. It was then that Luke sensed something. He glanced over his shoulder, and saw the flash of someone jump behind a tree. Luke’s muscles tensed. They were being followed.

“Don’t turn around, but someone is behind us,” warned Luke. “On foot.”

He saw Pippa’s neck stiffen. “Who is it?” she whispered.

They started walking as fast as possible without running. Luke felt as if there was a bullseye on his back. Was the person who was following them crazy enough to do something to harm them? What if he had a gun?

They were about a block away from the nearest streetlight. Luke feared that if they walked under it, they would be completely exposed to whoever was following them. It seemed safer to remain in the shadows. He abruptly pulled Pippa diagonally across the street. They picked up their pace and stayed on course.

“We’ll be able to see who it is when they pass the streetlight,” said Luke.

“Do you think he crossed, too?”

Luke pricked his ears. He could hear a distant tap, tap. Footsteps. “No, he’s on the other side.”

They walked past the streetlight and up about thirty feet before stopping short and turning around. For a split second, they saw a figure bathed in the light, but then it darted to the side. It looked like a man, in a baseball hat. But he was too fast for them. Luke grabbed Pippa’s hand tightly.”


1.   What does your writing process look like? Do you know the whole story when you start?  Or do you just start writing and go with it (seat of the pants writing)?  If you plan it out, how do you do that?  Outline, notecards, post-it-notes, etc.?  Are you part of a writers group that gets together and helps each other with their writing?

In my fantasy life, I am very organized and use notecards and outline. I have almost finished Sue Grafton’s alphabet series (I’m on X.) and every time I read about her detective Kinsey Milhone’s process I am jealous. She is meticulous and writes notecards and files and puts everything on her bulletin board. I am terrible at systems and follow through so that would last about a day for me. It’s really all in my head. I do keep track of what happens in each chapter so that I can go back and make sure the pace is working. The majority of the time when I write I know who the murderer is, but sometimes when I write a book I switch it at the end. It’s usually works out that the clues I had established all along were leading to someone else.

2.    How do you come up with your ideas for your stories?

It varies. I went to boarding school in Connecticut so I wanted to set a book there because I think it is a weird backdrop. It’s strange how students live with their teachers and the teachers are also very young usually and still sometimes act like students. Also, you really get insight into your teachers’ families because they are in your dorm and there is a familiarity in the co-existence. But I like the idea that you never really know what goes on behind closed doors. And I love mysteries and murder, so what better to transpire at a boarding school! In terms of plotting, I usually hear something about a real life murder and then put my own twist on it to make it fiction.

I have been writing since I was a kid. I always had a notebook that I wrote stories and poetry in. I can’t remember a moment when I wasn’t writing. I am so glad that computers exist because it makes editing much easier. I currently have creepy handwriting because I never use it anymore.

4.     What tips do you have for aspiring writers?

The most important part about writing is the actual writing. You just have to sit down and do it. You have to be disciplined and yet you can’t let the discipline constrain you. What I mean is, you can’t say, I only can write in this room at this time when the house is this quiet or something like that. Then you can make up too many excuses. You have to understand what time you are most creative and productive and try and set some time apart to do it. It’s important to take it seriously, and I don’t mean to be all dramatic and cocky about it, I just mean that if you decide you want to write and like writing, than build it into your schedule the same way you might build in a visit to the gym or a cooking class. 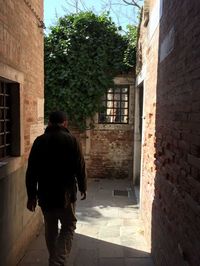 Chuck Vance is a pseudonym for a bestselling writer of both adult mysteries and novels for young adults. Vance attended boarding school in Connecticut and graduated from Columbia University. Vance has lived in New York, Moscow, London, Paris and Los Angeles and is frequently on the move.