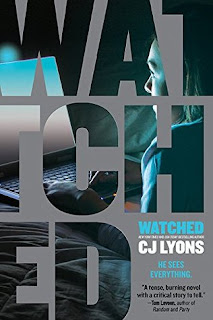 First thanks to Sourcebooks Fire and Netgalley for allowing me to read an egalley of this.  I didn't get to it before it was published, but did get to it as part of my COYER challenge this summer.  I was sad to not get to it earlier, because I loved the first book I read by this author, Broken.  This was a completely different type of story, but still, a very good one.  Watched focuses on a newer type of crime, or at least one that I feel hasn't been publicized as much and is only lately starting to be heard about, it's called capping.  According to the definition at the beginning of the book, capping is the practice of capturing covert screenshots, usually of underage girls and boys, and then using them to coerce the subjects into performing sexual acts on video.

We have two main characters, and the story is told from their viewpoints in alternating chapters.  First is Jesse.  His life is not his own.  First, he lives with his mom and younger sister at his uncle's house since their father disappeared with no warning.  His uncle has been sexually abusing him since he was little.  And one time a man named King, a hacker, found out about his uncle and him, and began making them do videos for clients.  And once they did one video, now Jesse must keep doing them, or King has threatened his family, even going so far as to set his mom up on a blind date with a man that would have killed her.  Not to mention what would happen if the videos leaked out to the public.

The other character is Miranda, and she has also had her own run-in with King, who she calls The Creep.  But she stood up to him.  When he found a video that was posted of her from a 13th birthday party, he started blackmailing her.  Or tried, but she said no.  And then he sent the video public, and also caused problems for her parents.  One time her mother was even attacked.  She attempted suicide after one of his major attacks on the family and her family moved and tried to stay off the grid, or out of anything that might cause King to find her.  But now she has agoraphobia and can't leave.  But all she can think of is taking King down. And so she uses her computer skills to try to find one of the victims and get them to help her.  Her plan starts to take place once Jesse gets her package with a burner cell phone, and calls her.

But beating King won't be so easy.  He has covered his tracks really well.  And his own technology expertise means he can use computers just about anywhere remotely to keep an eye on those he "owns" or who are trying to stop him.

I guess this is a trend of something that is happening more and more.  Reading this book made me want to cover the little camera on my laptop to make sure no one is watching me.  I think this is a great teen read, shows just exactly how careful you have to be with what you post online, and just what could happen.  It shows that there are really creepy, evil people out there, whether you want to believe it or not.  But in the end it gives some hope that people can take back their lives if they try and are willing to do what is needed.  Another highly recommended book by CJ Lyons.
Posted by Lisa Mandina at 12:00 PM