Review: The Port Chicago 50: Disaster, Mutiny, and the Fight for Civil Rights by Steven Sheinkin 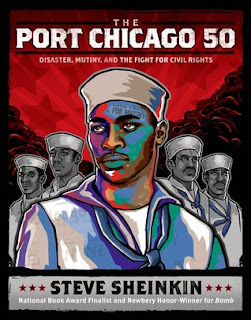 This book is one from the Battle of the Books list for the school district where I am a librarian.  I have to write the questions for the competition for this book, so I picked it up to read.  I'm glad I picked this book, because it really opened my eyes to things I wasn't aware of, things I wonder how many other people are actually aware happened.

This is a true story, based on 50 black soldiers who were accused of mutiny towards the end of World War II.  Now, I never realized just how segregated even the army was back then.  The black men were not allowed to actually go on the ships, or into the battles even. They worked on bases, had separate dorms from the white soldiers, and were only allowed certain jobs.  They couldn't even be promoted to officers in any way that would make them above a white man.

This specific story is about a base called Port Chicago which is in San Francisco.  It was here that bombs and ammunition were loaded in order to go to the soldiers who were fighting in the war.  It turns out this was being done by the black soldiers.  And really, they had no training.  No one knew what was dangerous, although it was often wondered about how it might actually be.  So, there were no regulations, and no rules.  And no one there who might have been an expert on the actual bombs themselves.  It was so unbelievable to me, because the officers would even have their groups race and bet on which group would load the fastest.  Well, as you might expect at some point something is going to explode.  On July 17th, 1944, there was a huge explosion, and because everyone on the boat was killed, no one will ever know exactly what happened.  The whole port was destroyed.

The black soldiers who weren't killed or severely injured were sent to another port to go back to work.  The ammunition was needed for the war.  But some of those men, 200 at first, were afraid to go back to working with the bombs after what had happened.  And they balked when they were first sent to do it again.  The basically said they would follow any order, other than they would not go load the bombs again.  They were threatened with being charged with mutiny, and even with being shot.  Some gave in, and went back to work. But 50 did not.  The book goes through their trial for mutiny.

Of all the civil rights fights, this is one I'd never heard of.  As I read this, the way people actually thought about other people just because they were different?  My mouth just dropped open in shock.  I was appalled and so horrified.  Yes, I know things were bad, I'm not trying to pretend they weren't.  I guess I just never realized that people, who normally you'd consider pretty smart, could really be that stupid based on racism or prejudices.  I think things like this book, as well as fiction like The Help, are really important types of reads for people.  While there is still much unrest between people even today, to hear just how some people justify, or at least used to justify their beliefs is really eye-opening.
Posted by Lisa Mandina at 9:58 PM