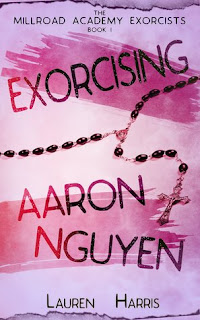 First I have to apologize to the author because I was late getting to this. And it is my own fault.  I forgot to put it in my reading schedule and didn't get to it until I remember in June.  I had emailed the author back in April about wanting to review the book, and she returned my email and said yes, and sent me an e-copy to read it.  The synopsis made it sound like a very good story.  It is just a novella, only like 68 pages, but it really tells as much of a story in that short number of pages as some books tell in much longer I think.  It was a very thorough and complete story.  I got to know so much about the main characters and even the side characters that it felt like I'd read a full length novel, in a good way!  I don't know when there might be more in the series, but I'm looking forward to finding out more about these characters and more ghosts!

The main character is Georgia.  She attends a private Catholic school.  She switched to that school after something big happened, but we don't know quite what it was, just that it has something to do probably with her being bullied maybe.  She doesn't have many friends, she's been teased for being overweight as long as she can remember.  Her best friend is a boy named Hiroki.  He has been friends with her since he first moved there.  He doesn't talk to many other people, and oh yeah, he sees ghosts.  In fact, a boy from the school, Aaron Nguyen, was found murdered.  He had his head bashed in among other things.  And since then, he's been haunting the school.  His hauntings have included setting a teacher on fire at one point.  While the priests at the school plan to exorcise Aaron, Hiroki knows that probably won't work, as Aaron wasn't actually Catholic.  Of course he and Georgia must figure out what or who caused his death, because as everyone knows who reads ghost stories, or watches ghost movies, that is usually why ghosts stay behind.  But to do this it will require skipping classes, dealing with an angry ghost, as well as with whoever might be responsible, who is obviously dangerous as well.

I liked how flat out unapologetic Georgia was.  I feel like her attitude and way of behaving was very realistic for many teens that I have known as a teacher.  It was humorous as well.  As a chubby girl myself, I love that she knew to make use of her best feature(s) by wearing v-necked shirts, and she wasn't shy about it.  I also like how she grew by the end of the story, figuring out what kind of feelings she really had for Hiroki.  It was done in such a perfect, genuine, realistic way.  I look forward to reading more by this author.
Posted by Lisa Mandina at 8:00 AM