Review: After Dark by James Leck 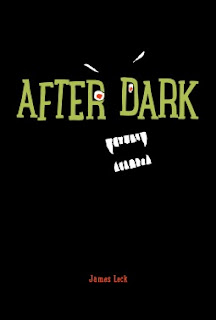 First, thanks to Kids Can Press and Netgalley for allowing me to read an egalley of this title.  I definitely enjoyed it.  It is more of a middle school level title, but not in a bad way.  I loved the main character who was just constantly sarcastic.  I mean even in the middle of danger his responses were snarky.  And I probably love it because my brain works that way so that I have to stop myself from saying those things all the time.  But it was fun to read a story where someone did just let it all out that way.  The reactions he got, well, I've gotten those myself before.  I also love how the names of many characters are from the original Dracula story, even though this isn't necessarily a vampire story, although it is kind of.

The main character is Charlie Harker, who moves to a small town where his mom is renovating a family bed and breakfast for them to live and run.  (Jonathan Harker was the guy in Dracula who went to his castle to help him with his affairs).  He's just finished the school year at his private school, where as usual, he was up to a lot of mischief and causing problems.  He arrives in this small town and is not real excited about it.  For one thing, in the past his family has always gone to the beach or other fancy vacation spots.  Now he's going to have to help his mother renovate the inn, and he doesn't want to spend his summer working, he wants to relax as in the past.  His older brother is an actor in a popular supernatural tv show.  His younger sister is kind of a severe girl, vegan, very into yoga and meditation, as well as martial arts.  They have a crazy uncle that lives there, and after a first strange meeting with him, the uncle disappears. This all leads into the conspiracy theory or whatever you'd call it, that the new boy he meets, Miles Van Helsing, is trying to prove.  (Van Helsing was the vampire hunter in Dracula, if you didn't already know that).  Miles is kind of the town crackpot. The sheriff knows all about him, and when he shows up the first night and is supposedly running from something, he makes Charlie and his mom stay in the house and lock the door because he says they are in danger. And then he won't leave.  So Charlie's mom calls the Sheriff who comes and picks Miles up and takes him home.

But when people do start acting funny, Charlie can't quite explain away all that Miles is saying.  And soon the whole town seems to be taken over, so Charlie and Miles must figure out a way to save their families without getting sucked into the zompire/virus or whatever it is that is going on.

Like I said, it was a fun read.  Loved how the craziness just went from one incident to another, and Charlie just happened to stumble into Miles and helping him out whether he wanted to or not.  The characters were fun to read.  This kind of left it open for a second book.  Not sure if one is planned. But I will have to read if it is, to find out just what will happen to Miles next.
Posted by Lisa Mandina at 10:33 AM