The Iron Daughter (The Iron Fey #2) by Julie Kagawa 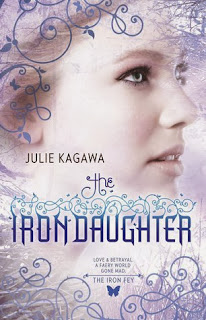 This is another book I got from my bookstore, and I enjoyed it as well.  Now, while it wasn't as good to me as the first in the series, it still had some parts that I did like even better than the first one.  If you haven't read the first one, there might be some spoilers, so be careful reading on.
Meghan was our main character from the first book, and she found out she was half faery, daughter of the Summer Faery King.  She also made a promise to the handsome Winter prince, Ash, that if he helped her find and save her brother, then she would let him take her back to the Winter court as he was supposed to.  So she goes back with him, but finds that he no longer seems to want to be with her, or as he tells her, there can never be a match between a Summer and Winter in their land. So she truly becomes a prisoner in the Winter palace.  And there are many dangers there, even from the fey that is supposed to be keeping her safe or guarding her.  Soon it comes time for the Summer fey to pass the season scepter to the Winter fey.  Of course this leads to a big celebration at the Winter palace.  During the celebration the Iron fey come and steal the scepter.  So now of course Meghan actually gets accused of it, or the Summer court does anyway, and Ash even gets considered a traitor because he sides with Meghan.  So now they run to try to find the scepter and save their world from war.  The Iron Horse from the last book is back, and he will help out this time, because since his Iron King is gone, he does not support the usurper for the throne.  Even if it is the Iron King's daughter.  Along the journey we meet some more great fey characters, and even learn more about Meghan's past life, the man she'd thought was her father to be exact.  She even gets a visit with her brother and mother and step-father, although not the type of visit she'd hoped for.  And with Ash seemingly gone as a possibility, Puck is still there, a loyal friend, who wants more, and Meghan isn't sure if maybe she feels that way about him too, although she does love him.
So we still have a bit of the love triangle here.  And we learn more about what caused Ash and Puck to no longer be friends.  We get a close look into the Winter court, and see that maybe Ash does really care for Meghan, even if it could ruin his life and relations with his family.
A great story, lots of suspense, it isn't a problem that is solved really quickly, and easily.  So great story!  Now I must get a copy of the 3rd book, because I've got the 4th one sitting on my shelf.

Oh yeah, don't forget to go enter into my Fierce Reads Giveaway and have the chance to be one of FIVE winners!!
Posted by Lisa Mandina at 11:33 AM