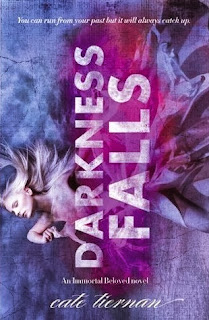 The first book in this series was one that I just loved.  It was the kind that picked me up and hooked me right away.  In fact, you can read my review of Immortal Beloved HERE.  This book was similar, in that once I picked it up, it was hard to put it down.  In fact at work today, I really didn't want to go back from my lunch break until I finished it. But, alas, work must come first in order for me to have the money to continue to read and live, and etc.  While I had purchased the first one when Borders went out of business, I ended up checking this one out from the library.  Part of the reason is because I have the 3rd one as an ARC that I got from BEA in the summer of 2012.  Which, on that note, I bought my plane ticket to go to BEA next summer!  Can't wait!  Okay, okay, back to my review of the book.
We of course left off with Nastasya at River's farm, which is kind of like a rehab place for immortals.  While there she's learned that the really hot viking guy named Reyn, is actually part of the family that killed all of her family.  She is trying to come to terms with this, as well as her attraction to him.  But along with that, she is still dealing with learning just how selfish she had been in her past. Things she is just now starting to see that where once she told the story about the miracle of her survival, now she realizes all the people or animals that died when she could probably have saved them.  On New Year's Eve they have a circle, and each Immortal releases something into the fire that they want to work on being done with.  Nastasya decides to release her darkness into the fire.  When she does, the fire grows to immense proportions before it dies back down, and she is afraid that she didn't get rid of it, but actually released it into the world.  While she is learning about how most all of the Immortals had a bad start or past, as more and more things go wrong, eventually she decides she is the cause of it, and runs away.  Fortunately it seems, Innocencio just happens to be driving by and he finds her.  Now all this time she'd been having horrible nightmares about him, that he'd gone evil, sparked by when he'd killed the cab driver in the first book.  And in her dreams she also sees all their friends dead, killed by Incy.  But it turns out she was just dreaming.  Incy has been worried about her this whole time, he says he was unable to find her, and then today he was driving around, and he felt a strange pull, that she was going to be where he found her.  So Nastasya goes back to her friends, and a life of luxury.  But things aren't quite the same now, now that she really knows right from wrong, thanks to River.  And she must decide where she really fits in, what life she really is meant for, who are really her friends, before the wrong person decides to steal her power.
Still a good book for all the same reasons as the last one.  But, I was not happy that she ran away and went back to her old friends so quickly, and slipped back into that life style.  That's my only complaint I guess though.  Now I have to figure out when to fit in the 3rd one.  Maybe after I finish my next e-galley?
Posted by Lisa Mandina at 8:36 PM