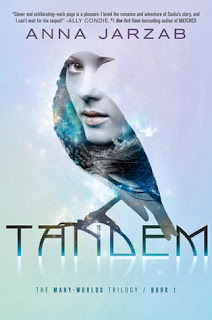 First, thanks to Edelweiss and Delacorte Books for Young Readers for allowing me to read an e-galley of this.  When I first picked it up, I had a bit of trouble wondering if I would actually be able to get into it.  I mean, the premise sounds really good, alternate universes, and the promise of some science aspects as opposed to just fictional parts.  But, once I picked it up and gave it a chance, I was very pleasantly surprised!
The main character is Sasha Lawson.  She lives with her grandfather, who is a physicist, because her parents died when she was young.  The stories he used to tell her when she was little were about parallel universes.  They used to imagine what they could be like, and make things up.  But one day, Sasha finds out they are real.  A boy she's known almost her whole life, named Grant, all of a sudden begins to show interest in her.  In fact, he even asks her to the dance.  But it turns out that Grant, well he really isn't Grant.  He is Thomas, from this other universe, and you might say he is Grant's twin, or doppelganger, or in this book, from Thomas's universe, they call them analogs.  And he has come to take Sasha back to his world to replace her analog.  See, Sasha's analog is the princess, Juliana to be exact.  And she is needed to help bridge a peace contract between their country, the United Commonwealth of Columbia and Farnham.  Basically the United States split into two different countries.  Princess Juliana has disappeared.  Now we know from the beginning of the book, and other chapters, that Juliana had left of her own will, thinking it would be best if she left, rather than marry someone she didn't want to marry. Sasha is basically kidnapped, taken against her will to the universe, and told by "the General" that she must portray Juliana for 6 days, until the marriage takes place, to help get their world back to where they want it.  Fortunately Sasha doesn't have quite as hard of a time, she has memories from what she thought were dreams of being a princess.  Somehow she has always had a link to Juliana.  But things in the alternate universe aren't quite as they seem.  Thomas's analog has also been kidnapped, and it turns out Juliana was betrayed by her conspirator and is now a prisoner as well.  The King was shot, and now seems to be mostly out of it.  But as Sasha visits him, she begins to feel that his random mutterings, may not be so random, and maybe be clues to figure out something.  She becomes friends with Thomas, and her assistant Gloria, even as she must deal with the hatred between her step-mother and Juliana.  She meets the prince from the other country that she must marry, and feels maybe he might not be such a bad guy, and the marriage might be a good idea.  The ending is a total cliffhanger, and about 20-40 pages before the end I kind of thought they might be able to end the story and not have it have to continue.  But no, it was left off with a very good cliffhanger, one that now I have to wait a whole year to read on!!
Some things I didn't like, I wish there had been a bit more science, I kind of wonder how taking the analog to the other universe, while the normal person was still there didn't cause any problem unless they touched.  My other complaint is that knowing genetics as well as I do, I'm not sure how Sasha and Juliana's parents could not be the same people.  So that's only two things I had a problem with, and they are kind of science related, as opposed to story related.  There are many more things I enjoyed I guess!  I really liked the characters, although once or twice when Sasha got mad at Thomas I thought she was being a bit silly, and some thing Thomas did were kind of annoying on the same thread.  But I loved hearing where the two universes began timelines in different directions.  How before that everything seemed to be the same.  The story reminded me a bit of the tv show Fringe.  The different universes that were very similar other than little differences that changed things, like on the tv show I loved how the Statue of Liberty hadn't corroded in the alternate universe, as it has here for us.
I highly recommend this book, and will be hand selling it at the store where I work, as well as adding it to my list of books to order for the high school library where I now work.  Oh and one last thought, how incredible is that cover?
Posted by Lisa Mandina at 12:26 PM