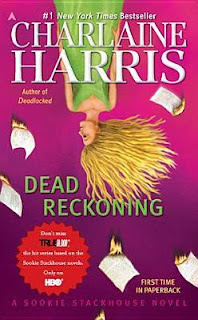 This was almost my 8th book in my September is for Sequels Challenge, but due to a horrible headache Sunday night, I just wasn't able to get as much read and get finished like I'd hoped.  So, therefore, it is just a regular old review.  :-)  Although, it is the 11th book in my TBR Pile Reading Challenge.
I bought this book last May when it came out in paperback.  I make myself wait until they come out in paperback because all the ones I own are that way since I started the series late, due to not getting into it until True Blood started.  This way I know that I have a new book to read next year and get to stay in Sookie's world a little longer.  Plus, it's definitely like I don't have tons of books to read anyway.
Well, I actually will have to say that I did like this one.  It had some really heartbreaking moments with Eric, and it was good to learn more about the fairies and Sookie's family.  Or maybe I just enjoyed it because it is what the story is really supposed to be, instead of this craziness of direction that the tv show has veered off to.
I love that Sookie is talking about how she's worried about gaining a little weight, makes her seem so normal.  And I love all the "normal" down to earth things as part of her life that the author puts in the stories.  Painting her nails, getting a tan, etc.  This story starts off with a firebomb being thrown into Merlotte's.  No idea who did it, while it is thought that maybe it is because Sam has come out now as being a Shifter, and people are now protesting them, Sookie seems to think that she saw someone who was two-natured like Sam running away from the scene.  Not only that, Eric is still having to deal with the person who is now in charge, Victor, who doesn't like Eric.  Victor is doing all kinds of things to hurt Eric, opening a bar not far from Fangtasia, and it even seems he's opened another bar not far from Merlotte's as well, hurting Sam as well.  And Pam wants so badly to finally create a child, but Victor will not allow her, and she has limited time to do it, as her lover is dying.
Eric also has found out that his maker made a mate for him, and if this goes through, Eric and Sookie will not be able to keep up their "marriage".  But Sookie is sure she loves Eric, and is very upset about this.  Plus, the fairies, Claude and Dermot are living with Sookie.  So she's learning even more about her fairy kin and how they've really been such a part of her life.  We learn why Sookie can read minds, and we even have a character from the past that we find is a much bigger part of Sookie's past than she knew.  Plus, there is are other creatures we've not seen before.
I really liked the story.  I'm left hanging not knowing what is going to happen with Sookie and Eric, which makes me sad, because I do love Eric.  Or maybe that's just because I love how hot he is on True Blood.
Posted by Lisa Mandina at 3:53 PM