2013 Truman Possibility 5: The Absolute Value of Mike by Kathryn Erskine 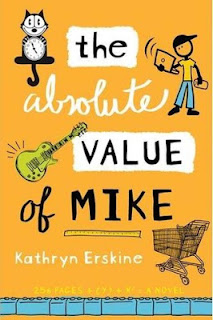 While this is a cute book, it's not really that great.  To me that is.  I guess it might be more of a draw to the 6th graders who read the Truman books, but it was really kind of childish.  It did have a good message, similar in a way to Silhouetted by the Blue, but told in a much sillier kind of way.  Which can be good, I just don't find it to be as good of a book.
Our main character is Mike, and he has a genius of a father, literally a genius.  But an absent minded genius.  He can't always remember faces, including his own son, and if it wasn't for Mike, they'd have lots of issues with bills getting paid, etc.  As in the other book I mentioned, Mike's mother is dead.  So it's a story of another single parent.  Well, Mike's dad assumes that Mike wants to be an engineer/scientist just like him.  Which, Mike doesn't.  In fact, Mike actually has an actual math disability.  Well, his dad gets a summer opportunity in Romania, but he can't take Mike with him.  So he sends Mike to live with his great aunt and uncle, Moo and Poppy, to help Poppy work on an Artesian screw, or so he's told.  When he gets there, it turns out that things aren't really that much better there.  Poppy isn't talking, or moving, or anything.  He's been really depressed since their son Doug died.  Moo doesn't make sure the bills are getting paid, or maybe doesn't have quite enough money from their Social Security checks to pay them.  One of the women in town is trying to adopt an orphan from Romania named Misha, which means Mike.  And it turns out that it isn't an Artesian screw he's there to help with, it's an artisan's crew.  They're supposed to be helping Poppy make these beautiful wood boxes that they can sell to raise money to help with the adoption.  So while Mike is trying to help out Moo and Poppy, he gets sucked in to help the town with the whole adoption fundraiser.  He meets a man named Past, who seems to be living on the streets.  He meets a girl named Gladys at the bank, she's got tattoos and piercings, and is supposed to be a really good singer, but she's too shy to sing in front of anyone.  Mike really works to help with this, even though his father doesn't approve.  And he helps the town by introducing them to using YouTube to help raise money.  And eBay.  And he tries to get Poppy out of his funk.  But of course, things don't go perfectly, and there are issues.  All in all, it does work out, of course, it's a kid's book.
It's not bad.  I did enjoy it, it's just not the best of the books that I've read for this list.
Posted by Lisa Mandina at 4:14 PM