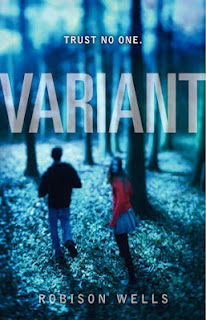 Now this is a book I've been waiting to read for a long time!  Almost every blog I've seen review it has really liked it.  And the premise of the story was totally intriguing.  And I have to say, I was not disappointed!  I was able to get a good deal on the book from the book fair at my school in September, $6.99, probably about what I would've paid for the paperback with my employee discount at Barnes and Noble, but this way I was supporting my school.
Variant is about a school, a private school called Maxfield Academy.  Benson Fisher is a foster kid.  He's moved from family to family.  The last one he was with had him working at their store all the time.  But not getting any money for it.  So he saw this school and applied, and he was lucky enough to get in, or so he thought.  When he got to the school, things were a bit weird.  The woman who drove him to the school, Ms. Vaughn, dropped him off and never got out of the car when he got there.  He soon found out there were no adults actually at the school.  All teenagers, who ran everything.  Security, maintenance, food, etc.  The classes were taught over a tv, and the subjects of those classes were unusual, aesthetics, field surveying, and also scheduled paintball games.  And no way out.  No connection to the outside world, no phones, no internet, nothing.  And what's weird is that there is a ton more classrooms than are needed for the number of kids.  It's not quite like The Lord of the Flies, although Benson heard it was like that at the start, the gangs would fight so much that there were actual deaths.  And now the "gangs" or groups, have come to agreements on how to deal with all of this.  Yet when Benson first gets there it's almost a fight to try to get him to join a gang, each gang tries.  But he decides to be a V or a Variant.  He learns that breaking the rules can mean a detention, and most people don't come back from detentions, and are later told they're dead.
So, I have to say that while the people here try to assure that it isn't like Lord of the Flies, in a way it still is, just maybe a controlled experiment.  And Benson tries to figure out that if it's some kind of an experiment, what in the world are they trying to find out?
And man, what a huge cliffhanger!!!  While I'm ready for more single books, non-series, I am eager to see where this story is going.  I'm guessing we still have some big surprises in store, as there is no way we know the whole story yet.  I can see this being a popular book for the Truman award, so I have a feeling it will be a definite one on the list for next year.
Posted by Lisa Mandina at 2:46 PM