2013 Truman Possibility 6: The Girl of Fire And Thorns by Rae Carson 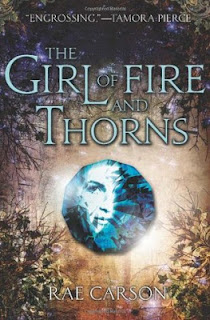 I hate to admit it, but once again I had let my judging a book by its cover keep me away from a really good book.  As I've mentioned before, I'm not really a fan of fantasy.  It takes a really good story or writing to draw me in.  This one did.  So glad that I had to read it to help pick the Truman nominees for next year.  I find so many good books through doing this.  I love, love, loved this one too!  It was hard to put down.  I hated every moment that took me away from reading.  In fact, I almost wanted to read instead of go to the movies Friday night!
Anyway, I was in love with the main character, Elisa, by the very second page.  As a bit of a chubby girl myself, reading about her having trouble being squeezed into her wedding dress made me an immediate sympathizer.  In fact, it made me wish I too lived in a time when a girl's marriage would be arranged.  How else would someone like me ever find an attractive, successful man to marry?  But anyway, that's off topic.  Elisa is a princess, the 2nd daughter in her family, and her father has married her off, promising King Alejandro to send troops to help with future battles.  But Elisa is not just the plain younger sister.  She also has the godstone, it means she was chosen by God to complete some act of service for him in the future. This also puts her in danger from people who would want to capture her and use her for their own nefarious purposes, not to mention the animagus who would cut her godstone from her body to use for their own magic.
We begin with the wedding, and then Elisa heads back with Alejandro to his country.  Only to find out that he wants to keep their marriage a secret for the time being.  Elisa is of course disappointed, but not completely surprised.  On their way to his country, Joya d'Arena, they are attacked as they cut through the jungle.  Elisa sees her husband freeze up, and she must save him.  She also sees her nurse Ximena take her hairpin out and kill a man with it when he figures out that Elisa has a godstone.  Yet another disappointment is a woman at the palace that Elisa figures out is Alejandro's mistress.  Turns out Condesa Arina sets her maid Cosme to spy on Elisa.  But Elisa turns the tables, and asks Cosme to come attend to her needs.  Soon Elisa learns there are things about her godstone that she hadn't been taught, and seeks out Father Nicandro in the palace's monastery to learn more.  Her nurse Ximena does not seem to be as open, so Elisa meets with the Father to find out what she can.
But more happens, Cosmo is not who she seemed to be.  She actually is from a desert tribe that is already fighting the enemy, the Inviernes.  She kidnaps Elisa and they take her to help their people.  Walking through the desert, Elisa loses a lot of weight, she also learns to be tougher, at first she can't walk the whole way, she needs to be helped.  But once she gets to the village, and realizes that these people need her help, she does her best to help them.  Along the way she gets to know Cosme's brother Humberto.
I won't go much more into the plot, just to say that it is great.  While in a way there may be a tiny bit of a love triangle, let me just say that in no way are both guys perfect.  And she doesn't necessarily end up  happy with either one!  I won't give away what happens.  Just know that it is a different story.  Realistic?  Not sure, but not just a "fantasy romance".  An emotional read, and I love how Elisa grows, in a realistic way, throughout her ordeal.  But she does not all of a sudden become a perfect swordsman or fighter.  It is all what makes sense.  If you haven't read this yet, you need to!!
Posted by Lisa Mandina at 8:21 PM