2013 Truman Possibility 3: Silhouetted by the Blue by Traci L. Jones 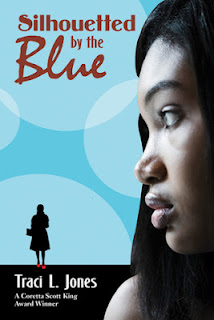 So once again I'm reading to help choose the Truman Award Nominees for 2013-2014.  I've actually already read 2 of them, The Eleventh Plague by Jeff Hirsch, and The Name of the Star by Maureen Johnson.  So this is the 3rd one on the list I've read.  I'm not going to go back and change the title of those reviews, but from now on I'll put "2013 Truman Possibility" in front of the titles so that I can keep track of them as I read them.  I have to get them all read by December 1st.  Not sure how that's going to happen, but I'm working on it.  There is one that I know for sure I don't want to read all the way through, The Emerald Atlas.  But I'll give it a bit of a chance, probably as the last book.  Anyway, let's get on with my review of this book, Silhouetted by the Blue by Traci L. Jones.
This was a great book.  I gave it a 5 star rating on Goodreads.  It was just such a realistic story to me, and it kept me reading when I picked it up.  I think kids would really get into the realism as well.  A lot of students don't like all the fantasy in stories, they want to read something they can relate to, or that is just plain "real".  And this book is perfect for those kids.
The main character is Serena.  She lives with her father and younger brother Henry.  Their mother died in a car accident about a year and a half ago.  Her father has slowly slipped into what Serena calls a "blue". Basically he is depressed.  He sits around the house all day and sleeps or does nothing.  He doesn't help Serena with her younger brother, or make sure there is any food for them, or even work so that they have money.  Serena is in 7th grade.  I think her brother is about 2nd grade.  Serena now has to walk him to school, make breakfast for him, and pick him up after school, make dinner for him, basically run the house.  But Serena just had something wonderful happen at school, she got the lead in the musical, The Wiz!  Normally the lead parts go to 8th graders, so this is very exciting.  But Serena has a beautiful singing voice and that is what helps her get the part.  She has two best friends, Nikka and Kat.  Another girl, one of those really pretty, perfect girls that you want to hate, but can't because she is really, really nice, named Candy, is also friendly with Serena, and is going to be her understudy in the play.
The play is very important.  It could help the school get special funding for the drama department for like 2 or 3 years.  So it is very important that Serena be at all the rehearsals and do her best so they can wow the committee that decides who gets the grant.  But right away Serena gets a call from her brother's school and she has to go pick him up and bring him with her to the rehearsal because her dad never showed up to get him.  Fortunately for Serena there is a boy named Elijah who helps her out when the teacher isn't really happy about a little kid being at his rehearsal.  Elijah is a cute boy that Serena has Spanish and other classes with.  She convinced him to come be a part of the play because of his artistic abilities.  He gets Henry, her little brother, involved with the sets.  Turns out that Henry is also kind of artistic, which would make sense, as Serena and Henry's father is a famous children's book illustrator.
Things at home don't get better though.  Her father sinks deeper and deeper.  Doesn't take a shower, wears the same pajamas every day.  One night Serena finds her father out in the car.  Which really scares her, but he says he is just out there because the car still smells like her mom.  And he is looking at a photo album.  Serena tries really hard to contact what family she has for help.  But her grandmother has really bad Alzheimer's and can't seem to remember she is Serena, and not her mother.  Her uncle is a world traveler and while she tries to stress to him how much she needs him, he doesn't quite get it.  And it just gets worse and worse.  Soon, after a search on the internet about depression, Serena knows her father has to get to see a doctor.  He's begun giving away important things in his life to people, and there are other signs that this depression could lead to suicide.
This book was heart wrenchingly realistic.  I've had students who had to deal with parents who committed suicides, and while this book did have a happy ending, I like how realistic it is up to that point.  I know students who have to take care of younger brothers and sisters because their parents are working two jobs, or doing drugs, or are even depressed like in this book.  And I think there are kids who will really relate to this.
A great, emotional pick for one of the nominees this year.
Posted by Lisa Mandina at 10:47 AM