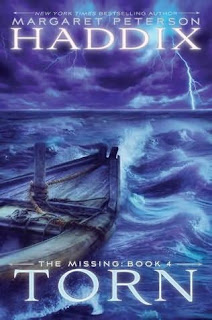 This is my 3rd sequel towards my September is for Sequels Challenge goal.  I don't think I'm going to make my goal of 8 books unfortunately, but I'm hoping to at least get what I set the minimum as 4.  I don't know that I included this on my original list either.  But it has been sitting on my TBR shelf since last October, when our school had the book fair and I got it for a good price.  Plus I saw there is a new one in the series after this one, so I need to get ahead and ready to read that one too.
When we left off in book 3, Jonah and his sister Katherine had been sent ahead to 1611, and didn't know where they were or why.  And it turns out they'd been sent to Henry Hudson's ship on what was his final voyage looking for the Northwest Passage.  Jonah must pose as John Hudson, Henry's son, who was one of the children taken from history.  Katherine must stay invisible.  But just as they reach the boat, a mutiny has begun, and Jonah is knocked out.  Or his tracer of John Hudson is.  And now they're thrown off the boat into the smaller boat called a shallop, with his father and the other sick and weak men from the ship.  As they're floating there, wondering if this is the end, something strange happens.  The ship comes back and pulls them back on, one of the men has overtaken the mutineers and come back to rescue Henry.  Not only that, he leaves the mutineers on the ice.  Now, this is a big change in history.  The man who did this, Prickett, seems off to Jonah.  Something about him, his voice, his actions, seems familiar.  And Jonah and Katherine soon find out he is really Second, wearing a disguise to make him look like Prickett, just like Jonah is wearing to look like John Hudson.  Eventually, they learn that time is really unraveling, there are many signs.  And they learn that at those times, there are different rules than they originally thought.  Jonah must still try to help Second in order to try to save Andrea.  And while the bargain is somewhat kept to Second's satisfaction, other things become changed.
I think the reason this was less "fun" for me, is that the story of Hudson isn't as big a story as the other books have covered.  And the last one, the story of Roanoke, was a story I was really fascinated with.  I'm glad to see another book coming out though, because I do want to know what will happen next, and what JB's last comment of "Have fun . . . while you still can." refers to.
Posted by Lisa Mandina at 2:02 PM