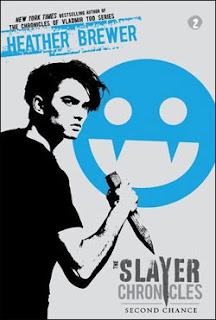 I was so excited to get this ARC, and it came from the author herself!  When I emailed and asked if there was anything she'd be willing to do to help me celebrate my 3rd Blogoversary, she emailed back saying that she was sending me something in the mail, and this was what I got!!  The awesomeness of the author aside, I really enjoyed this book.  I think actually I'd give it a 4.5, if I was able to give half stars on Goodreads.  Not a perfect 5, because I did have one thing that bothered me a tiny bit.  As I got towards the end, it seemed almost kind of rushed, I felt that there could have been more time spent with Joss and the other Slayers in NYC.  Maybe it's just because I wanted more time with them, that their summer seemed really short to me.  And I just didn't want the book to end so soon!!!!

So, as this series goes, we are learning about where Joss was in the summers between when the Vlad Tod books took place.  At the end of last summer (spoiler alert if you haven't read the first one yet) Joss had to kill Sirus, someone he'd grown so close to and even had gotten to be really good friends with his daughter Kat.  But as far as everyone other than Kat knew, Sirus had died in an accident.  And Joss doesn't know for sure if the others knew, but he learned that Sirus was a vampire.  The Slayers' sworn enemies.  What Joss was brought to the camp to learn how to kill.  But Joss was also in trouble for another of the Slayers that died in his negligence at the camp.  We do start the book with Joss coming home for the summer from staying with his cousin Henry.  It was there that he met Vlad Tod, and found out that vampires might not all be horrible creatures, even after he tried to kill Vlad.  I mean, he still remembers how great Sirus was to him.  So Joss has confusion still about the whole right and wrong.  I mean, his family is still messed up from losing his sister.  His father is still mean to him, and his mother is still quite out of it.  So when he gets a call from his uncle Abraham to come spend the summer with him, according to his dad to whip him into shape, but Joss knows it is for the Slayer Society, he is ready to go.  To prove himself for the mistakes he made last summer.  Plus, he is getting cryptic texts from Kat, Sirus's daughter.  She intends revenge for her father's death.  Once in NYC, it turns out there is a vampire serial killer.  One who is killing with what seems to be no rhyme or reason.  As Joss and the other slayers begin to investigate, Joss is given lead on the situation.  And he does find information.  And they follow those leads.  But once again there is confusion, when they run into a family member of the one of the Slayers that is a vampire.  And then Morgan, one of the Slayers, knows Dorian, the man who sent Joss his grandfather's stake, and Joss doesn't know how there is a connection there.

Lots of suspense in this book.  Lots of action, and lots more vampires to learn about.  I'm enjoying reading from this point of view, and relating it back to the Vlad books to fit the pieces together, although some things open more questions!  Which is good, because it means I'm ready to read on in the series!  Once again, Heather Brewer has done a great job.  One reason why I was so excited when the community resources manager at the Barnes and Noble where I work told me she was going to be coming to our store in October!  I can't wait to meet her again!  You can see in the picture below when I met her in the Spring of 2011 at the Missouri Association of School Librarians' Spring Conference, when she accepted her award for winning the Truman award in 2010. 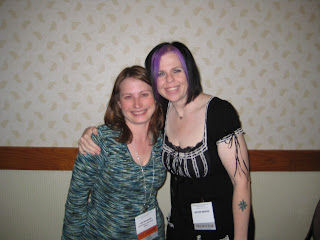 This was my 6th book in my September is for Sequels Challenge.  I was so sure I would be able to make my goal of 8 books, as I was almost finished with this when I went to bed Monday night.  But then, I only got to read a little at breakfast on Tuesday, and then I was sick, had to leave Parent Teacher conferences early, and so no reading yesterday.  Horrible day.  I'm starting a new book today, a shorter one as well.  If I could get it done by Friday, I could sure do my best to get an 8th book done by Sunday at midnight, but we'll see!