Silence by Becca Fitzpatrick
My rating: 4 of 5 stars

I only gave this 4 out of 5 stars. But that's more on me, than the quality of the book. It was good, but it feels like so long ago that I read the first 2 books, or maybe just so many books that I've read since, I was a little lost at first. Kind of like Nora. We get a quick flash at the beginning back to what was happening at the end of the last book, enough to make me think I needed to go back and re-read it, because I was a little unclear about some of the details. But fortunately, the author is nice enough to give us Nora's flashbacks, as she's remembering, as well as when she can get into Patch's memories through his wing scars, and that helped to catch me up. I also for some reason don't seem to remember Nora being such a goody goody as she thinks she is in this book. I may have to go back and read the first one again. I just didn't get that from her the first time I read it. But, I have to admit, that I do connect with that side of Nora a little bit more. As I was quite the goody goody as a teenager. But I like how the story goes in this one. We're introduced to some bad guys towards the beginning that I was sure would show up again, but they didn't really seem to till the end. There were some scary moments with them though, until Jev showed up. And I really want to know what Jev stands for now. Nora's best friend hides the whole thing about Patch from her, as well as her mother, who is now dating Nora's worst enemy's (Marcy Millar) father. And not only is he a car salesman, and one of the richest men in town, he is also the Black Hand. Which Nora finally starts getting clued back into after her encounter with those bad guys I was talking about, Gabe and others, and then when she meets up with her childhood friend, Scott. Who is also a Nephilim, who is hiding from Hank, because he does not want to swear fealty and have to give up his body.
The archangel we meet at the end of the story and what she has to say to Patch and Nora sets us up for the last book in the series. And I was left needing to know what would happen. Will Nora step in to take over for her "father" Hank's army, and will she end the war, or will she have to lead the rebellion as he asked? All in all this was a good next book, and now I'm ready for what I'm sure will be an awesome Finale!!

And, I have to include my picture from meeting Becca Fitzpatrick this summer at BEA. 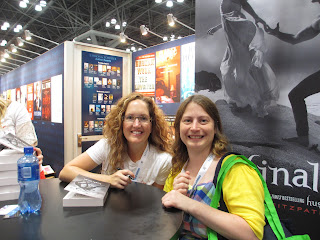 And my blurry photos of the hot angels walking around the line we stood in while we waited to meet her! 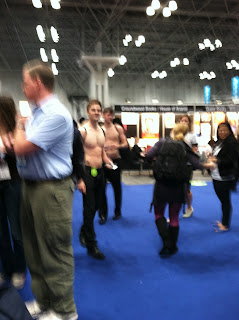 This is my 4th sequel of the month, so I've reached my minimum I set for anyone participating, but I'm guessing in about a week or so I won't get 4 more read.  :-(

View all my reviews
Posted by Lisa Mandina at 3:52 PM