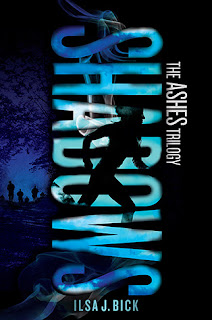 This is one of the awesome ARCs I got at BEA this summer, and I was so excited to get it!  It turned out to be my first book on my September is for Sequels Challenge because the one I had decided to start I was having trouble really getting into.  If I put a book down, and it isn't hard to do, and then I'm not thinking about when I can pick it back up and start again, then I know it's not time to read it.  I hope to go back to the other one soon, as it was a series I did really enjoy.  But anyway, on with my review of this book!
I have to admit that it has been awhile since I read the first book, Ashes, since I got to read it as an e-galley from Netgalley before the book was actually published.  But I remembered really liking it.  Unfortunately, I was a little unclear on where it had ended, the whole ending in fact was a little fuzzy in my mind.  So as I was reading this sequel I had to read every detail as it filled in my memory, without a whole "recap" sequence at the beginning.  And while I'm still going to go back and look through the end of the first one again, I eventually was able to remember pretty much what had happened, enough that I could get back into the story and just be grabbed.  This was a huge roller coaster of a story!  We followed Alex, the girl from the first book that I remember the most about.  And we also get to see what happened to Tom, who had been with Alex up until the gas station part in the last book, and that was all I remember for sure about Tom.  And then we had Chris, who I thought I remembered something about, but now I realize I was confusing that with another book I read, I think.  Like I said, I need to go back and read the end of the first one again.  But in this book we are seeing where they all ended up after the big conclusions of the first book.  Both Tom and Chris are kind of wanting to find Alex, especially Tom.  But Alex gets captured by some of the Changed, or Chuckies as they are sometimes called by people in the book.  And for some reason, they are keeping her alive.  One of the Chuckies looks really familiar to her, like Chris actually, could be his brother/twin.  And he seems to be the reason she is being kept alive.  But Alex can still sense or smell things with a heightened sense.  And she also begins to see the things that some of the Changed are imagining.  Which includes Wolf, Chris's twin, being sexually attracted to her.  And it's not just his thoughts about her.  All the Changed seem to be going through what might be called a mating season, they all seem to be about lust and getting busy with each other.
Tom has been living with this nice older couple who are helping him get better, as well as hiding him.  You see young people who haven't changed are highly sought by many different groups.  Militias for fighting or some for experimenting to see why they haven't changed like the others below a certain age.  But of course, he has been found, and so must leave, which he had planned anyway so that he could go search for Alex.  On his travels he stops in to what seems to be a friendly farm couple, only to find they've got one of the Changed locked up in their barn. And it is at this point they decide to keep him, and turn him in to the same people that they are keeping the Changed for.  He is saved once again by an older couple, although they have been looking for him.  Alex had told everyone about Tom's military past and explosive expertise, and this couple is looking for him to help with their fight against Rule, the town where Chris came from.
Chris has finally found out what has been going on in Rule, yet his grandfather is using him as a scapegoat.  And he must escape from Rule.  And so he goes out to try to find what he can do to solve this issue.  His way is not easy either.  He is with Lena and also Nathan, who has been trying to help them escape when they get sent to the prison.  Lena is feeling sick, actually thinks she might be pregnant from an encounter with Peter, who was lost in the big fiasco at the end of the first book.  Or so we thought lost, he also gets part of the story in the book, when he is captured by one of the militia and basically being experimented on.
Like I said, a roller coaster ride, full of nonstop action.  The end, another cliffhanger, but man, now how will I wait till the next book?!  Great sequel, if you haven't read the series yet, you really need to try it out!  I mean, if I hadn't been in school and had to work at my part time job last night, I'd have finished this over 500 page book in 2 days probably!
Posted by Lisa Mandina at 5:57 PM