First I have to thank the 3 sisters, specifically Nanette, as well as Goodreads.com for another awesome giveaway that alerted me to this book.  When I saw this book about cupcakes in New York City, right before I was getting ready to go visit my sister who like me loves cupcakes, AND lives in New York City, I had to immediately enter the contest to win a copy.  I also posted in my "review" space on Goodreads about how I really hoped to win since I would be able to use the book when I got to NYC in a few weeks.  Well, I didn't win the contest, but one of the authors, Nanette, who is also a Goodreads author, saw my comment, as well as the fact that I live in Kansas City, where she is from, and offered to send me a copy!  I was so excited!  It came about a week before I left, so perfect timing!  Now unfortunately, my sister was not quite as in to going to as many cupcake places as possible, but we did go to several in the book, and since I'll probably visit her again in November, maybe we can try some more!  So, here is my rundown of the book first, then I'll go through each of the places I visited and what my sister and I thought of them.

I liked the way first off, that the book was arranged.  The Table of Contents listed the different bakeries, grouping them by area they were located in.  Although, the section that was Stand Alone Bakeries did actually have some that were located in the other areas.  I loved all the pictures of the cupcakes in the book! For each bakery it described what kind of cupcakes or other baked items were available.  They gave a description of the building and the area that the bakery was in.  Items that might be unique to that bakery were also listed.  So all in all you got a pretty good feel for each bakery, mostly.  I personally would have a bit of a different twist if I did the book, even though my sister kind of made fun of me for this.  To me, the BEST cake/cupcake, or what proves it is really good, is the plain old white cake with white buttercream icing.  Or, the chocolate cupcake with the white icing.  I know the unique cupcakes are awesome and can really help a place stand out, but I always want to start with my favorite and see if that is great, and then move on to try more exotic or unusual flavors.  This is not a bad thing about the book, just saying how I would put my own spin on it, and how my review of each place will be.

The first place we went was not actually out of the book, but it was on the way to the Javits Center, where I would be going to BEA, it was a restaurant called Burgers and Cupcakes.  The burger was pretty good.  The cupcake was only okay.  It was like a homemade cupcake, the icing was wonderful, but the cake was nothing special, a little dry. 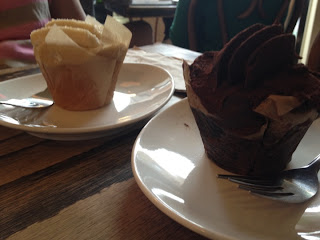 Now, the next place we went was from the book, it was called Sweet Revenge and it was in Greenwich Village.  We set out to see this area, and to have a cupcake here.  It was a cloudy, kind of gloomy day, and it seems like as soon as we sat down in this quaint little shop, it started pouring down rain.  The front of the store was pretty open, so we got to kind of enjoy the rainy day while eating our cupcakes.  As I mentioned before, I had the basic white cupcake with white icing, called the Pure, and it was delicious!  This was a Mexican Vanilla cupcake with Mexican Vanilla icing.  I loved it, the cake was a bit unusual, and the icing was wonderful.  My sister had the Dirty cupcake, which was Valrhona chocolate cake with Dark Chocolate Truffle.  She said the cake was okay, and the icing was rich and delicious!  So our first stop from the book was a success!
The 3rd place we went was called Butter Lane Cupcakes and it was in the East Village.  We were actually heading down there to meet one of my favorite authors, and I consider a friend, Cara Lynn Shultz, at her husband's bar.  So we had dinner at a 10 cent wing place, and were really full by the time we headed over to the cupcake place.  And Cara had texted to say that she and her friend Nancy, a fellow blogger, were already at the bar.  So we had to hurry to get a cupcake.  And we also figured we get it to go because we were so full.  Now, the first thing, by checking in there for the first time on the app FourSquare, we got a free icing shot!!  And let me tell you, their icing is to DIE for!  Delicious! That alone probably made it my favorite place out of the book.  Unfortunately, my sister had the great idea of putting them in the fridge when we got back to her place, and when we got them out the next day, the cake was a little hard.  So, I plan to try this place again, but this time I will eat my cupcake right away.


So next we decided to try the Spot Dessert Bar in the East Village.  We had heard from Cara and her husband that the best cheap burger was at a place close by, so we went for this after the burger.  This sounded really fancy, and when we went in we were seated to be served.  But we looked at the menu and decided it was a little too different of flavors for us.  And so we left to go to another place out of the book.  So another place in the East Village was Pinisi Cafe and Bakery.  I decided to go on the wild side and try a red velvet cupcake.  There were two little chairs right in front of the shop, so we sat there and ate our cupcakes.  They were okay, I just kind of wished they'd had the daily special talked about in the book, as it wasn't necessarily something I just fell in love with.  Again, that could be because it was cream cheese icing, as appropriate for red velvet, instead of my buttercream favorite.  As we continued wandering around the area, we strayed over to what is called Nolita, or North of Little Italy, and walked right by The Little Cupcake Bakeshop.  Since we'd just had the other cupcakes, we kind of just walked in and looked around, and just got a lemonade.  Plus, it was about this time that I was starting to run out of money for my NYC trip, so I couldn't really afford to buy another cupcake.  Especially not knowing how long until we would go home, so I would have been carrying it around for awhile.  But I kind of wish we'd waited to get one here.  The selection and variety was huge!  And so yummy looking!  I think this will be on my list to possibly go try out next time I'm in NYC. 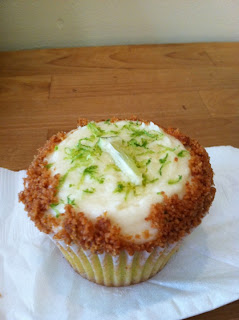 The next place we went to, or tried to go to was called Dessert Club, Chikalicous, but it was packed!!!  So instead we went across the street to the companion place called Chikalicious Dessert Bar.    Now, I was disappointed to not get a cupcake, especially when I saw the PRICES of the fancy desserts here.  I wish my sister had offered to just share one with me, not that it was a huge serving, just the cost was insane, and again, I was getting low on money.  It was a very fancy place, the desserts were prepared right in front of us, by the owner!  I'm glad I had the experience I guess, just wish it hadn't cost so much, and had been a cupcake instead.  We did however go back the next day, and first ate at a Mac and Cheese place, that was yummy!  Then, we went to the cupcake place, Dessert Club.  I think my sister was glad we did, because she had a dessert that she LOVED!!  I had a yummy Key Lime cupcake.

The last cupcake I had was at a place named in the book, but not at that specifically mentioned location.  It was the Crumbs Bake Shop.  It was like walking into a candy store, they did in fact even have candy that could be purchased.  I should have taken a picture, but I only took one of the specific cupcake I chose, which was a cotton candy flavored cupcake.  And it was good.  The icing was wonderful.  The cake was a little dry, but not too bad.  I would definitely order from them again, and my sister had actually gotten an extremely yummy cupcake a while back.

I'm really missing all the cupcake stores now that I'm back home in Kansas City, but I am realizing after talking to family and friends, that there are some more places that I didn't realize around.  So I'm glad to know I won't have to completely go without cupcakes.  So many more in the book still to try, and you should definitely get the book, and go do your own cupcake tour next time you visit NYC.
Posted by Lisa Mandina at 12:57 PM