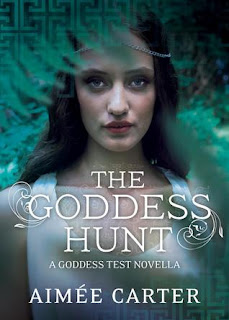 So, I was getting ready to read my brand new autographed copy of Goddess Interrupted from BEA, when I saw something on the bookmark I got with it about this story.  And I know that you don't usually HAVE to read the short stories set in between the novels to keep up, but I decided to go ahead and quickly download the $1.99 e-book on my Nook and read it before I jumped into the next full length story.  This was an interesting and short look into Kate's world in the 6 months after she's married Henry (Hades), and has been sent out into the world to have experiences before she spend her first 6 months with Henry ruling the Underworld.  In it, she's taken off with James (Hermes), to do some sightseeing, and of course the first, and most likely place they visit is Greece.  James seems to have a plan though when he takes Kate and they get "lost" on a hike in the woods. It is here that they run into Castor and Pollux, who are on the run of course from the other gods.  See, one was immortal, the other was not, and they wanted to share the immortality, but Zeus, now called Harold, tricked them, and said while they could share, one would be on the surface, while one would be in the Underworld.  And the thing was that they had wanted to be together!  So Pollux has broken Castor out of the Underworld.  Well, James has always been nice to them, and so he seems to want to just visit with them.  But instead, they end up running into other gods.  I think the point of this little story is to give us a look into how Kate will rule the Underworld.  As we saw in the first book, The Goddess Test, she doesn't agree that the way the council of gods often rules or makes their decisions makes sense.  Henry learns that he doesn't want to lose his wife, and that her decisions are a fresh, new outlook that is probably needed in their world.
I read this really quickly, and moved on to Goddess Interrupted.  I have to say that what I am really liking about these books is that they are doing the same thing that the Percy Jackson series by Rick Riordan did in a way.  As I read about the stories of the gods as told by Aimee Carter, the author, I am having to go back and look up the actual myths to see how close the interpretations are.  And I love that!!
Posted by Lisa Mandina at 10:30 AM