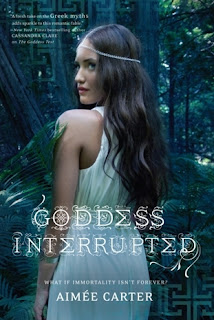 I was so excited to finally get to see Aimee Carter at BEA and get this book signed by her!  Instead of moving on with the egalleys I had on my Nook, I read it! And I was in no way disappointed!  In fact, you may have seen several posts from me lately about how the 2nd book in the series, while I found them necessary to move the story along, were not as good as the 1st book.  This book however, I actually think was just as good, if not BETTER, than the first one!  I of course had just downloaded and read the 1.5, The Goddess Hunt, before I started this one, but it wasn't needed.  There wasn't much reference to that in Goddess Interrupted, other than we know that Kate spent her 6 months off with James in Greece.  We start out with Calliope serving her punishment by meeting with one of the girls before Kate, Ingrid, that she killed.  But while she is here, she is distracted by a fog on the edge of Ingrid's After Life realm in the Underworld.  Turns out this fog is Cronus, the King of the Titans, and also the "father" of many of the gods.  As the mythology goes, they trapped the Titans in Tartarus, but now they are trying to break lose.  Which is not good for the gods or for humans!  Kate must rescue Henry, and also must figure out how to help the gods keep Cronus from rising.  But instead of coming home to the husband she is looking forward to getting to know and become close with, she comes home to Henry even more secretive and stand offish.  She keeps trying to get him to open up, to the point where she becomes quite a nag it seems.  In fact, this is the only part that almost kept me from giving it a 5 star rating on Goodreads.  With all the talk of how girls are not being strong and we are romanticizing bad relationships in these books, I could see how people might say this is the type of relationship they seem to have.  I don't agree, but I can see people saying that, so it was one thing that detracted from the book for me.  I loved though all the back stories we got, all the interpretations of the Greek myths.  I had to look some of them up online to see how close the book was coming once again to what I remembered reading.  Persephone comes back into the story, and so Kate's whole family dynamic is played out even more.  And while you want to hate Persephone, like Kate, you can see what happened, and kind of be a bit more sympathetic to her case.  Again, part of what will make Kate such a great queen of the Underworld is because of this empathy she has.  And wow, the end of this book, such a cliffhanger!!! And I can't believe who is the betrayer in this!  I had actually suspected this person a bit in the first book, so for it to be that person in this book, so unbelievable!  And I cannot wait till book number 3!!  Fortunately I do have the 2.5 book in the series, The Goddess Legacy to download from Netgalley!  I'll be doing that soon! And here is my picture when I got to meet Aimee Carter at BEA, even though I didn't get the book till the next day! 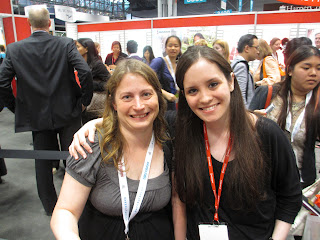