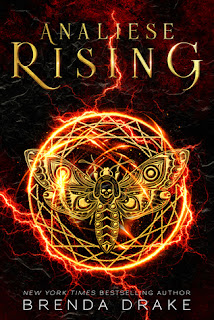 Half-Blood meets Antigoddess, American Gods meets The Da Vinci Code in ANALIESE RISING (Entangled; 01/08/19), a suspense-filled novel by New York Times bestselling author Brenda Drake. This first book in a new fantasy series offers a new take on the paranormal romance genre—with a mythological spin. Gone are vampires and werewolves; in are descendants of the God of Death.
Brenda Drake is known for creating addictive, entertaining series with strong female characters (Library Jumpers and The Fated) and her fans will not be disappointed.
When a stranger gives Analiese Jordan a list of names before he dies, the last thing she expects to see is her own on it. Not. Cool. Her search for answers leads to the man’s grandson, Marek, who has dangerous secrets of his own. Both are determined to unlock the mystery of the list.But the truth is deadly. Analiese is a descendant of the God of Death, known as a Riser, with the power to raise the dead and control them. Finding out she has hidden powers? Cool. Finding out she turns corpses into killers? No, thank you.Now the trail plants her and Marek in the middle of a war between gods who apparently want to raise an army of the Risen, and Analiese must figure out how to save the world—from herself.

My Review:
First off, there was a LOT of stuff going on in this book.  So many different gods and goddesses from different mythologies from all over the world.  Some I recognized, some I did not.  But this was really cool!  I love when I hear about things I don't know, and then the story makes me want to go learn more about them.  And that is what this story did.  There was a lot of adventure, a lot of history, a lot of action, and a little romance thrown in, all together these made for a good teenage story.  As I read, I was totally thinking about how I'd love to visit all these places mentioned, the Coliseum, the Louvre, etc.  I'm guessing that if there are more books after this, which it sounds like there will be, we will get to go to even more exciting places.  For one, I'd love to see some time spent in Egypt, or over in Asia with their mythology as well.  Another thing I really liked about the story was how Analiese had been taken in by her uncle, and that she'd grown up with him as her dad.  I think it is nice to once in awhile see a healthy step-parent situation, when so often there is not.  Although I wasn't sure I liked her step-mother, Jane.  By the end of the book I still was unsure about her.  Although I haven't read Antigoddess, all of the other books this is compared to in the summary are exactly right.  Definitely there is the feel of solving a puzzle like in The Da Vinci Code.  You've got all these different gods just wandering around, getting in trouble, or even just being a part of the world, like what little I remember from reading American Gods.  And you get the teen angst and fighting monsters that is a bit similar to one of my favorite series books, Half-Blood.  Definitely a recommended title for anyone who enjoys paranormal romance, or mythology of all kinds.


What does your writing process look like? Do you know the whole story when you start?  Or do you just start writing and go with it (seat of the pants writing)?  If you plan it out, how do you do that?  Outline, notecards, post-it-notes, etc.?


I do a plot graph to get a general idea of where I want the story to go. It’s pretty skeletal, just the bones of the story. While writing, I flesh it out, letting the story unfold as I go.

Do you edit as you go, or wait till you're finished before you edit?  How many times would you say you go over it yourself before having another set of eyes look it over?


I’m not one of those fast-drafting writers. I have to edit as I go. I’ll go over it a few times before I let anyone else see it.

Are you part of a writer’s group that gets together and helps each other with their writing?


I have a few author friends that I share work with. I’m not part of a writing group. I do have writer friends where I live that I meet for lunch or coffee. We discuss our writing and about publishing.

How do you come up with your ideas for your stories?


Ideas come from everywhere for me. Sometimes it a thing, a person, a song, or a movie that inspires a story. The inspiration for the Library Jumpers series came from a coffee table book on the most beautiful libraries in the world. As I scanned the photographs, I wanted to jump into the pages and visit each one, which sparked the idea for Library Jumpers. I imagined battles with knights and creatures fighting among the bookcases. I bought the book, hurried home, and started plotting the first book in the series. I got the idea for the Fated series while getting a tarot card reading in New Orleans. During the reading, I imagined someone being able to change anyone’s fate with a touch of a tarot card. Analiese Rising came to me while watching American Gods on Starz. I wanted to tell a similar story about gods and goddesses among us but without their powers.

How important are names in your books?  Do you choose the names based on liking the way it sounds, or the meaning?  Do you have any name choosing resources you recommend?


Names are extremely important to me. It has to fit the character, and I have to like it. I do look at the meaning before I settle on it. I think the meaning should match the character. I search Google for names.

What is your favorite:


My favorite book is The Secret Garden. My favorite author is J.K. Rowling, and my favorite genre is fantasy.


My favorite movie is Love Actually. We watch it every Christmas. My favorite TV show right now, since I’m binge watching it on Netflix, is Scandal.


My favorite music is anything by Imagine Dragons, Cold Play, and I lean toward Indy, but I love a variety of music.


I drink too much coffee, and I’m addicted to Goldfish crackers.
Book Blogger Aggregate