For many years I've participated in the Waiting on Wednesday meme, as well as more recently the Can't Wait Wednesday post.  After a while I got to where I wasn't always joining in, due to tours and other things.  However a year or so ago, I started keeping track of the new releases I found on Netgalley and Edelweiss that I wanted to read, and whether I downloaded them or requested them, and when I had to get them read and reviewed by.  I had to do that because I would forget because I was requesting too many.  Now I still keep track of them, have a whole page in my blog planner for each month where I separate these week by week.

I also used to always participate in the Sunday Wrap-Up Post, or the Stacking My Shelves Post each week.  But again, blog tours, and working at the bookstore, and then downloading so many free ebooks over the past two or three years, kept me from being faithful to always doing that.  However, no matter what, I still seem to be faithful to keeping track in my planner of the new books coming out that I see on NG and EW.

Mostly I look up YA books it seems, so you'll see a theme in these posts that way.  But I decided something easier to do, than a wrap-up post each week, or a WOW post in the middle of the week, was to just do one of these each week.   You see, I don't always get to these books, even if I really wanted to. And now I don't request them all, or download them all, trying to work on getting that Netgalley percentage up where it should be.  But this way I can look back at the ones I thought I might try to read.  I'll share if I've read them and either a link to the review or let you know when to look for the review.  If I haven't read them, and you have, I'd love to hear what you thought!

These are the books on my list that will be published on January 8th, 2019: 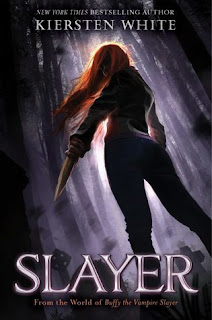 This was one I had to have a physical copy of, which I was lucky enough to finally find someone to trade with me on Twitter for.  Yay!!!  I read it and loved it, and my review was yesterday.  Now, I need to find out how to get on the list for an ARC of the next book in the series.

Here is the blurb from Goodreads:
Into every generation a Slayer is born…Nina and her twin sister, Artemis, are far from normal. It’s hard to be when you grow up at the Watcher’s Academy, which is a bit different from your average boarding school. Here teens are trained as guides for Slayers—girls gifted with supernatural strength to fight the forces of darkness. But while Nina’s mother is a prominent member of the Watcher’s Council, Nina has never embraced the violent Watcher lifestyle. Instead she follows her instincts to heal, carving out a place for herself as the school medic.Until the day Nina’s life changes forever.Thanks to Buffy, the famous (and infamous) Slayer that Nina’s father died protecting, Nina is not only the newest Chosen One—she’s the last Slayer, ever. Period.As Nina hones her skills with her Watcher-in-training, Leo, there’s plenty to keep her occupied: a monster fighting ring, a demon who eats happiness, a shadowy figure that keeps popping up in Nina’s dreams…But it’s not until bodies start turning up that Nina’s new powers will truly be tested—because someone she loves might be next.One thing is clear: Being Chosen is easy. Making choices is hard. 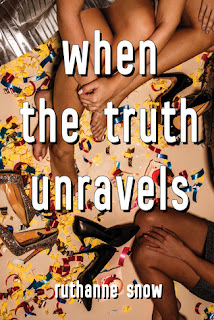 This is one that the synopsis definitely sounded like it could be a tear-jerker.  A contemporary type of story, one that I rarely request from publishers, but thought if someone had sent me a copy, I would probably have read it. Might be one I'd get for my school library for my students.

Here is the blurb from Goodreads:
Last month, Elin tried to kill herself.She knows she's lucky that her parents found her in time. Lucky to be going to prom with her three best friends, like any other teen. Like it never happened. And if she has anything to say about it, no one but her best friends will ever know it did.Jenna, Rosie, and Ket will do anything to keep Elin's secret—and to make sure it never happens again. That's why they're determined to make prom the perfect night. The night that convinces Elin that life is worth living.Except, at prom, Elin goes missing.Now it's up to her friends to find her. But each of the girls has her own demons to face. Ket is being blackmailed by an ex. Rosie is falling in love for the first time. And Jenna . . .Jenna is falling apart.And no one, not even her best friends, knows why.Heart-wrenching and utterly impossible to put down, When the Truth Unravels follows four friends as they confront their greatest hopes and darkest secrets in one life-changing night. 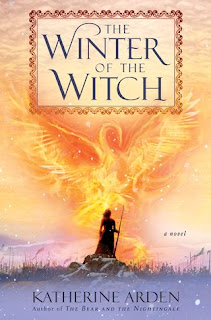 I was lucky enough to receive, I think through Goodreads giveaways, ARCs of the first two in this series.  I reached out to the publisher for a copy of this last one, and I think one is on the way, but I know I won't get it read in time for this pub date.  However I'm interested to see where the story goes, and how it all will end.

Here is the blurb from Goodreads:
Following their adventures in The Bear and the Nightingaleand The Girl in the Tower, Vasya and Morozko return in this stunning conclusion to the bestselling Winternight Trilogy, battling enemies mortal and magical to save both Russias, the seen and the unseen.Now Moscow has been struck by disaster. Its people are searching for answers—and for someone to blame. Vasya finds herself alone, beset on all sides. The Grand Prince is in a rage, choosing allies that will lead him on a path to war and ruin. A wicked demon returns, stronger than ever and determined to spread chaos. Caught at the center of the conflict is Vasya, who finds the fate of two worlds resting on her shoulders. Her destiny uncertain, Vasya will uncover surprising truths about herself and her history as she desperately tries to save Russia, Morozko, and the magical world she treasures. But she may not be able to save them all.Advance praise for The Winter of the Witch“Katherine Arden’s Winternight Trilogy isn’t just good—it’s hug-to-your-chest, straight-to-the-favorites-shelf, reread-immediately good, and each book just gets better. The Winter of the Witch plunges us back to fourteenth-century Moscow, where old gods and new vie for the soul of Russia and fate rests on a witch girl’s slender shoulders. Prepare to have your heart ripped out, loaned back to you full of snow and magic, and ripped out some more.”—Laini Taylor


Those are the three main ones on my blog calendar for this week. One I've read, one I'm going to read, and one that was at least interesting enough to note in my planner.  Have you read any of them?  Will you be adding any of them to your TBR?
Posted by Lisa Mandina at 6:00 AM