Blog Tour Review with Giveaway: Jaclyn and the Beanstalk by Mary Ting 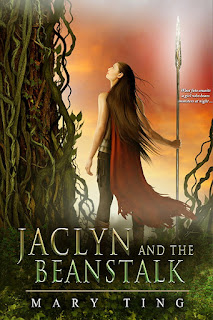 What fate awaits a girl who hears monsters at night…

Sixteen-year-old Jaclyn looks up to her father. An honest man who once fought for the king, he now teaches Jaclyn how to use her wits—and her sword.

But he has a secret. And his secret may have a connection to the one thing Jaclyn is hiding from him.

Upon hearing “monsters” are terrorizing the small villages around Black Mountain, Jaclyn’s father and his friends head out to hunt them … but they don’t return.

Armed only with her sword and three magic beans—a gift from a mysterious old woman—Jaclyn sets out for Black Mountain to save her father.

On her climb, one bean drops and grows into a beanstalk, catching her when she falls.

She isn’t the only one that takes the ride. Jack, her childhood friend and secret crush, is following her.

Jaclyn and Jack will have to work together to save not only their fathers, but the townspeople the beasts plan to lay waste to before it’s too late. 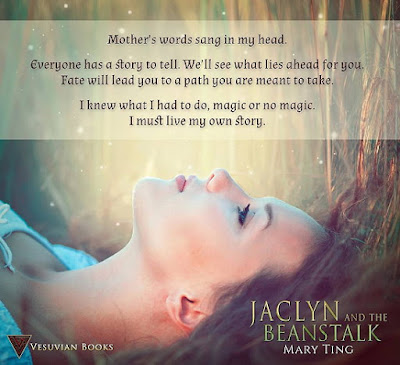 Praise for JACLYN AND THE BEANSTALKA mash-up of "Jack and the Beanstalk" and "Lord of the Rings" ... RECOMMENDED ―School Library Journal"Keenly descriptive and eloquently written with touches of sixteenth-century language, the story takes the reader into the world of monsters controlled by a diabolical villain, and into a land of mystery and magic beans." ―Readers' Favorite Review"Mary Ting managed to surprise me at every turn, even though I must have read this story a million times as a kid. The most impressive surprise was the creation of a girl protagonist who is so much better than the original Jack. Then she brings in the boy, Jack, as the love interest. Sheer genius and a great idea. The writing is great. The plot is good, and the various themes woven throughout the story make it a very compelling tale." ―Readers' Favorite ReviewMary Ting writes with an adventurous heart, a clever pen, introducing young readers to a classic that meets fantasy, shedding light on the family devotion and a love story that buds to completion by the end. This short novel comes as a highly recommended read for parents and young adults that prefer fantasy fiction with a Christian-based theme and a creative perspective. Mary Ting is one of those writers to notice and watch. ―Kingdom's Review


My Review:
If you've been reading my blog for very long, you'll know that I always look for these fairy tale retelling type of stories.  And this was a very unique one!  At first I was wondering just when we'd get into any of the things that were familiar about the Jack and the Beanstalk story, but it wasn't long before we got to the magic beans.  Even if they were introduced in a different manner, my brain was still like, "Ah-ha!  There they are!"  But this story had so much more detail and back story than the original fairy tale, and I loved all of that!  Now obviously the story is about Jaclyn instead of Jack, but the weird thing is, there was still a character named Jack, a main character actually.  I'm not sure I liked this repetition of names, but in the end, there was a reason it kind of worked.

I liked the way little things that happened at the beginning got explained later on in more detail.  Like the way that when she touched the one sword that she saw visions.  Finding out who the visions were of, and just what they meant later on, really added to the story.  I also loved what the magic beans did not only for the beanstalks, but for the story in the end.  And you know how if you're like me, you always kind of wonder what happens after the story, after the HEA?  Well you're in luck with this tale, because the author gives a few epilogues that show us just how it all goes.  I will say that there was a definite religious/Christian slant to the story, and for me it was a bit much at one point. But since I liked how that fed into the background of our "giants" or monsters, I was okay with that.  I haven't actually read this author until now, although I've done some promoting in the past because her books sound really good.  So maybe the religious part is something that is in her stories usually? I do know that this part of the story intrigued me and made me want to do some research into the story that I only remember the basics of. 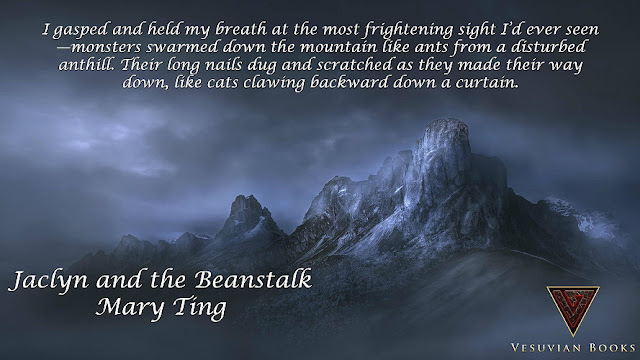 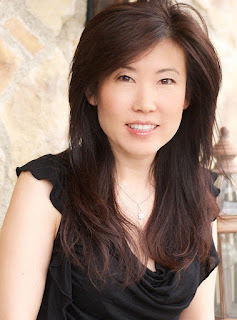 Mary Ting is an international bestselling, award-winning author. She writes soulful, spellbinding stories that excite the imagination and captivate readers around the world. Her books span a wide range of genres, and her storytelling talents have earned a devoted legion of fans, as well as garnered critical praise.Becoming an author happened by chance. It was a way to grieve the death of her beloved grandmother, and inspired by a dream she had in high school. After realizing she wanted to become a full-time author, Mary retired from teaching after twenty years. She also had the privilege of touring with the Magic Johnson Foundation to promote literacy and her children’s chapter book: No Bullies Allowed.Mary resides in Southern California with her husband, two children, and two little dogs, Mochi and Mocha. She enjoys oil painting and making jewelry. Being a huge Twilight fan, Mary was inspired to make book-themed jewelry and occasionally gives it away as prizes to her fans. 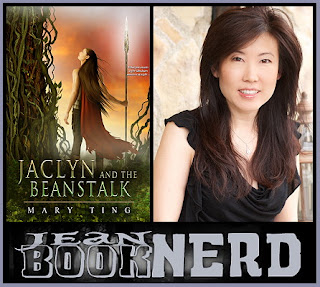