Four YA Mini-Reviews (Including an Audiobook and two ARCs)

You know the drill, I'm behind, trying to get caught up before next year, if that is at all possible.  Also, I didn't have any blog posts scheduled for today.  So here you go!

Fire and Ash (Rot and Ruin #4) by Jonathan Maberry: 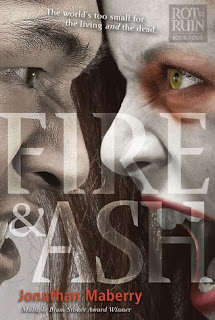 Published:  August 13th, 2013
Source:  Checked out from my library
Genre:  YA horror/zombies
My rating:  4 stars

Once again enjoyed this series by a favorite author of mine.  I started back in September, it was supposed to be part of my sequels challenge, but I didn't get it done in time.  I decided to read it before The Walking Dead started back up for the year.  It was great to get back in and see where the characters would go and how things would end up in the big clash between our heroes and the reapers.  I liked the way it ended, mostly, not sure if I liked one turn of Benny's life, but that is just how it goes, and is probably realistic.  I enjoyed getting Joe Ledger in the story, it makes me want to go and start that series as well.  Now all I have left is to read the novellas that go with the series that are all collected in the book Bits and Pieces.  You can read my review of the first books here:  Rot and Ruin, Dust and Decay, and Flesh and Bone.

In the gripping conclusion to the action-packed standard bearer (Booklist) of zombie series, the threat of death is given new life.Benny Imura and his friends have found the jet and Sanctuary, but neither is what they expected. Instead of a refuge, Sanctuary is a hospice, and the soldiers who flew the plane seem to be little more than bureaucrats who have given up hope for humanity's future. With Chong hovering between life and death, clinging to his humanity by a thread, Benny makes a startling discovery: A scientist may have discovered a cure for the zombie plague. Desperate to save Chong, Benny and his friends mount a search and rescue mission. But they're not the only ones on the hunt. The reapers are after the cure too, and they want to use it turn all the zombies into superfast shock troops and wipe humanity off the face of the earth.In this riveting conclusion to the Rot & Ruin series, the battle to end all battles is just beginning.

Meant to Be by Julie Halpern: 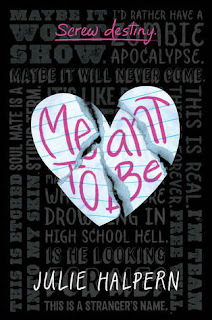 So, the title has to deal with how in this future, all of a sudden everyone had their ideal  mate or the person that they were "meant to be" with.  One of my first questions was if you were over 18, the age when the name of your MTB appeared like a tattoo on your skin, did you still get one?  And the answer was yes, it was retroactive.  Everyone over that age had their tattoo just appear.  Unfortunately, for those who were already married, it didn't mean that your MTB was the person you were married too.  That's what happened to our main character, Agatha's, parents.  Agatha doesn't want her MTB, she wants to make her own choice, while her best friend is gung-ho and very excited, a complete believer in the whole process.  This was really a fun, quick, and easy read.  I loved Agatha for many reasons, she totally was me in so many ways.  I mean she loved Chris Evans, Supernatural and Norman Reedus.  And then there was the fact that they watched old sit-coms, and I loved the whole line "You got it, dude!" from Full House.   In the end, the way it all went for Agatha, well, I loved it.  I'm definitely intrigued and going to have to put more of Halpern's books on my TBR.

In a world where the names of MTBs—"meant to be" mates—appear on the body at age eighteen, a girl must decide whether to believe the phenomenon or follow her heart in this YA novel.

It started happening a few years ago: the names of MTBs—"meant to be" mates—appeared emblazoned on the skin at age eighteen. Agatha's best friend has embraced the phenomenon and is head over heels in love with her MTB. But Ag isn't so sure. As she searches the interwebs for her MTB (who has a common name, no less) she finds herself falling for a co-worker at the local amusement park. Is he a better match? What does Agatha really want in a mate, and moreover, what does she want for herself?

With her trademark wit and irreverence, acclaimed author Julie Halpern explores an age-old question: Who are we meant to be with? Readers won't be able to resist knowing the answer.

As You Wish by Chelsea Sedoti: 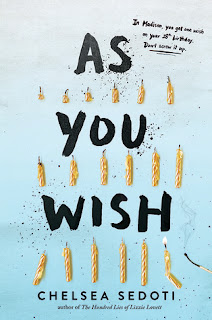 This book was really a very neat story.  The way that each of the wishes were granted or played out was exactly the reason that they always say you get what you wish for.  The thought that had to be put into the wish in order to even try to get what you actually wanted was crazy.  It was no wonder they had a class you had to take before it was time for your birthday and your wish. And no wonder the mayor wanted to know what you were wishing for.  What I liked most about this book though, was finding out exactly what people had wished for, and how it had worked out for them.  So many of the adults that had things go wrong with their wishes, so sad, so poignant.  I wrote my own wish on the little card that came with my ARC, and now I realize the way I had worded it, while what I probably would have said at the age of 18, wouldn't have probably ended up the way I wanted.  Here is my wish: 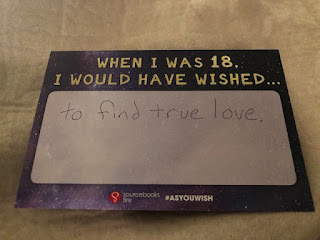 The way the wishes seemed to work, I probably would have found true love, only it wouldn't have been for me.  Or I would have found them after I'd already gotten married, or they'd gotten married, or something like that.  While I don't agree with the decision Eldon made with the out of town people, or necessarily with what he ended up doing with his wish, it was extremely surprising and kept the story unique.  A good book to definitely make you think about how wishing isn't maybe the right way to get things.  How it is more important to maybe work for the things you want, how they will mean more.

What if you could ask for anything- and get it? In the sandy Mojave Desert, Madison is a small town on the road between nothing and nowhere. But Eldon wouldn’t want to live anywhere else, because in Madison, everyone gets one wish—and that wish always comes true.Some people wish for money, some people wish for love, but Eldon has seen how wishes have broken the people around him. And with the lives of his family and friends in chaos, he’s left with more questions than answers. Can he make their lives better? How can he be happy if the people around him aren’t? And what hope is there for any of them if happiness isn’t an achievable dream? Doubts build, leading Eldon to a more outlandish and scary thought: maybe you can’t wish for happiness…maybe, just maybe, you have to make it for yourself.

Under the Lights (The Field Party #2) by Abbi Glines: 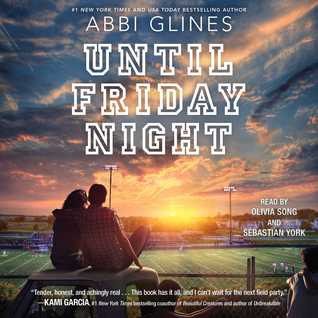 Okay, I was listening to this right before I had a day I was home cleaning all day, and that day I listened to the audiobook as I cleaned.  Let me tell you, there were parts at the end that made me cry, actual tears streaming down my face.  While in the first book, Until Friday Night, we really had some pretty good parents, or guardians/aunt and uncle, in this one, we have crappy parents of our two main characters.  Now, actually we have three main characters, but one of them, Brady, we know from book 1 and he has great parents. But Willa and Gunner both have horrible parents. Fortunately Willa has come home to stay with her grandmother, who does love her.  And her grandmother has always had a special place in her heart for Gunner, as she works for his family.  In a way it is a love triangle, but two of them are meant to be together.  And it was clear to me at the start really, although maybe some of them thought the other one would be better for Willa, that didn't mean it was the best plan, or who she would fall in love with.  All the secrets that come out with Gunner's family as well as the horrible things that poor Willa deals with in trying to prove she isn't the girl that her mother thought she was to her grandmother, overall a very emotional book.  I also was very happy to get back to all the characters we'd met in the first book and I look forward to reading the  next book to see who will get together next.  I may be more of a fan of this author than I thought I would be when I tried one of her other series.

In the follow-up to Abbi Glines’s #1 New York Times bestseller Until Friday Night—three teens from a small southern town are stuck in a dramatic love triangle.Willa can’t erase the bad decisions of her past that led her down the path she’s on now. But she can fight for forgiveness from her family. And she can protect herself by refusing to let anyone else get close to her.High school quarterback and town golden boy Brady used to be the best of friends with Willa—she even had a crush on him when they were kids. But that’s all changed now: her life choices have made her a different person from the girl he used to know.Gunner used to be friends with Willa and Brady, too. He too is larger than life and a high school football star—not to mention that his family basically owns the town of Lawton. He loves his life, and doesn’t care about anyone except himself. But Willa is the exception—and he understands the girl she’s become in a way no one else can.As secrets come to light and hearts are broken, these former childhood friends must face the truth about growing up and falling in love…even if it means losing each other forever.