2017 Debut Authors Bash with Giveaway - Featuring Alexandra Ballard Talking about Her Inspiration and Research for Her Debut Novel: What I Lost #17DABash

I'm participating in this fun yearly event once again hosted by YA Reads.  I'm lucky enough to be posting about two authors this year, so make sure to check back later this month for another fun post.  I read What I Lost this past summer, and you can check out my review of it HERE. 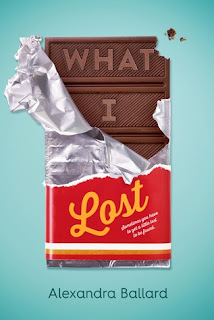 Synopsis:
What sixteen-year-old Elizabeth has lost so far: forty pounds, four jean sizes, a boyfriend, and her peace of mind. As a result, she’s finally a size zero. She’s also the newest resident at Wallingfield, a treatment center for girls like her—girls with eating disorders. Elizabeth is determined to endure the program so she can go back home, where she plans to start restricting her food intake again.She’s pretty sure her mom, who has her own size-zero obsession, needs treatment as much as she does. Maybe even more. Then Elizabeth begins receiving mysterious packages. Are they from her ex-boyfriend, a secret admirer, or someone playing a cruel trick?


This eloquent debut novel rings with authenticity as it follows Elizabeth’s journey to taking an active role in her recovery, hoping to get back all that she lost.
Find it: Amazon, Barnes and Noble. The Book Depository, iBooks, Goodreads


For this post I've got some great information to share with you from the author.  I asked her where she got her inspiration for What I Lost, as well as what kind of research was needed for a book on the serious topic of eating disorders.  Here is what she had to say:

Back in 2012, I joined a writing group and sat down to write, seriously, for the first time. I'd just left my job as a middle school teacher and had this vague idea that I might try to fulfill a dream I'd had since I was a little girl--to publish a book. I had no idea what stories, if any, would come out of me. All I wanted to do was write--something, anything. And for a few weeks, I did just that. I wrote about my life, my kids, my husband. And then, slowly, a voice started to form. It was my main character, 16-year-old Elizabeth, a typical American teenager who was screwing up her life in a big way. She shoplifted from Target, inadvertently gave her friends’ secrets away, constantly fought with her parents, and was, in general, miserable. It wasn’t until a few weeks in did I realize what was really going on with her. She had an eating disorder (ED), like I had years ago, and it was getting worse.
Over time, I realized that the heart of the story wasn’t with Elizabeth’s antics at school or with her friends. It was with her illness and the people she met when she was forced to get help at an inpatient treatment facility I named Wallingfield. That’s when WHAT I LOST was really born.
While the events and characters in the book are all fictional, many of the emotions and feelings (especially towards ranch dressing!) came from the heart.
That said, I still did quite a bit of research not only on anorexia, but also how to treat it. I studied up on everything from what a patient eats at a facility like Wallingfield, to how group therapy sessions are run, to the medical complications, to the latest genetic research, to how to portray EDs responsibly when writing. I spoke to therapists and tried my best to make sure I represented the disease in a realistic, responsible light.
One element that was extremely important to me was that my book do no harm. There are all sorts of guidelines online on how to write responsibly about anorexia. The last thing I wanted was for my book to be able to be used as a how-to guide to not eat, but at the same time, I wanted my novel to be specific and real. I did my best to carefully balance what details and behaviors I included so that readers would get a clear picture of the disease while also not including so much that anybody with an eating disorder would come away with new techniques and tips for restricting his or her food intake. I did have to include some details, like specific weights and meals, so that the reader could accurately picture the characters, but I did so as sparingly as I could.
When I finished writing WHAT I LOST, I realized that this book had been burning a hole inside me, waiting to come out for a long time. That’s what is so fascinating about writing--it’s like a portal into the inner workings of your mind. Maybe that’s why I love it so much. It continually surprises me. I didn’t sit down to write a book about a girl in an ED treatment center, but that’s the story I needed to tell, and so I did, and I am thankful every day for Elizabeth and the rest of the cast of characters in my book. They made me a better person and writer. 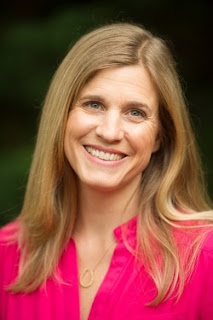 Alexandra Ballard has worked as a magazine editor, middle-school English teacher, freelance writer, and cake maker. She holds master's from both Columbia (journalism) and Fordham (education) and spent ten years in the classroom, beginning in the Bronx and ending up in the hills of California. Today she writes full time and lives in the Bay Area with her husband, two daughters, and two dogs. What I Lost is Alexandra's first novel.
Website | Twitter | Facebook | Goodreads | Instagram
Giveaway:
a Rafflecopter giveaway
Posted by Lisa Mandina at 7:00 AM