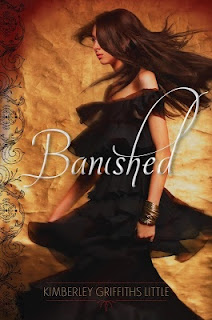 First thanks to Harper Collins and Edelweiss for allowing me to read an e-galley of this title.  I loved the first book, Forbidden, so much, that as soon as I saw this was available, I downloaded it to read.  Once again I'm participating in a tour with Dena from Batch of Books for this series.  If you haven't read the first book,  you need to go click on my link above to read that review, because there is a very good chance that this review of the 2nd book will have spoilers for the first book.  I am glad to say that other than one or two tiny details, I was able to dive right back into the story without forgetting what had happened before. And honestly, those details were very vague already in my head, and I soon remembered them as soon as there was a mention of those things in this story.

We join in with Jayden alone in the desert.  She has escaped Horeb and knows that she must look for Kadesh, even though as far as she knows, Horeb killed him.  But it's obvious that since the story goes on, she will find him.  But he's really injured, Horeb has done so much to him in that fight where he said he'd killed him.  But Jayden doesn't care, she loves Kadesh, and she tells him so.  The tribe that has rescued him accepts Jayden as his future wife, and promise to protect her as well.  However there is at least one man in the tribe that Jayden remembers from when her family's tribe had been attacked in the last story.  But supposedly he has sworn to help with the rest of his tribe.  And the prince of this new tribe, not only does Jayden see him meet with this tribe member, but he seems to be developing a romantic interest in Jayden as well.

The tribe must move on as they soon find out that Horeb is on their tail, he wants to take back his betrothed, Jayden, any way that he has to.  First Jayden will want to save her family.  Going back to her own tribe, Jayden finds them turned against her, thanks to Horeb's mother, and they threaten to stone her.  Only Jayden's grandmother is there, her father has gone back to the city to look for her sister.  Kadesh's friends in the tribe will do their best to help Jayden get as many of her family members back as she can, and then take them all to Kadesh's kingdom, Sariba.  But things won't be the perfect ending and happily ever after once they reach Sariba.  Kadesh hasn't told Jayden everything, and there will be obstacles to face in order for things to go the way they should.

The end of the book leaves us wondering how Kadesh's tribes will fight off Horeb.  After having dealt with some betrayal, soon they will have to fight members of their own kingdom who have their own sights set on the kingdom.

Once again I fell back in love with Jayden and Kadesh, although the bit in the kingdom, when we learn of Kadesh's secrets, it was emotional.  I did cry.  Such great emotion in this story.  I love all the historical parts especially.  The stoning, the worship of different gods, and even the locations are so fascinating.  Once again I love how the author gives some insight into the history at the end of the book.  We just finally got our copy of the first book in the library for my students to read.  I can't wait to get this second book ordered and added to the shelves for my students when they finish the first book.
Posted by Lisa Mandina at 11:09 AM