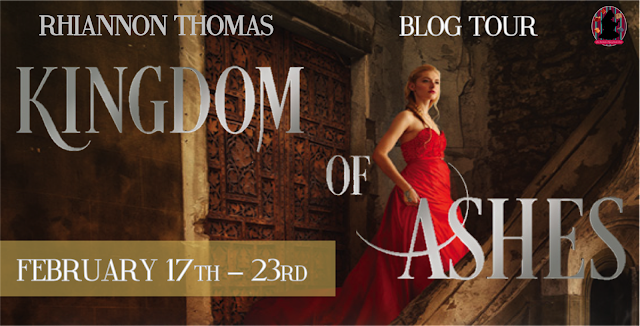 Asleep for a hundred years, awoken by a kiss, Aurora’s life was supposed to be a fairytale. But since discovering that loyalty to the crown and loyalty to her country are two very different things, Aurora knows she can only dream of happily ever after. Once the enchanted princess, savior of her people, she is now branded a traitor.

Aurora is determined to free her home from the king’s tyrannical rule, even if it means traveling across the sea to the kingdom of the handsome and devious Prince Finnegan—someone who seems to know far more about her magic than he should. However, Finnegan’s kingdom has perils of its own, and any help he gives Aurora will come at a price.

As Aurora and Finnegan work together to harness her power—something so fiery and dangerous that is as likely to destroy those close to Aurora as it is to save them—she begins to unravel the mysteries surrounding the curse that was placed on her over a century before…and uncover the truth about the destiny she was always meant to fulfill.

Brimming with captivating fantasy and life-threatening danger, the sequel to A Wicked Thing takes Sleeping Beauty on an adventure unlike any she’s ever had before.

First I have to say thanks to Harper Teen and Edelweiss for allowing me to read an e-galley of this title.  The first book in the series, A Wicked Thing, is one that I really enjoyed the unique way the author re-told the story of Sleeping Beauty.  And the story went in such a different way than I could ever have guessed, leaving me hanging to know where this second book would go.  If you haven't read the first book, I can't promise there won't be spoilers for that one in my review here of the 2nd one.  So you should stop reading my review, and skip on to the stuff about the author and giveaway down below.

At the end of the last book, Aurora ran away from Prince Rodric and his power-hungry father.  But not before she let loose the fire magic that she had learned she had.  She has run away, and has the help of someone unexpected, Nettle, a girl that had helped with the rebellion group she'd met through Tristan.  It turns out though, that Nettle is actually a spy for Prince Finnegan.  Nettle brings Aurora to him and his kingdom.  Knowing that maybe his mother, the queen, can help her out.  But she knows that she wants to keep not only herself, but her kingdom as well, safe from the witch Celestine.  While she is in Finnegan's kingdom, she will learn more about the history of Celestine as well as the original witch, the one her own kingdom is named after.  She will venture out to see the dragons, and learn that maybe she has an affinity with them, since her powers are fire related.  Finnegan will help her work to control her powers, and together they will work to get her ready to go back and take back the kingdom that is rightfully hers.  It won't be easy though. Once again she'll have to figure out who can she really trust.  And Celestine will be close by, leaving a threatening message showing it even.  Even Finnegan's mother may want to use Aurora for what she can give to her kingdom, whether it is good for Aurora, or Aurora's kingdom.  And the dragons themselves, can Aurora learn to control them with the connection she feels?  Or is it all a farce, a show being put on by Celestine to trick Aurora into doing what she wants?

As the story came to an end, I knew there were still many things to be settled.  While a lot of questions had been answered in this book, many more were created by the end of the story.  So thank goodness that there will be third book in the future.  Again this definitely goes in a way different direction than one would think for this story, but I loved how the author still tied in little bits of the original story to keep you feeling as if it was that familiar world you came to know in the original Sleeping Beauty fairy tale.

Follow the Kingdom of Ashes by Rhiannon Thomas Blog Tour and don't miss anything! Click on the banner to see the tour schedule.

Rhiannon Thomas is a recent graduate from Princeton University, where she studied English and Japanese, and smuggled bubble tea into the library on a regular basis. She now lives in York, England.

As well as reading and writing YA fiction, she runs the blog FeministFiction.com, where she discusses TV, books, and all kinds of fannish things from a feminist perspective. 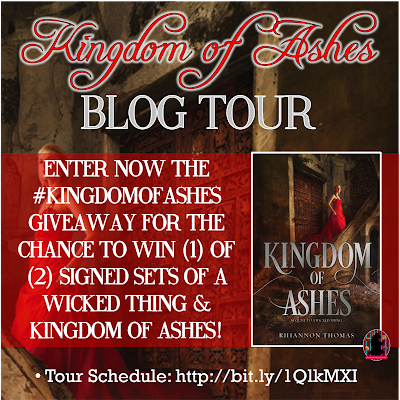 INTERNATIONAL | Read all the rules written on the rafflecopter