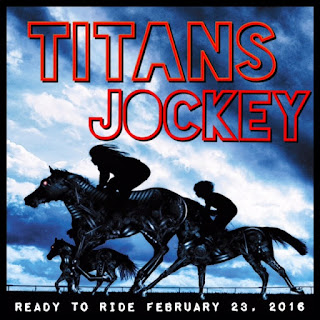 Hello everyone, and welcome to my review of the fabulous new book by Victoria Scott.  As a Titan Jockey, I was lucky enough to get an advanced copy of the book in the mail.  This is the first thing I saw: 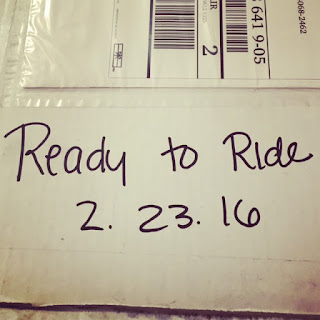 When I opened it up, not only was the ARC in there, but a really cool poster as shown below (couldn't find the image anywhere other than my Instagram, so that's what you get!): 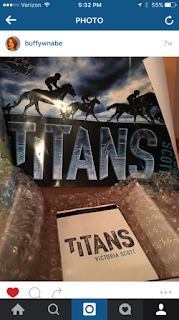 Of course I wanted to start reading as soon as I got it. But alas, I had such a list of review books I had to get to.  And that worked okay, just because now I get to share all my love of the book with you closer to the actual publishing date. Which also means there will be a giveaway!  I loved the book so much that even though I wasn't supposed to order any books published after February 16th with my last bit of library budget money this year, I asked for a special exception just so that I could hopefully get this in my school library before the end of the year, to share with my students. 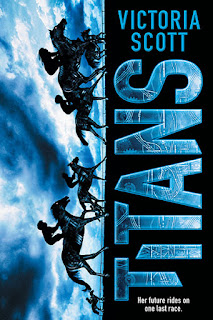 First I will thank the author for picking me to be one of the V-Mafia members that got to be Titan Jockeys.  Then I will thank the publisher, Scholastic, for sending me an ARC to read.  Now I will admit when I first heard a little bit about the story, I thought it sounded exactly like The Scorpio Races by Maggie Stiefvater (which isn't a bad thing, as I love that book and author).  But then I read the full blurb about it, and saw that other than a "horse" race, it really was nothing like it.

The story takes place in a future time from now.  At a racetrack in Detroit where mechanical horses, more like robots, but very lifelike, will race.  It is kind of a once a year type of event.  Several races that narrow down the field to just a few, who will race for the big pot.  It's not cheap to enter though.  And you have to be able to afford one of the horses, or Titans as they're called, as well.  Astrid is our main character, and she has been obsessed with the horses since she first saw them.  Unfortunately, she comes from a poor family.  Her father has been out of work for a long time, since the factories aren't doing so well these days.  , and even worse, at one time her grandfather gambled away their money and house.  Because of his mindset, he will not allow Astrid's mother to even look for a job to help support the family.  Of course the first time they lost almost everything, when they had to move, Astrid moved close to her best friend, Magnolia.

The track is really not a place for kids, teenager or not, as well as it's not really a place that a lot of women hang out.  But every year, Astrid and Magnolia sneak to the track to see what they can catch of the training and riding of the Titans.  This year at the track they see one jockey riding.  And he's kind of a jerk, telling them to get lost basically.  Then they see an older man who seems to be not doing that well in the heat.  Even though he's kind of a cranky old guy, Astrid helps him out.  Soon there's a big surprise announcement that they will choose one person to enter without the fee.  It's about this time that Astrid is walking down the street and sees the cranky old man working in his garage on what looks to be an old, run-down Titan.  It's not quite the same color and it is just different.

Turns out the old man was one of the people who first worked on the Titans, and the one is his garage is one of the original models.  He asks Astrid to be the jockey.  She agrees, and that's where the training starts. The old man, Rags, takes her and the horse out to a friend's house.  Barney was also one who worked on this original Titan.  When they get it ready and turn it on, it takes off, and they have to catch it.  Seems the autopilot button hadn't been switched off.  Now Astrid has to learn to ride it and how to control it.  The Titans can be dangerous, Astrid has seen at least one death, and there have been many others.  They have to get her good enough, and the horse fast enough, because if they don't do well enough in the qualification race, they won't get a sponsor, and it could all be over.

I won't go into the story too much more.  You know they have to qualify and get a sponsor.  But the sponsor they end up with will add a whole other aspect to the story.  The other jockey they met earlier is young, and still very snotty, but he tries to use Astrid to help his own rankings with the press by kissing her in public and acting as if they are dating.  At home Astrid has so many  other problems with her older sister and her deadbeat boyfriend.  Her father who doesn't seem to care about Astrid at all anymore, and her younger sister who begins to feel left out.

The friendship between Magnolia and Astrid is wonderful.  I love all of the characters.  Hart, the other jockey that is kind of a jerk, I like him, although I don't know that I'm completely happy with where the story went with him.  I'll just say that the one issue I had with the story is that I wanted more romance.  For Astrid.  I get that stories don't always have to have romance, but I like the way this author can add it to stories, (Dante Walker, anyone?) and so I was a little sad to not have that really take place in the story.  However, the story was great, I love the idea behind the Titans, and I fell in love with Astrid's horse, and loved watching her do the same.

And I have to share the picture of when I got to meet the author back in 2013 at the Romantic Times Convention. 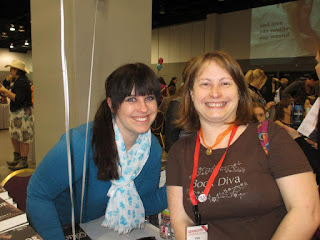 A great new standalone story from Victoria Scott.  Sign up below to win your own copy!  Or, just go buy your own copy when it comes out on February 23rd.