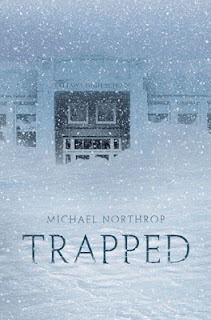 I got this book a while back at my school's Scholastic Book Fair, and pulled it out back in January to read.  I've been keeping it in the master bathroom for during bubble baths, because either the book I was reading was too big or I was reading on my Nook, and I don't want to have that near a tub full of water!
The story is about a group of teens who get snowed in at school.  School gets let out a bit early because of the coming blizzard, but a few of the boys decide to stay to work on their project in Shop Class.  One guy is there because of detention.  And there are also a couple other students left there, waiting to be picked up.  For a short time there is a teacher there with them, but that first night he goes out looking for help, and he never comes back.  Scotty is a sophomore, a basketball player.  He and his friend Pete and Jason stay because they figure Jason's dad will be able to still come pick them up even with the snow.  Les is kind of the guy who is trouble, he was in detention.  And is really pretty scary.  Krista and Julie are the girls that are there.  Scotty thinks Krista is really hot, and Pete is interested in Julie.  As they stay there, the snow doesn't stop, and soon they realize the teacher isn't coming back, and no one is coming to get them at least tonight.  So they spend the night there.  But then the power goes out, which means even with a back up generator, soon that goes out.  And the snow keeps coming down.  They're fortunate that of course the cafeteria has food for them.  Eventually of course the pipes freeze, not to mention with no lights and no heat, the bathrooms get to be freezing inside.  The longer they are there, the colder it gets, and soon they decide to build a fire in one of the classrooms, and they have to figure out how to have a bathroom.  They have no other clothes.  Although, I wonder why they don't try to get the keys to the lockers from the office or somewhere so that they can look for clothes in other people's lockers.  They do go to the nurse's office and find blankets.  Soon the snow gets so high that the windows on the first floor are covered.  And so they move to the 2nd floor of the school.  Soon they hear the roof start making noises, and things just don't seem to be getting any better.  Their cell phones don't work, but that's not that unusual, they don't really get that great of reception there usually.  They find a radio in the office that they use to listen to find out what is going on.  And it doesn't sound that great out there.  Then one day, when they've begun to feel really desperate, they see a helicopter in the distance.  At this point they begin trying to think of how to get out and get someone to know they are there.
The story ends pretty quickly.  And we don't get to find out what happens to everyone.  But it is a good story.  Not thinking people in the way of Nemo want to read this right now, but may be feeling some of the same things!
Posted by Lisa Mandina at 9:08 PM