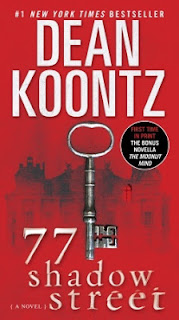 My first "adult" book of the year! I told myself that this year I need to try to read at least one adult book a year, as I mostly read Teen/YA.  And this book was good, but I know now why I read so many more YA these days.  I realized just how wordy Dean Koontz can be.  Some sections just went on and on, and I was ready to get to the point.  In fact, I'm sure I skipped a bunch of paragraphs, and sometimes had to go back, because I was skimming trying to get on to some actual action.  It makes me think about how I'm teaching my students about figurative language in my Communication Arts class right now. Figurative language is great!  Helps you feel like you're right there in the story sometimes!  But too much can be a bad thing.  Whole paragraphs or pages even.  Okay, I did enjoy the book, it was a pretty good story, so let me talk about that now.

I figured there would be more to do with short story The Moonlit Mind that I read last year, and that made me very excited to read this book.  There wasn't, and maybe I need to re-read the short story, but I don't quite see the connections.  I'll have to read it again.  Anyway, as many Dean Koontz books do, we followed several different characters.  All of which live in a huge mansion turned into condos, called The Pendleton.  Every 38 years strange and terrible things happen.  Murders, people disappear.  And this is the 38th year coming up.  Strange things start happening.  People see ghosts from the past, the years that people disappeared.  There are strange shapes swimming in the pool.  When they look outside, during the thunderstorm, sometimes the lightning lights up showing there is no city out where there should be.  All of the people we meet begin experiencing things.  Some have worse things happen.  And some are able to figure it out better.  We of course have one evil character, a murderer, who all of them are locked in with.  We have two children with single moms. We have a former military man, two elderly women, a woman who lost both her parents to lightning strikes.  A woman who was a country singer, a man who grew up in Viet Nam during the war, and a scientist?  There is also one guy researching the history of the Pendleton.  Eventually the curse or time warp or whatever goes all the way through.  In this other dimension, or the future as we learn, there is The One, who is like a god in a way, controls everything.  There are no humans, other than one named Witness, although he is not technically human.  One of the characters recognizes him, and we find out exactly what has happened.

One other issue I had is that while I feel there was a ton of build up and all, that we get to the end we're barely let in on what the actual deal is, and then we're back in the present and it's kind of over.  I liked the way it ended, again, don't get me wrong, just was a bit anti-climactic.  Not a bad Dean Koontz book, just hard to read that kind of book again with what I've been reading lately.  And hey,  some of those YA books are big too, think of Divergent!!
Posted by Lisa Mandina at 3:13 PM