The Immortal Rules (Blood of Eden #1) by Julie Kagawa 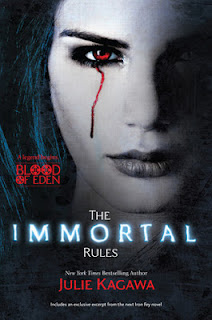 Okay, once again I have been totally wowed and am asking myself why in the world I waited so long to read a book by this author.  Now, I must admit the other series by this author, is about Fey, and I'm not really into the fairies that much.  Not that I haven't read any good books about them or with them, I just haven't quite gotten to the stage where I'll go pick them up.  As I've mentioned before, I got this book at BEA last summer and actually got to meet Julie Kagawa, but didn't get her autograph.  Hmm.  Not sure why.  Maybe I'll get another chance.  In fact, wonder if she'll be at the Romantic Times Convention in Kansas City in May since her books are by Harlequin Teen.  Cool, I'd better go check my list of what authors are going to be there!
This book, let's just say it sucked me in right away and I was hooked!  And it was awesome to start reading it during the big snow storm so that I had all the snow days off of school to really get it read.  Now, I've also mentioned that I don't always jump at any and all vampire stories.  And often the idea of a world where vampires rule, etc., just doesn't draw me in.  But this was done in a way that we weren't in with the vampire society all the time, we were following the main character, Allie Sekemoto, who lived in the Fringes around the vampire city.  With people who chose not to be registered, so they weren't required to give blood weekly, or monthly, or whatever the requirement was.  She wasn't a "pet" of the vampires, so it was like a post-apocalyptic world, the kind of story I do enjoy.  Allie and the "gang" she lived with had to fight for their territory sometimes, and also had to try to find their own food.  One day Allie went outside even the fences that surround where she lives with her gang, into the area that is full of rabids.  Rabids are vampire/zombies that people became from the Red Lung disease that I read about in 'Til the World Ends.  Out there she found a whole shed/basement FULL of canned food and all kinds of good stuff.  When she takes her friends out there, after her own close call with a bunch of rabids, something goes wrong and they get attacked.  As they try to run back to the fenced in area, two are killed, and as Allie tries to get back, she is overtaken by the rabids and passes out while being fed on.  She awakes to the sound of a voice, the voice of a vampire.  He is offering her a choice.  He can end her pain by giving her a quicker death, or he can end her pain by turning her into a vampire, still a death, but she gets to keep her life going.  She chooses to become a vampire.  Once she changes and wakes up, her vampire maker, Kanin, begins to teach her the rules of being a vampire.  And how to fight, etc.  She learns that he is hated by the other vampires, for his role in the past which caused the rabids to form in the first place.  And because of this he is hunted.  When it seems they have been caught, he sends her away, out of the town, past the fences, because anyone knowing she was related to Kanin would kill her.  So as she is travelling, she runs into a group of humans.  She is able to fit in because they have learned to travel at night,  which works for her because she must sleep all day and stay out of the sun.  She has to try to fake eating, etc.  But she is happy to be surrounded by humans, and to do what she can to help them.
Of course, as you know must happen, she will come to be found out eventually, and she must decide whether to try to help them from the sidelines, or go on her own way.
The story reminds me also of road trip types of stories, like The Stand, The Long Walk, Swan Song, and even a bit of shows like The Walking Dead.  A group of survivors trying to get somewhere, always distrust between some, dangers, like rabids, or vampires, or people working for the vampires.  No food, etc.  I love, love, LOVED the book!  I'll definitely be recommending it to people, and eagerly awaiting the sequel, The Eternity Cure, due out this April!   So happy I don't even have to wait that long!
Posted by Lisa Mandina at 6:40 PM