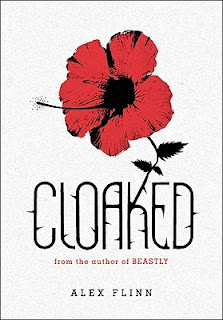 While I've seen the movie Beastly which was based on the book by this same author, Alex Flinn, this is the first actual book I've read by her.  I do really enjoy fairy tale re-tellings, and this actually several tales in one. And, as is a bit of the problem I had with Two and Twenty Dark Tales, a book I was able to get from Netgalley, but then couldn't finish, some of the stories are not well known ones.  It's hard to really get into something that you can't relate to, at least when you're expecting a well known fairy tale.  From the title, Cloaked, I just kind of assumed maybe it was about Little Red Riding Hood.  But no, it was not.  The main story was kind of about The Frog Prince, and that is well known.  It was just several smaller tales mixed in.  And really, they did all work in a way.
The main character is Johnny Marco.  His family has always worked on shoes, and so we kind of start with The Elves and the Shoemaker tale.  Just that we have Johnny who designs shoes.  He is really good at the designs, but doesn't really have the materials or money to try to make and market them. A beautiful princess, Victoriana has come to the hotel to stay.  She ends up seeing something good in Johnny, and decides to ask him to help her find and rescue her brother who has been turned into a frog.  She gives him a cloak to help travel from place to place in an instant, hence the title.  In his travels to find the frog, he must try to help the swans at the hotel, then a fox at a motel, then a park ranger with a giant problem.  All during this time he is being chased by witches.  His best friend Meg, ends up being more of a help than expected.  At one point being summoned to help him by Johnny putting on a ring, to where she is now with him in the middle of the adventure.
All the different issues do end up getting resolved in one way or another.  It is a fairy tale after all.  And I like the way it all gets wrapped up.  There even Brownies, not the yummy chocolate ones, but the little elves.  And Johnny gets a chance to live his dream, even after turning down marriage to Princess Victoriana.  So a fun fairy tale read!!
Posted by Lisa Mandina at 4:36 PM