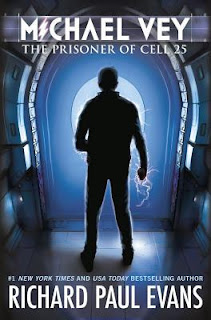 Okay, I have to say first off, for some strange reason, when I first saw this book, the name made me think of that football player that was using his dogs for the illegal dog fighting.  But that's Michael Vick, right?  Anyway, the cover didn't draw me in.  And I never thought I really wanted to read it.  In fact, when it was on the list for this year's nominees, I was like, aw man, now I have to read it.  But, once again, so glad that I did have to read it!  Because this is a really good book, and once again, as there seem to be less books with male protagonists, this is a good one for the boys out there.
So, the subtitle, The Prisoner of Cell 25, actually doesn't really show up in the story until later.  But our main character is Michael Vey.  A 14 year old who gets picked on.  And the principal at his school is kind of a jerk.  It seems to be the kids who are being bullied that get in trouble.  For being locked in their own lockers.  It just makes me shake my head as an educator to read or hear about stuff like that.  But anyway, he has a friend named Ostin, pronounced like the city, who is pretty nerdy.  There is a cheerleader at school that Michael has a bit of a crush on.  One other thing, Michael has Tourette's syndrome.  Not like you see on tv or movies where they shout out bad words, but his occurs as blinking, or gulping.  So he figures the cheerleader, Taylor, would never be interested.  But she does seem like she's one of those girls that really are just nice as can be.  One day Michael just decides he's had enough.  He's got detention for a week for being locked in his own locker upside down, and since he won't tattle, because he knows then he'll get bullied worse, he's so angry when these bullies start following him after detention and accusing him of being a snitch.  Well, Taylor sees this happening, and yells at the boys to stop it.  But when they don't, Michael brings out his other secret, he can send electricity out from his body, and he does, into the bully Jack, and then Wade, and Mitchell.  Taylor sees, and now is curious.  Up until now, only Ostin, and Michael's mother knew about his powers.  Turns out that Taylor has her own powers and is curious.  But no one knows about hers.  They form a club, the Electroclan.
Unfortunately, as they try to do some research into how they may have gotten their powers, there are some mysterious people out there looking for them, who now find them.  At first they try to woo them with scholarships to a fancy school called the Elgen Academy in Pasadena, CA.  Well when Michael and Taylor both refuse, turns out the Elgen Academy doesn't take no for an answer.  Taylor gets kidnapped, and they try to do the same with Michael, but instead it turns out that they can't get him in time, so they take his mom in order to get him to follow.  So of course Michael does.  He takes Ostin, and now convinces the bullies, Jack and Wade, to drive them out to California.  Over the journey they kind of become a little bit better friends.  And while the deal is just to drop them off and leave, Jack and Wade end up staying to help.  But help leads to getting caught.  When Taylor first gets to Elgen, she learns she has a twin sister.  So the big guy, Hatch, tries to convince her to stay and be a apart of it all.  Shopping on Rodeo Drive.  Taking her to a concert of her favorite singer.  But once there, Hatch asks Taylor to do something, she does it, but feels horrible after.  Then they go to another event, motorcycle races where Hatch asks her to keep a guy from winning.  But doing it could kill him, and so Taylor says no, but her twin does it for her.  Taylor is punished by being sent down with the other electric kids.  And this is where Michael must try to rescue her from.
This was a really good story.  I won't tell you anymore.  I'll let you read it, but I can see a lot of kids enjoying it.  It does have a sequel out at the store already.  It'll be on my TBR list.
Posted by Lisa Mandina at 4:21 PM