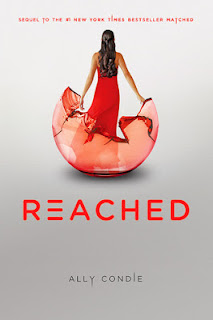 I was so eager to read the conclusion to this series that I checked it out from the bookstore where I worked and read the over 500 page thing in just a smidge over 3 days.  And I wasn't disappointed at all.  We learn soooooo much more about the society, as well as the Pilot, and our characters backgrounds, Ky and Xander specifically, that we didn't know before.  I mean really we knew quite a bit about Cassia, as she was kind of the main character to start with.  I loved how this Society kind of met it's match with the whole Plague.  It was an interesting way to show that what they thought was best for everyone, was not really.  And that even though they knew this could be an issue, they didn't take the time to make sure if it did ever become an issue they could really solve it and make sure it didn't become the disaster it did.  One thing in the book that I didn't necessarily remember from the first book is that not only were there only the 100 paintings saved, and 100 songs, 100 movies, etc., there were also the 100 science lessons.  And wow.  I just can't imagine only 100 science lessons. There are so many facts in science that to shorten them to that?  And then to hear that the people in the Society didn't realize just what the world was really like because of what the Society deemed to be the most important science lessons.  I loved going back to all the little clues there were in the past that added up to the final cure.  And we did even learn some things about Cassia's past that she had even "forgotten".  While I will say this book did seem a little long, it wasn't that it became uninteresting in any part or anything, it just seemed maybe a little longer than necessary.  But as you can tell, it was interesting enough that I couldn't get through it fast enough!  IN fact, if I could have, I would have taken it with me to read in line at the Breaking Dawn Part 2 premiere.  Of course it turned out we were able to go at 10:30 instead of midnight, so didn't have quite a long a wait as in the past.
Normally I'll give a bit of a summary of the book in my review, but I just feel to do too much summary would give away too much of the story.  Basically Xander, Ky, Cassia, and Indie were all working for the Rising, and the pilot now, but each in their own way.  Xander as an "Official" more specifically a medic type for the society.  Ky as a pilot with Indie.  And Cassia as a sorter.  Xander ends up being in a center when the Plague begins.  And is able to help a lot of people.  And even is helpful when the plague mutates.  Ky is able to fly the cure into villages to help save people, and later the immunizations to try to prevent the plague.  In the end it is Cassia's sorting that even helps to find the true cure.  Her sorting, and memories from her mother's work with plants in the past.  While there are deaths that are very sad, it is part of the story, and works well.  So I just have to say you probably won't be disappointed in this book if you are a fan of the trilogy.  It is a good ending to the series.  And was well worth the wait.
If you'd like, you may read my reviews on the first two in the trilogy here:  Matched, Crossed.
Posted by Lisa Mandina at 6:22 PM