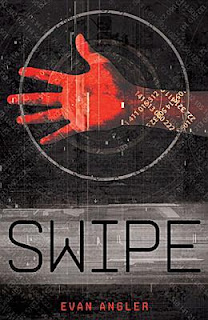 I want to say thank you to both Netgalley and Thomas Nelson publishing for letting me read an egalley of this book.  This was a very good story, I liked all the technology and the back story, and the characters were good too.  However, I picked this book to read because I am a huge fan of the Left Behind series by Tim LaHaye and Jerry B. Jenkins.  I mean I knew about the "mark" and all that before I read the Left Behind series, but since that book it has really kind of been something in the back of my mind.  And I guess that series kind of has shaped my beliefs and thoughts on those stories from Revelations, so much though that events in the past four or five years even reminded me so much of things from the book that I began to wonder if we were in those times.  :-)  Now, I was a bit confused with this story.  Our main character is Logan, and he is nervous about getting the mark because when his sister went to get it, something went wrong and she died.  And ever since then he has felt very paranoid that he is being watched.  The other main character is Erin who has just had to move away from her big city life because her father must go to the small town that Logan lives in, because there is a big case dealing with someone named Peck.  Erin looks through some boxes her father left sitting out at their new place, and becomes involved because she figures the sooner this case is solved, the sooner she can move back to her home and her family can go back to normal.  Turns out Logan isn't just paranoid, he is being watched, and it is by the group that Erin's father is trying to catch.
The story was really good as I said at the beginning of this review.  However, what I don't understand is how the people not getting the mark are acting.  Yes, I understand that to the main society they are thought to be "losers" and the scum of the Earth. That is the whole story.  But really there is really only one or two parts that even allude to the mark having anything to do with religion and God.  I did like that the "warehouse" that Peck was staying in was so obviously a church, and that the kids didn't really know what it was due to how the world had changed while they grew up.
But this is obviously going to be a part of a series, so I'm eager to read on and see when we get to the point that we pull these things into the story.  I guess I just assumed that a book from this publisher would be more religious, but maybe that is the point of not putting it so in your face, so that more kids will read it.  I do know I will recommend it to the kids who liked the Left Behind series for kids!
Posted by Lisa Mandina at 12:00 AM