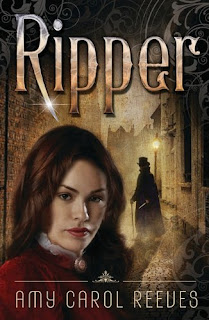 First I have to say thanks to Flux Books and NetGalley for letting me read the egalley to this book.  As I have mentioned before, I have been fascinated with the whole Jack the Ripper story for as long as I remember, and was really drawn in by the movie From Hell with Johnny Depp and the book Portrait of  Killer by Patricia Cornwell.  Recently there was the book The Name of the Star by Maureen Johnson that also touched on the topic.  So when I saw the egalley of Ripper on NetGalley I had to request it.  And I have to say that I really liked this book.  There was a new take on who Jack the Ripper was.  And it included a somewhat detailed backstory, similar to the one in the Johnny Depp movie in some ways.  I did have one complaint, which I'll voice first, then I'll go on and talk some more about the story.  First, the author was trying to put romance in the story, which is fine, but it's like she was trying to get into the whole love triangle bit, and the way it was done, well, I just wasn't impressed.  There were lines about how Abbie, the main character, would blush and get all flustered around actually 3 different men in the book.  Okay, I do that, so that's okay, but it was just the way it was written, and I don't have any actual quotes, but it reminds me of all the bad things people say about Twilight, (which remember I love the Twilight series and don't really see what people are saying).  And it just seems to me that more authors would try to stay away from that so that people wouldn't say that, and this seemed to take that to the extreme.
So that's the one bad thing, everything else about this book I really liked.  We have Abbie, who has lost her mother, and has now gone to live with her grandmother on her mother's side.  Her grandmother had disowned her mother for marrying an artist and running away.  She now wants to make up for that with Abbie, so that she doesn't lose her as well.  But she still wants Abbie to grow up in the lifestyle she is such a big part of.  Her grandmother is wealthy, and in the social circles.  After Abbie complains of being bored with this leisurely lifestyle, her grandmother sets up for her to work a week or two with a doctor over at the Whitechapel Hospital so that she will learn to be grateful for her life, at least that's what her grandmother hopes she will take away from it.  But Abbie has grown up with quite the education while her mother was a governness.  She has learned to fight on the street, and how to take care of herself, as well as think for herself.  And going to the hospital only makes her want to become a doctor.  It is at the hospital that she meets two of these men that she finds attractive and become her love triangle.  She also is taken under the wing of the lead doctor here who encourages her to follow her dream of being a doctor.  While she is there the Jack the Ripper murders begin.  And Abbie learns that she has visions, and that her mother might have as well.  She soon learns that her mother didn't tell her a lot of things, and that her past wasn't quite what she thought.  As she tries to solve the murders that she is seeing in visions, she gets involved in something that wants her to become a part of it, and now her life, and her friends and family are in danger.
Great thought out story, great read, can't wait to promote it!
Also, this will be the R on my A-Z Reading Challenge.
Posted by Lisa Mandina at 9:46 AM