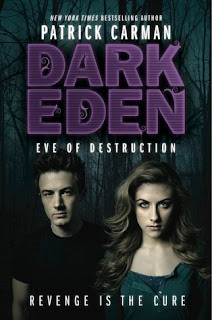 I was lucky enough to get an advanced readers copy of this when Kristi at the Story Siren was cleaning out some of her shelves.  I was excited to get this as I hadn't read the first Dark Eden yet, and so I figured I could read them right in a row.  I did really like the first one.  And it ended in a way that could have been done, but also left with hanging questions, and a way to come back, and the story came back in the sequel perfectly.  At the end of the Dark Eden our seven who have been cured, all of them have been left with a side effect, which Will Besting knows why, but he has not let all the others in on the secret.  Well, one other does know, Avery, and that is because she is now with Rainsford.  Mrs. Goring has called the other 6 back to Fort Eden.  She says she has a cure for the side effects they have, as well as a way of stopping Rainsford.  Only, of course, she is still a part of his family, and does have her own evil reasons for doing all of this.  And so she traps them in what used to be a nuclear missile research underground lab and silo.  And forces them to figure out how to get to where the vials from their cure have been stored without dying.  It is a dangerous place to be, live radiation, huge holes that lead into polluted water, etc.  And come to find out, Mrs. Goring hasn't just invited them back, she's also trapped Rainsford and Avery in a room down in the underground.  And Rainsford gets out and throws yet another danger into the mix, because he doesn't want them to get the cures, because it will destroy him if they follow through with Mrs. Goring's plan.  Mrs. Goring has learned well and even improved her husband's devious cures, and now we have a new player in the game, Amy.  Who is once again, not who she seems.  I'm sure there could be a sequel to this, even though it seems to have ended with Will returning the final Goring 7 cures to their owners.
This has all the immediate links as you read through it, like inks to watch the cures that we read about in book 1 to start with.  I haven't gone to look at them yet, but I'm sure they will be really cure.
My only issue was that this ARC was missing pages 199-214.  And from the difference in where the story was on page 198 to what was happening on page 215, I know I missed some major action.  This will be one where I do have to buy the actuall book for sure so I can see what really happened!  It didn't totally ruin the whole story, I was still able to keep up with what happened, I just would like to know what events led up to the point where I joined back to the story.
And again, this is a great series to get kids reading, with the interactive links and apps, it will pull in the kids who are reluctant readers, just like Patrick Carman's other books have.
Posted by Lisa Mandina at 11:31 AM